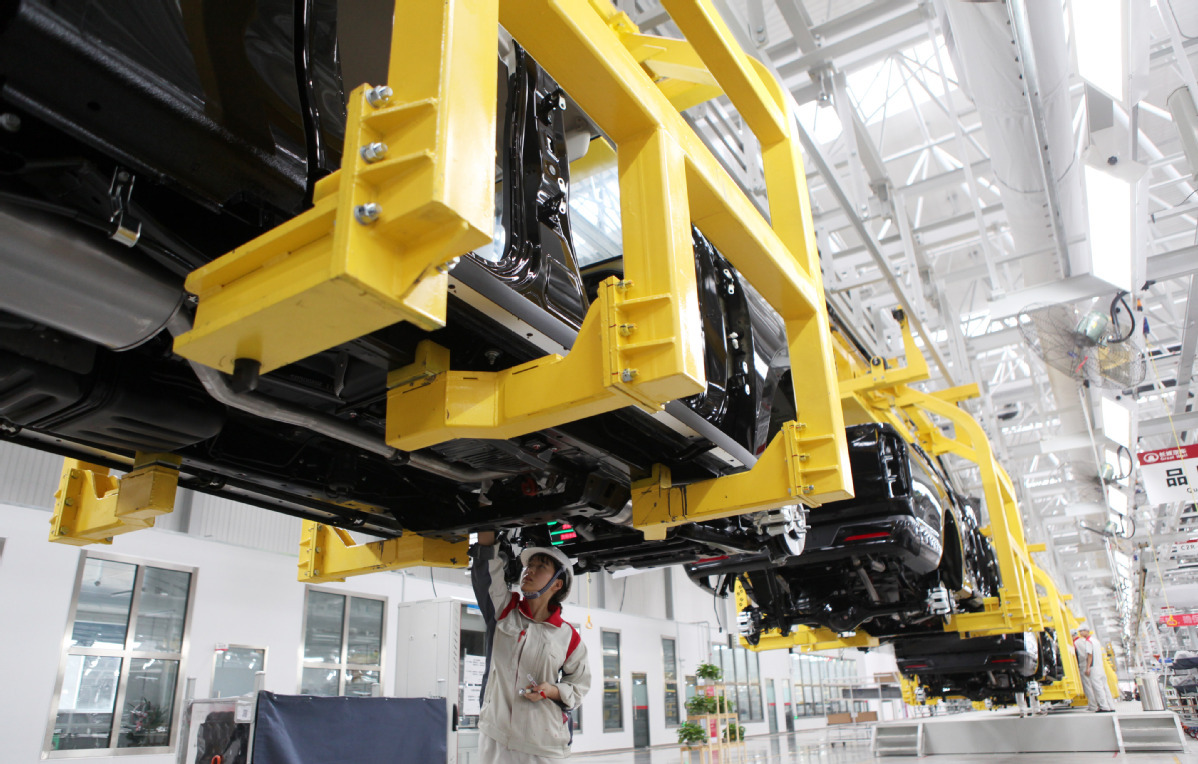 An employee works on the production line of an automaker in Chongqing. (Photo: China Daily)

China's economy has staged a fast recovery from the COVID-19 impact, with the year-on-year GDP growth likely to turn positive at above 2 percent in the second quarter of the year, economists said on Monday.

Business resumption and investment stimulus have been the key ingredients of the economic rebound, while the country still needs to deal with mounting uncertainties while trying to sustain the recovery, they said.

Attention has been focused on the performance of China's economic recovery from the COVID-19 disruption, as the country is set to unveil the second-quarter GDP growth and other key economic data next week.

Leading economic indicators have pointed to a fast recovery mainly driven by supply-side improvements thanks to the nationwide resumption of production, said Wu Chaoming, deputy dean of the Chasing Institute under the aegis of Chasing Securities.

The official Purchasing Managers Index of the manufacturing sector rose to 50.9 last month from 50.6 in May, the fourth consecutive month for the index to remain within the expansion territory, according to the National Bureau of Statistics.

The growth in industrial output for the first half of the year may be around negative 0.8 percent year-on-year, sending the GDP growth for the same period to negative 1.6 percent, versus a 6.8-percent plunge for the first quarter, Wu said.

He said that the GDP growth rate for the second quarter may be around 3 percent.

The recovery in demand, however, may have lagged behind, Wu said, as impaired income prospects of businesses and households and the continued social distancing measures weighed on the recovery in manufacturing investment and consumption.

Looking ahead, infrastructure investment backed by government bond issuance may become the backbone of expanding demand and is expected to grow by around 18 percent for the whole year, Wu said.

On top of infrastructure investment, property development investment is expected to be another pillar in investment recovery amid rather favorable policy conditions, Hu said, adding that consumption in the offline services sector is also expected to further recover as social distancing measures ease.

The faster-than-expected economic recovery has helped fuel the recent surge in the A-share market, analysts said. The benchmark Shanghai Composite Index has risen by 11.67 percent since the beginning of the month and closed on Monday at 3332.88 points, the highest level in more than two years.

However, analysts said uncertainties still exist in the second half of the year and could threaten the strength of economic recovery, with the epidemic control situation remaining the biggest unstable factor.

Given that the country has become more experienced in dealing with the disease, it is unlikely to see another major disruption comparable to the one that occurred at the beginning of the year, said Ying Xiwen, a regional economics researcher with China Minsheng Bank.

"But a full economic normalization could be hard to achieve as regular epidemic control measures may continue and even intensify in the fourth quarter as the weather cools down," Ying said.

China's economic growth may recover to around 5 percent in the second half of the year, further recovering from the projected 2.9 percent for the April-June period, he said.

Analysts with Nomura also warned that the possible deterioration of external demand and the trade row with the United States could weigh on China's economic recovery.

"Some pent-up demand will naturally lose steam and exports may fall significantly when demand for medical exports peaks and the slump in new exports orders finally reduces production," they said in a report.