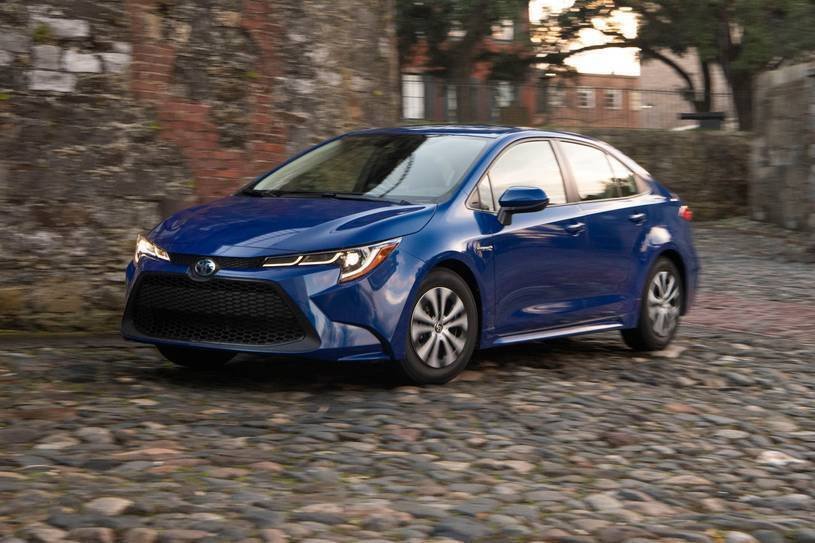 Both deliver an EPA-estimated 52 mpg in combined city and highway driving, which is among the best of any vehicle on sale. They’re also notable for their design. These are two conventionally styled sedans that largely keep their eco-credentials hidden from view.

Even better, both come well-equipped at a starting price of around $24,000. Edmunds compares the Insight and the Corolla Hybrid to find out which one is the superior fuel sipper.

Toyota has redesigned its Corolla sedan for model year 2020. Compared to the old Corolla, it features an improved interior and more refined driving characteristics. The hybrid version uses the same powertrain as the Toyota Prius, which is why it achieves similar fuel economy.

As for the Insight, a more appropriate name would be “Honda Civic Hybrid.” The Insight is essentially a high-tech Civic sedan. It shares the same underlying structure but is modified to accommodate an electric motor and battery.

Both the Corolla and the Insight seat five and have approximately the same exterior size and weight. And unlike some hybrid sedans that have space-reducing trunk-mounted hybrid batteries, each model has its battery pack located underneath its rear seat.

Fortunately, fuel economy doesn’t need to be part of your comparison shopping. The Insight and the Corolla share the same 52 mpg combined EPA fuel economy rating at their base prices. In our testing, both vehicles easily matched, and sometimes exceeded, their ratings.

One wrinkle is the Insight’s fully loaded Touring trim level, whose additional weight reduces combined fuel economy to 48 mpg. While getting less than 50 mpg may seem like a big deal, a 4-mpg difference at this level is negligible. The difference in annual fuel cost is only about $50, according to the EPA.

While the basic designs of the Corolla Hybrid and the Insight are the same, you will notice some comparative differences. The Insight offers a larger trunk and a more spacious interior. It also makes smarter use of its additional space with a deep and configurable center console. We also like the Insight’s cellphone cubby, which is big enough to hold plus-sized devices with larger cases.

The Corolla’s interior layout is adequate. It offers the pockets and cubbies you’d expect along with space for a phone under the dash, but the overall functionality isn’t as clever as in the Insight’s.

While neither car is particularly quick, the Corolla is less powerful and nearly 2 seconds slower to 60 mph in our testing. That’s a difference you’ll feel when you need a burst of speed to enter a highway or merge into traffic.

Because the transmission in each car lacks traditional gears, their engines tend to hang on to a fixed rpm speed while the car accelerates. The audible experience is a little bit like listening to a motorboat, with a fair amount of noise during acceleration. At least you don’t have to listen as long in the quicker Insight.

The Corolla has another annoyance when it comes to the braking. Hybrid vehicles can use their electric motors to slow down and recharge their batteries in a process called regenerative braking. In the Corolla, the handoff between regenerative and the traditional brakes makes the pedal’s responsiveness hard to predict, especially at low speeds. Smoothly coming to a stop in a parking lot can be difficult for the driver and annoying to passengers.

Each model starts at around $24,000 and comes with extensive active safety features, including adaptive cruise control, forward collision mitigation and lane keeping assist. At this base price, the Corolla Hybrid offers a few features the Honda doesn’t have, most notably support for Apple CarPlay smartphone integration.

However, Toyota offers the Corolla in just one trim level, the LE. In contrast, Honda offers the Insight in three trim levels. These additional trims provide shoppers the option to get more comfort and technology features.

Compared to the Corolla Hybrid LE, an equivalently outfitted Insight EX costs $1,210 more. Yet it also comes with a few more features that aren’t available in the Corolla such as Android Auto smartphone integration and blind-spot monitoring. Go for the top Insight Touring and you’ll enjoy even more exclusive features such as a sunroof, leather upholstery, heated seats and a premium sound system.

EDMUNDS SAYS: The Corolla is a compelling hybrid thanks to its array of standard features at an affordable price. While an equivalently optioned Insight costs slightly more, it delivers a more functional interior, a stronger array of features, and a superior overall driving experience, making it worth the difference.