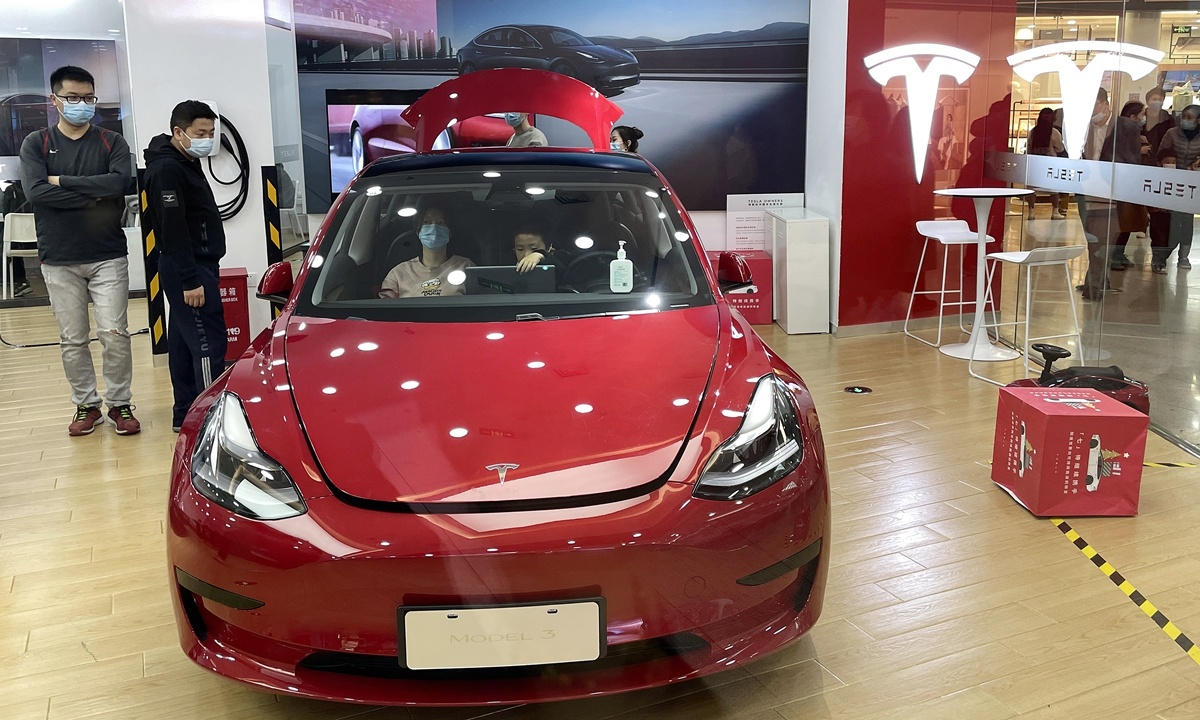 People sit inside a Tesla car displayed at a store in Beijing. (Photos: VCG)

Tesla's sales in the Chinese mainland dropped by more than 27 percent in April from March as the world's leading electric vehicle (EV) maker was embroiled in a product quality spat in the market, after a protest by several Tesla car users at the site of a recent Shanghai auto show.

The US-based electric carmaker sold 25,845 EVs in April, down 27.15 percent from March's 35,478 vehicles, according to data released by the China Passenger Car Association (CPCA) on Tuesday. The April sales figure was still higher than the sales of 15,484 cars in January and 18,318 in February.

In total, Tesla sold 95,125 cars in China over the first four months this year, the data showed.

Tesla's sales fell after an unexpected live protest at this year's Shanghai auto show drew rising scrutiny from Chinese consumers of Tesla cars' quality. At the 2021 Auto Shanghai, a Tesla user climbed onto the top of one of Tesla's display vehicles, protesting against brake failure problems. The incident quickly went viral on China's Sino Weibo and aroused nationwide discussion. Tesla later agreed to share vehicle data with the consumers under regulators' orders.

Experts said that the live expo protest and ensuing controversies should not have been the fundamental reason for Tesla's sales decline in April, though it might have produced an impact.

"It's possible that some people might have asked to cancel their orders after the car expo protest, which would have hurt Tesla's car sales in April, but it's not likely there were many such cases," Zhang Xiang, a research fellow at the Research Center of Automobile Industry Innovation under the North China University of Technology, told the Global Times.

According to Zhang, the influence of the Shanghai expo incident has largely faded, so its impact on Tesla sales is limited.

He said that Tesla's inventories should have reached an ebb in April, which caused its deliveries to shrink. Tesla reportedly halted production for two weeks in April, leading to fluctuations in sales, media reports said.

However, the company still managed to set a record for single-month EV exports by shipping 14,174 cars made in its Shanghai Gigafactory to other markets in April, the CPCA data showed.