Dubai-based Emirates airline on Thursday posted its first loss in more than three decades, saying it had been badly hit by the coronavirus lockdown that brought air transport to "a literal standstill". 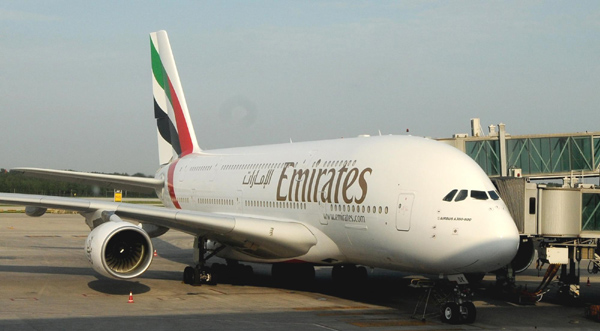 The Middle East's largest carrier said it suffered a $3.4 billion loss in the six months to September, forcing it to slash its workforce.

"In this unprecedented situation for the aviation and travel industry, the Emirates Group recorded a half-year loss for the first time in over 30 years," the airline's chairman and chief executive, Sheikh Ahmed bin Saeed Al Maktoum said in a statement.

"No one can predict the future, but we expect a steep recovery in travel demand once a Covid-19 vaccine is available, and we are readying ourselves to serve that rebound."

The airline, which had to temporarily suspend operations earlier this year before building back its vast network, saw revenue fall 75 percent to $3.2 billion.

Over the half-year to September, it carried just 1.5 million passengers, down 95 percent from the same period last year.

The carrier said that its bottom line found some support with a "strong cargo business" as it repurposed its fleet to accommodate the need for supplies around the globe, including medical equipment.

"As passenger traffic disappeared, Emirates and (air services arm) dnata have been able to rapidly pivot to serve cargo demand and other pockets of opportunity," Sheikh Ahmed said.

"This has helped us recover our revenues from zero to 26 percent of our position same time last year."

The airline has announced several rounds of layoffs, without disclosing numbers.

In Thursday's statement, it said that the Emirates Group's employee base -- which includes ground-handling firm Dnata -- "is substantially reduced by 24 percent to an overall count of 81,334 as at 30 September 2020.

"This is in line with the company’s expected capacity and business activities in the foreseeable future and general industry outlook," it said.

Before the virus hit, Emirates airline alone employed some 60,000 staff, including 4,300 pilots and nearly 22,000 cabin crew, according to its annual report.

Tourism has long been an economic mainstay of Dubai, which welcomed more than 16 million visitors last year. Before the pandemic, the aim was to reach 20 million this year.

Previously, Emirates served a global network spanning over 158 destinations in 84 countries. Currently, it flies to 99 destinations.