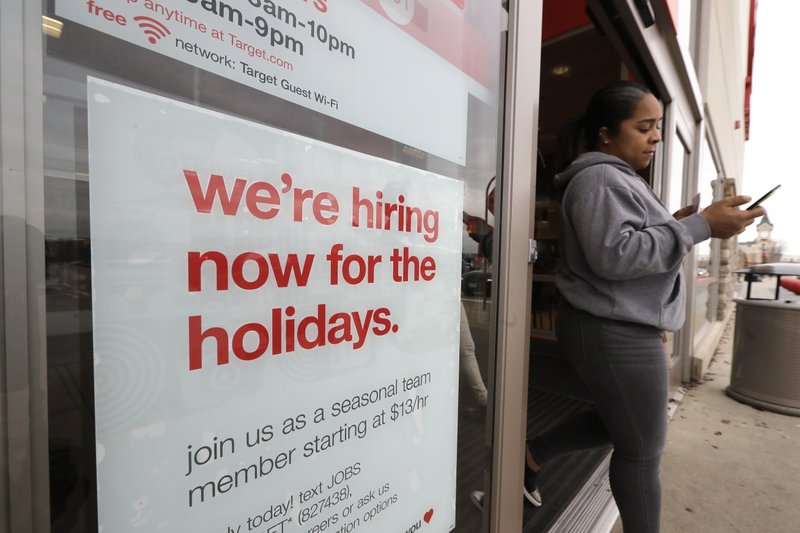 In this Nov. 27, 2019 photo a passer-by walks past a hiring for the holidays sign near an entrance to a Target store location, in Westwood, Mass. (Photo: AP)

The number of available jobs jumped in October after hitting an 18-month low the previous month, a sign the job market remains strong.

The Labor Department said Tuesday that the number of available positions rose 3.3% to nearly 7.3 million. That suggests that businesses remain confident enough in the economic outlook to create more jobs.

The figures provide the latest evidence that employers have largely shrugged off the uncertainties surrounding the US-China trade war and slowing global growth. While the number of open jobs has declined from a record high of 7.6 million a year ago, they are still at a historically high level. For roughly a year and a half there have been more job postings than unemployed people.

The figures follow a healthy jobs report earlier this month that showed a surprisingly robust gain of 266,000 jobs while the unemployment rate fell to a 50-year low of 3.5%.

“The numbers should calm worries that employer demand for workers is drying up,” said Julia Pollak, chief economist at ZipRecruiter. “Rather than falling substantially, job openings now appear to have remained fairly stable for over a year.”

The number of Americans who quit their jobs also rose, though that figure remains below the peak reached in July. Quits are a good sign for the economy because most workers quit jobs for new, usually higher-paying, positions. Data compiled by the Atlanta Federal Reserve Bank show that workers who switch jobs are seeing larger wage gains than those who stay. More quits can also push companies to pay more to retain their staffs.

Job openings jumped 125,000 in the retail sector, likely reflecting strong demand for temporary workers for the holiday season. The government seeks to seasonally adjust the data for those fluctuations but isn’t always able to do so perfectly. October’s gain was the largest increase in retail job openings since April 2018.