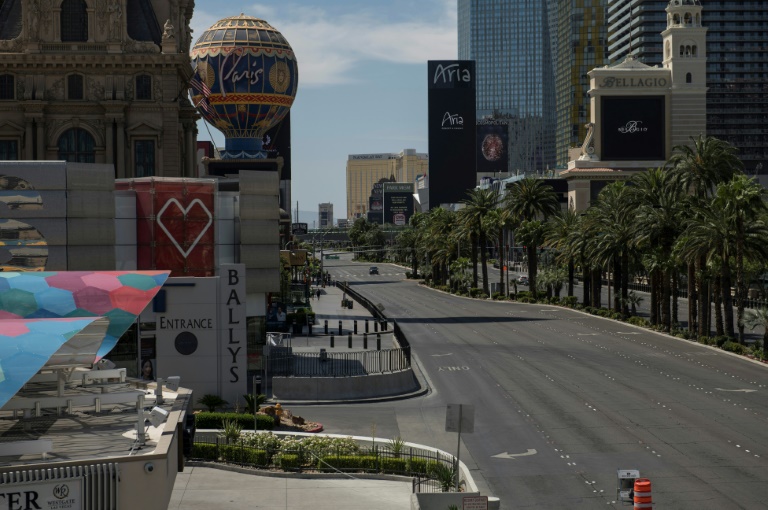 A car drives down the Las Vegas strip, which the pandemic has deprived of its drunken revelers and packed poker tables. (Photo: AFP)

The marble statues at Caesars Palace are fenced off, the Venetian hotel's gondolas sit empty, and the New York-New York casino rollercoaster has ground to a halt.

Even the Bellagio's famous dancing fountains are "completely shut" due to the coronavirus pandemic, says a surly security guard, before shooing an AFP correspondent away.

In the absence of bustling crowds of drunken revelers, packed poker tables and overzealous club promoters, the slogan "what happens in Vegas stays in Vegas" has never felt more redundant.

Now, the sidewalks lie empty under the scorching sun, except for idle security guards, and a handful of vagrants and bewildered-looking tourists.

And local residents, from cycling families to skateboarding teens, are flocking to the vacant sidewalks in search of respite from weeks of stay-at-home orders.

"Being that I live in Las Vegas, I never come to the Strip. Ever. There's no need to," said automotive business owner Mike Evans, 47.

"Being around drunk people and belligerent people is not relaxation," he added, pausing from his bike ride to take a selfie. Now even the outdoor escalators that usually transport pedestrians across traffic lanes stand still.

Angela Arnold, taking advantage of the lull to cycle to the "Welcome to Fabulous Las Vegas" sign with two fellow residents, added: "We're not going to hear horns blowing and people passing out vulgar advertising."

Similarly, Luis Rosales, a 30-year-old server at the Venetian, has taken to rollerblading and jogging along the Strip.

"I thought never in my life like I would see Las Vegas shut down," he said. "There's no commotion, there's no hustle and bustle... it's like a ghost town."

Beneath the odd sense of calm, the financial pain of the shutdown is clear.

Billboards are plastered with adverts for nightclub launches that never happened -- alongside uplifting messages to "Stay Strong."

One budget hotel that has remained open on the Strip reports a few stir-crazy tourists visiting from neighboring California -- and even as far away as Wisconsin.

But more customers are long-term guests who have lost their Las Vegas homes during the lockdown -- despite laws intended to prohibit evictions.

"We miss the noise... the great vibes, and people, and feeding off the happiness of other people," said Samantha, a former well-tipped cocktail waitress now serving chicken wings for minimum wage, who did not want to give her last name.

She spoke with AFP while out for a walk with her mother Louisa, left unemployed as a poker dealer due to coronavirus.

There are nascent signs of the city starting to reawaken. From Saturday, restaurants will be allowed to reopen at half capacity.

But the tourist-magnet casinos and nightclubs -- along with the state's strip joints and legal brothels -- will remain shut, for now.

"Since money is the root of all evil and Vegas is considered the capital of money and greed, this is the last place I thought I'd see shut down," said Evans. "But they still did."