The phenomenon of 'empty nest youth' in China is stimulating a niche of 'loneliness economy' in China, according to a report in South China Morning Post. 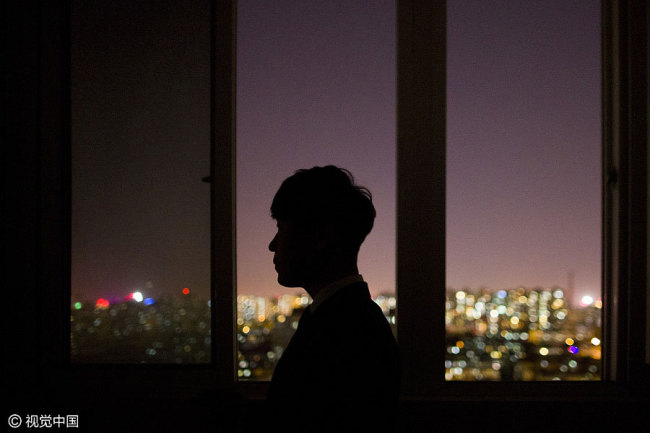 A man looks out over Beijing's brightly lit downtown district from the window of his rented room, on April 25, 2017. (Photo: VCG)

Empty nest youth are individuals who are usually single, rent rather than own their home, and often live far from their hometown in China's big cities.

A report was released in January on this social group. Called the Economy of Loneliness, it was prepared by the company behind dating app Momo and home-sharing app Xiaozhu.

Kelly Hui, 26-year-old photographer, shares a 60 square meter flat in Shenzhen with a flatmate, but they seldom talk. Her best friend is a virtual frog in the Japanese smartphone game Tabikaeru: Travel Frog.

According to developer Hit Point, Chinese players have accounted for 95 percent of downloads of the game since it was launched in November.

"The lonely frog is like me, independent and doing what I love doing, alone," said Hui.

Kelly Hui represents the emerging group of Chinese consumers who are well-educated, young, and willing to spend money, but spend money on solitary pursuits.

The report says that the pressure of surviving and thriving in big cities contributes to their sense of loneliness, and that consumption becomes an emotional outlet.

Businesses are taking advantage of the new phenomenon. Mini karaoke booths in shopping malls, cinemas, and airports have mushroomed across Chinese cities over the last three years. Xiabu Xiabu, a restaurant chain that offers "one person, one pot" hotpot outperformed many traditional restaurant operators in the past year.

Mark Greeven, associate professor of innovation and entrepreneurship at Zhejiang University, said that we may be seeing a phenomenon, facilitated by technology, where young Chinese people, especially millennials, are looking for individual experiences and personalized services more than the previous generation, according to South China Morning Post.