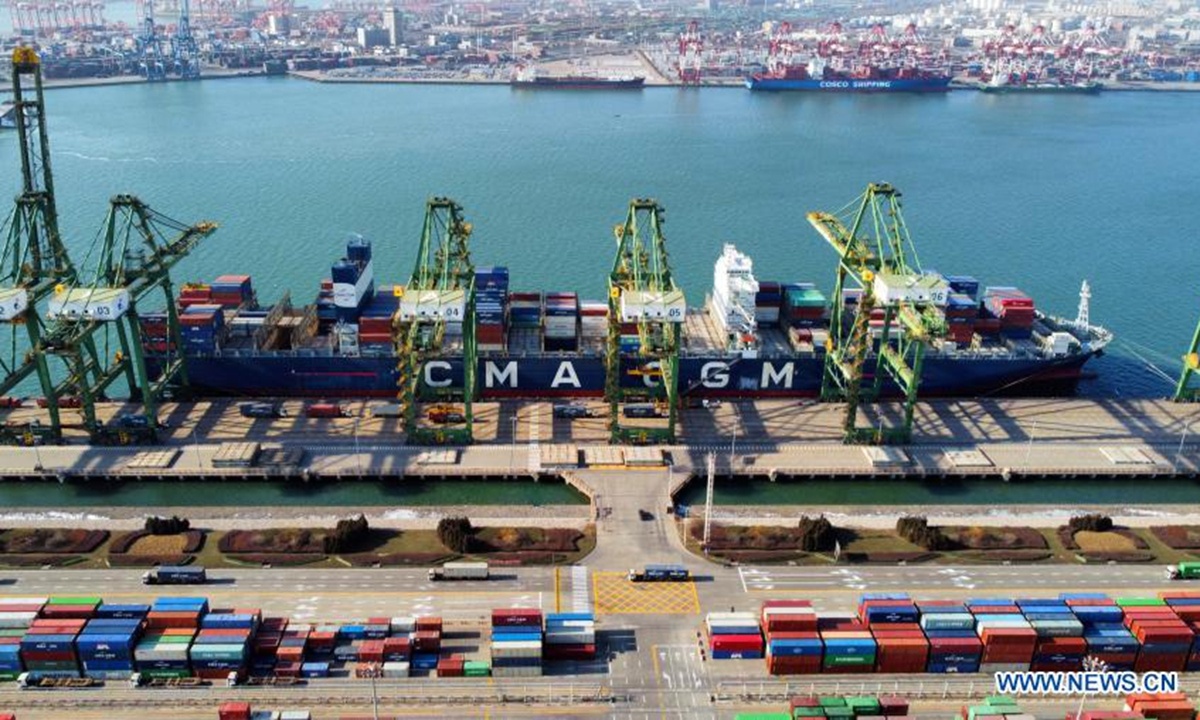 A container ship is seen at the Pacific international container terminal at the Tianjin Port of north China's Tianjin Municipality, Jan. 11, 2021. (Photo: Xinhua)

Most entrepreneurs and high-level executives from China, Japan and South Korea are optimistic about China's economic growth this year, according to a survey by the Global Times Research Center, Maeil Business Newspaper and Nikkei.

The survey was taken from December 3-15, 2020. The subjects were limited to entrepreneurs or corporate executives who have decision-making power in companies in China, Japan and South Korea. There were 100 responses from China, 106 from South Korea and 83 from Japan.

According to the World Bank's latest forecasts, China's GDP growth is estimated at 7.9 percent in 2021. The global economy will record a 4-percent expansion this year after a 4.3-percent contraction in 2020, the Washington-based institution said.

A vast majority of Chinese respondents (96.0 percent) believed that China has demonstrated an outstanding performance in rolling out economic responses and support policies against the impact of the virus.

Among South Korean respondents, China's anti-epidemic measures and support policies were affirmed, with 40.4 percent giving positive comments, while only 27.4 percent and 3.8 percent did so for their own country and Japan, respectively.

For Japanese respondents, positive comments for China's virus-fighting measures took up 64.4 percent, while the figure for their own country and South Korea stood at 26.4 percent and 13.7 percent.

"There are quite high proportions among Japanese and South Korean business leaders who highly recognize China's efforts and measures to control COVID-19 while bringing economic operation back to normal," Lü Chao, a fellow at the Liaoning Academy of Social Sciences, told the Global Times on Monday.

Although the epidemic is still severe in Japan and South Korea, both have performed better than some Western countries, Lü said, adding that there will be robust economic rebounds in the two countries if the COVID-19 impact eases later this year.

In the wake of the mega deal, a higher-level trilateral free trade agreement (FTA) among China, Japan and South Korea is likely to be reached sooner than expected.

China will promote the early implementation of the RCEP and accelerate talks for a China-Japan-South Korea FTA, Minister of Commerce Wang Wentao said last week, when introducing the ministry's 2021 work focus.

Lü said that the cooperation momentum of the three Northeast Asia countries is unstoppable. "The Asia-Pacific region will play a leading role in driving the world's economic recovery in the post-COVID-19 period, and Northeast Asia will serve as the key driver," he noted.