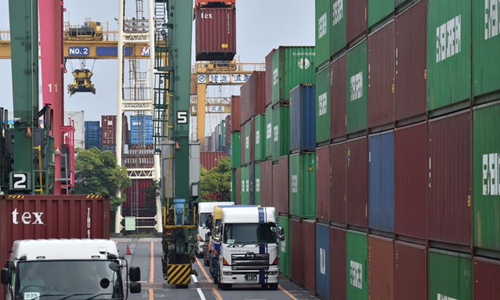 The Impact of the novel coronavirus pneumonia, or COVID-19, is still spreading and inhibiting trade between China and its neighboring countries including Japan and South Korea.

Orders are delayed at ports, quarantine processes are getting strengthened, and production is lagging as factories have not yet restored normal operations.

With China's exports to the two East Asian countries ranging from mechanical, electrical products to daily necessities including vegetables, grain and mineral water, the impact might be felt by industries and local people soon, insiders said, while noting that the virus will not have a long-term impact on trade relations.

Among all the products, labor-intensive ones are most affected due to the delayed resumption of factories, while products with higher automation rates or larger inventories are less affected, said the spokesperson, who added specific data is not available yet, since "the shipping situation is still being affected by the epidemic."

An insider told the Global Times that many ferries have been cancelled due the virus.

"Orders are delayed as we have not resumed production yet, and we asked workers to stay at home for at least 14 days - which means a total production recovery will not be achieved before March," the manager said, asking to remain anonymous.

"If the virus cannot be contained in April, the high season of our businesses, there might be a shortage of or price hike of relevant products in Japan and South Korea," he added.

Industry insiders told the Global Times that ports' operations across the country, including ones in Shanghai and Ningbo in East China's Zhejiang Province are also affected by the virus.

Goods are stuck at the ports. The goods from factories cannot be sent out, and those from outside cannot come in, said the insiders, adding that industry players are figuring out ways of recalling workers as soon as possible.

Experts noted that Japan and South Korea have a high degree of trade dependence on China, which is their top trade partner for many years.

In January, Japan's exports to China dropped 6.4 percent due to declines in chemical products and auto parts, while its imports were down 5.7 percent, led by items including mobile phones and aluminum.

South Korea's exports to China fell 10.5 percent year-on-year in January, just a month after recording the first growth in 14 months in December.

"Due to the sharp decline in Chinese tourists to Japan and South Korea in the short term, the catering, retail and transportation industries in the two countries are also facing challenges," Li Tianguo, associate professor at the National Institute of International strategy, Chinese Academy of Social Sciences, told the Global Times on Wednesday.

A report by the International Civil Aviation Organization showed that in the first quarter of 2020, the tourism industry in Japan may lose $1.3 billion, citing declining Chinese tourists.

Li called for cooperation between China and neighboring countries to launch emergency measures and discuss countermeasures to tide over difficulties, and delay some investment and trade when necessary.

"The impact will be just temporary and will not affect long-term trade relations," Li added.