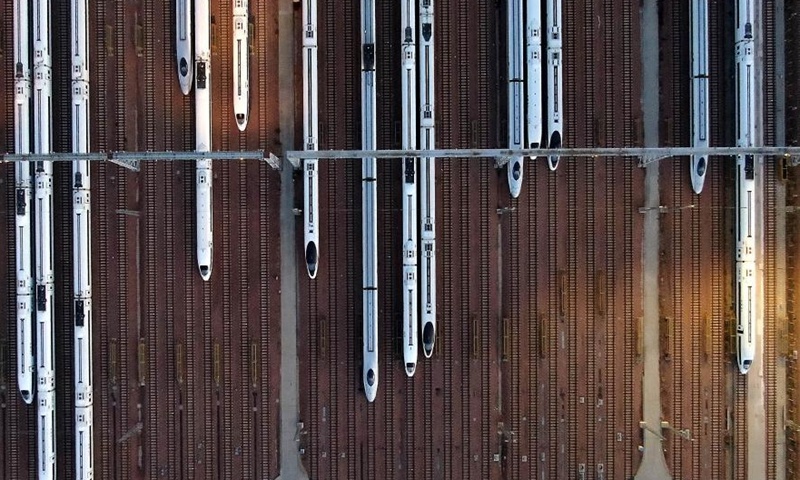 Dampened by the nation's policy of encouraging residents to stay in their cities of work, air and rail travel for the Chinese Spring Festival have fallen sharply. The situation sends a warning sign for the profits of those carriers amid stringent epidemic control measures.

Chinese railways, which have been struggling to shake off the impact of the epidemic, saw a decline in passenger traffic of more than 70 percent in the first four days of the 40-day Spring Festival travel rush, which started on Thursday.

On the first three days, the railways carried 3.08 million, 2.83 million and 2.96 million passengers, and those numbers were about one-quarter of the year-earlier levels.

The downtrend has not been reversed, with passengers on the fourth day (Sunday) hitting 2.9 million, a decrease of 75 percent.

The reason for the low numbers is clear: sporadic COVID-19 cases in China have triggered a new round of protective measures, as governments at both the national and local levels encouraging residents to stay in place for the Chinese New Year holidays.

Presales of railway tickets for the upcoming Spring Festival travel rush have decreased by nearly 60 percent compared with the same period last year, and the number of trips is estimated to drop to 296 million this festival, said Li Wenxin, deputy general manager of the China State Railway Group Co, on January 15.

"Passenger flows by train are at a low ebb historically due to the epidemic prevention measures," Zhao Jian, a professor at Beijing Jiaotong University, told the Global Times on Monday.

He said the demand and willingness of passengers to travel is significantly lower, resulting in a decline of the company's operating income.

China State Railway Group said earlier that railway operating results were better than expected in 2020 amid the epidemic, as the group realized revenue of 1.134 trillion yuan ($ 175.43 billion).

Shi Qixin, a professor from the Institute of Transportation Engineering at Tsinghua University, told the Global Times on Monday that the sluggish passenger flows of the Spring Festival will persist for three to four years if the global epidemic remains severe.

Shi predicted that passenger trains will see further declines, which will even last until the Spring Festival next year, as the epidemic prevention work enters a new normal amid the global outbreak.

To curb the losses, the train ticket purchasing platform 12306 is giving big discounts, and some fares can be up to 80 percent lower than ordinary days, a very rare move amid the travel rush.

Meanwhile, experts predicted that passenger flows, which have dropped by 70 percent, may pick up slowly when businesses resume operating at full capacity after the holiday, experts said.

The Beijing-Shanghai high-speed railway, the most popular railway line in China, said that 2020 net profits stood at 3.07-3.39 billion yuan, which would be a year-on-year decline of 69.27-76.56 percent. The figures were released on Friday.

The Chinese New Year period, which is supposed to be the peak season for airlines, may dampen the airlines' hopes of turning a profit amid low ebb.

The Civil Aviation Administration of China predicted that the number of trips in the 40-day travel peak will be around 39 million, almost the same as last year - but in 2019, the number was about 73 million.

"The passenger volume of this year's Spring Festival travel rush will be reduced by about 14 percent compared with 2020, and a decrease of 54 percent from 2019," Lin Huaiyin, an analyst from CADAS, told the Global Times on Monday.

It is expected that the passenger volume of civil aviation will hover in the bottom range before the Spring Festival. As the Spring Festival approaches, it may rebound slightly, but it will be difficult to exceed the highest level in January 2021, he added.

Insiders said turning to cargo could be a help.

In the future, there should be some mixed passenger and cargo routes to curb losses, Zhao from Beijing Jiaotong University suggested.

"Now railway resources cannot be fully utilized. They can be made up by means of cargo, just like what happened in the aviation industry," Zhao said.