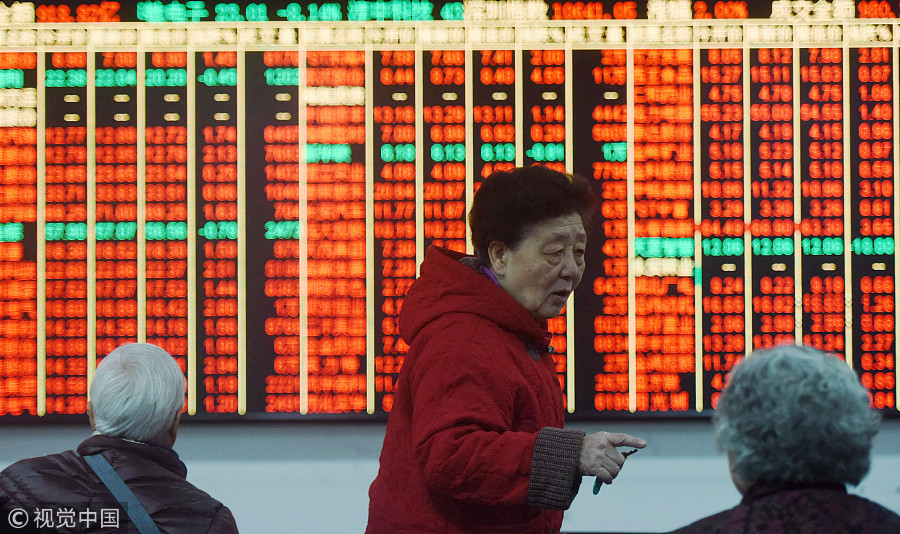 An investor walks past an electronic board showing stock information at a brokerage house in Hangzhou, Feb 22, 2018. (Photo: VCG)

Equities remained steady on the Shanghai and Shenzhen bourses on Monday, despite major losses on most of the Western stock exchanges amid rising geopolitical uncertainties in the Middle Eastern region.

Although the benchmark Shanghai Composite Index fell marginally by 0.01 percent on Monday, it climbed to 3100 points in early trading. With this, the Shanghai index has gained 20 percent since the beginning of 2019. The Shenzhen Component Index gained 0.39 percent to close at 10,698.27 points.

Shares of precious metals companies listed on the Shanghai and Shenzhen bourses were the main gainers, according to Shanghai-based market tracker Wind Info. The companies logged an intraday increase of 7.61 percent on Monday, while State-owned oil companies rose by 4.17 percent.

Tensions in the Middle East region escalated after Iranian military commander Qassem Soleimani was killed in a drone attack on Friday, followed by US President Donald Trump's warning on Saturday on possible reprisals from Iran. On Sunday, Iran said that it would no longer abide by the limits of the 2015 nuclear deal.

The Dow Jones Industrial Average dropped 0.08 percent last week while the Nasdaq Composite fell 0.16 percent. The S&P 500 shed 0.17 percent over the past week.

Prices of precious metals jumped instantly after the reports of escalating tensions. A major contract for the Gold Comex in Asia saw its price exceed $1,590.9 per ounce on Monday morning, a record since March 2013. West Texas Intermediate crude prices rose by 2.2 percent to $63.05 per barrel, while Brent crude exceeded $70 per barrel in early trading on Monday, the first spike since May 2019.

Prices of the main crude oil contract at the Shanghai International Energy Exchange soared by the daily surge limit of 7 percent in morning trading, the highest since May 2019. China National Petroleum Corp share prices rose by 4.71 percent to 6.23 yuan (89 cents) per share on Monday, while China Petrochemical Corp went up by 1.71 percent to 5.36 yuan per share.

The spurt in oil prices is negative to the global economy, even as geopolitical uncertainties are hammering stock market performances across the world, said Yang Delong, chief economist of Shenzhen-based First Seafront Fund. However, the tensions in the Middle East will only have a limited impact on the A-share market as Chinese bourses are not that closely linked to the overseas markets, he said.

More importantly, the A-share market has witnessed a number of morale-boosting policies since the beginning of this year, Yang said.

On Jan 1, the People's Bank of China, the central bank, decided to cut the reserve requirement ratio by 0.5 percentage point to inject 800 billion yuan into the financial sector. The China Banking and Insurance Regulatory Commission released a guideline on Saturday which encourages Chinese individuals to make long-term investments.

"An uptrend can be expected this week and the impetus is very likely to last throughout the spring. For sure there will be ups and downs in the next few months. But the fluctuation will be quite moderate," he said.