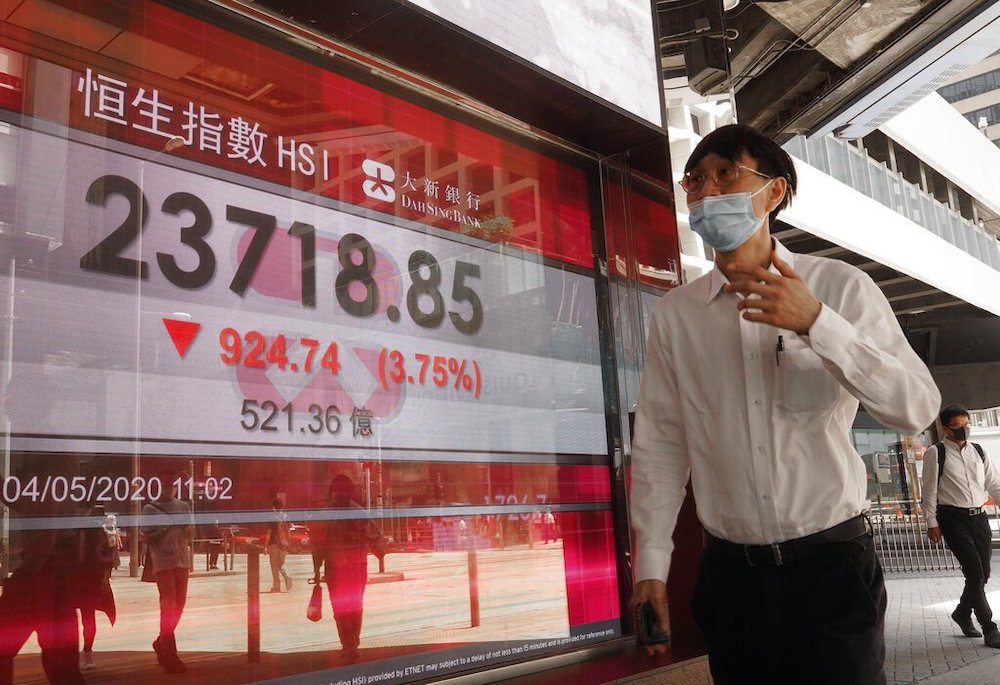 Stock markets suffered steep losses Monday, tracking a selloff in New York after Donald Trump sparked fears of a renewed trade war with China over its role in the coronavirus pandemic.

Claims by the U.S. president and Secretary of State Mike Pompeo that the disease started in a lab in Wuhan, and that those responsible would be held to account, overshadowed a further slowing of infections and deaths from COVID-19.

The losses across Asia came as investors returned from an extended weekend break and after all three main indexes on Wall Street tanked between 2.6 and 3.2 percent, having enjoyed their best month in decades in April.

Trump suggested he could lump new tariffs on China over its handling of the virus outbreak, claiming he had seen evidence linking a Chinese lab to the contagion.

The warning fanned worries of a return to the trade standoff between the world's top two economies that battered global markets last year until a partial agreement was reached in December.

It also comes as Trump faces a tough fight to be re-elected in November with the economy tanking and millions of Americans losing their jobs because of the virus crisis.

"President Trump is back beating the trade war drums... and increasing the odds of a significant volatility risk event as all roads lead back to trade and tariff," said AxiCorp's Stephen Innes.

He added that "while the market is already factoring in a less globalized world during the initial phase of the post-pandemic recovery as economies internalize, rekindling a dormant U.S.-China trade war will likely make any economic improvement exponentially more difficult. And ripping up the trade agreement will trigger a global equity market rout."

Dollar on the rise

Hong Kong fell 4.2 percent, while Mumbai was off more than five percent. Seoul, Taipei, Singapore, Manila and Jakarta were all down more than two percent, but Sydney added more than one percent and Wellington was also in positive territory as Australia and New Zealand begin easing measures to contain COVID-19.

In early trade, London slipped 0.2 percent, while there were big losses in Paris and Frankfurt.

Tokyo and Shanghai were closed for holidays.

Analysts warned that after a strong April – fueled by optimism the worst of the disease has passed – equities could suffer a tumultuous May as corporate earnings and other indicators reveal the extent of the damage inflicted.

"For several weeks now the prospect of significant monetary, as well as fiscal stimulus, has prompted a decent rebound in equity markets, largely on the basis that any policy missteps on the part of politicians might be kept to a minimum," said CMC Markets analyst Michael Hewson.

"This seems much less likely now, given recent comments, while the sharp deterioration seen in recent March economic data prompted a sharp reassessment of the likelihood of a V-shaped recovery."

The downbeat mood sent the dollar rallying against higher-yielding, riskier currencies including the Australian dollar, South Korea's won and the Mexican peso.

Oil prices dropped after surging last week as top producers began to ease up on the pumps as part of a deal agreed last month to slash output by 10 million barrels a day.