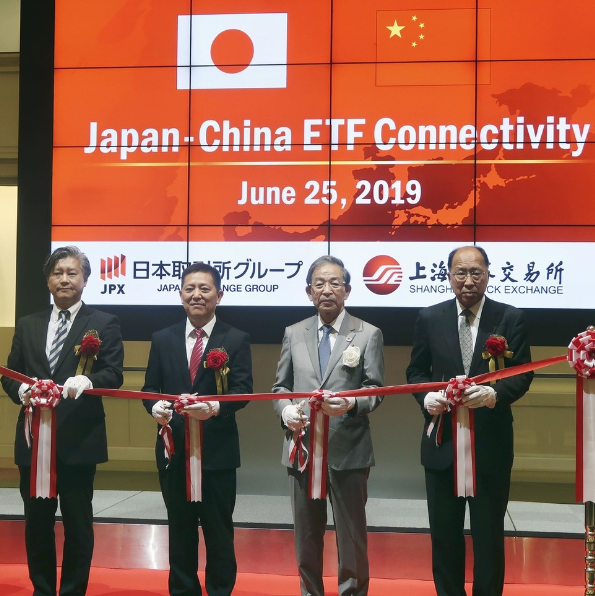 The Chinese capital market accelerated its opening-up with the official launch of the China-Japan ETF Connectivity scheme on Tuesday, allowing investors in both countries to invest in each other's exchange traded funds market.

It took less than 10 months for the connectivity scheme to start trading. The SSE signed a memorandum of understanding with the Japan Securities Group in October to study the feasibility and make joint efforts to realize China-Japan ETF Connectivity.

In late April, the two parties signed a further agreement at the first China-Japan capital market forum to allow cross-listing of ETF products on the bourses of both countries.

With that, qualified institutional investors in China and Japan were allowed to set up cross-border funds to invest in ETF products in either country.

Fang Xinghai, vice-chairman of China Securities Regulatory Commission, said at the launch ceremony that China-Japan ETF Connectivity, together with the Shanghai-London Stock Connect launched on June 17 and FTSE Russell's inclusion of the A shares implemented on June 21, indicated that China has accelerated its capital market opening-up.

He also stressed that the China-Japan ETF Connectivity, which is mutually beneficial cooperation between the world's second and third-largest economies, is of great importance at a time of rising trade protectionism in the world.

Miyahara Koichiro, chief executive officer of the Tokyo Stock Exchange, said that the connectivity scheme will activate cross-border trading between China and Japan and deepen cooperation between the capital markets of the two countries.

SSE General Manager Jiang Feng said that the Shanghai bourse will continue its cooperation with Japan Exchange Group in addition to the ETF connectivity program. The SSE will also seek opportunities to team up with stock exchanges in other markets to facilitate the two-way opening-up of the Chinese capital market.

By the end of 2018, only 13 Chinese QDII funds had Japanese assets included, with a total market value of around 77 million yuan ($11 million), according to market tracker Wind Info. This accounted for 9.93 percent of the net value of all funds.

Liu Junwei, senior analyst at Everbright Securities, said that the ETFs in Japan will help to diversify risks as there were limited products currently targeting the Japanese market. With the moderate pickup of Japan's economy and its central bank's bulk investment, product performance can be predicted with certain stability.