EU agrees on virus economy aid but split over way ahead 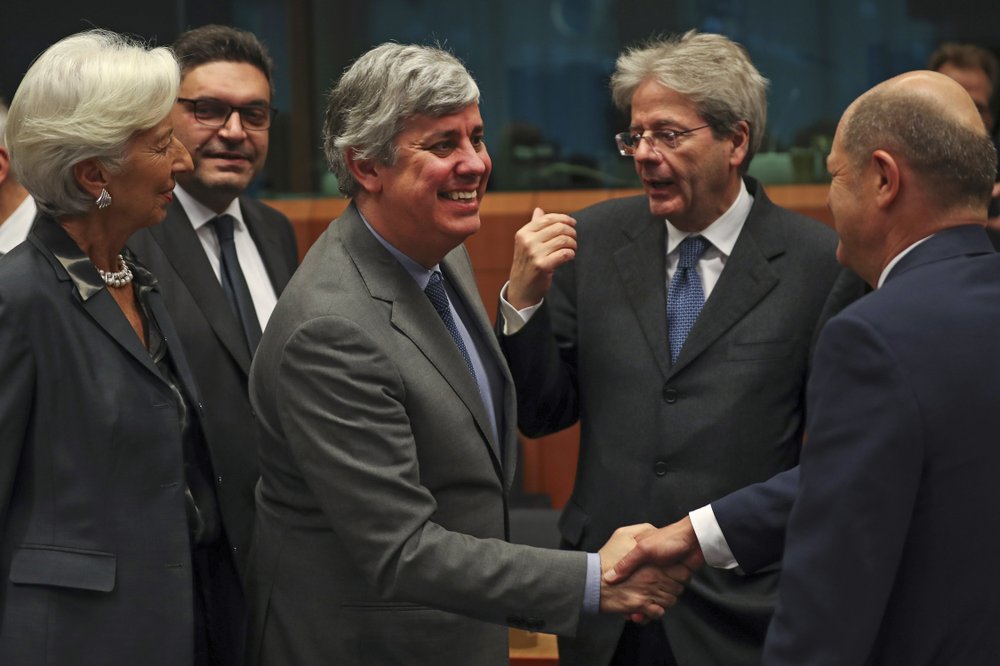 Faced with a mounting coronavirus death toll and the prospect of a deep recession, European finance ministers have backed a major half-trillion-euro (about $550 billion) rescue package.

But the agreement does little to paper over divisions about how best to tackle the impact of the coronavirus and pave the way for a return to normal life.

Hard-hit countries like Italy and Spain have demanded funds for weeks as they’ve battled to save lives and keep their economies afloat. As of Friday, more than 64,000 Europeans had been killed by the disease — two thirds of the global toll — the European Centre for Disease Prevention and Control says.

After a chaotic response when the virus first broke out in northern Italy, the European Union has taken unprecedented measures, and the new support program makes an extra 240 billion euros ($263 billion) available in cheap loans to pay health costs.

Yet Europe’s leaders, who will hold talks again via video-conference on April 23 to take stock of the fight, no longer even try to hide the fact that the lack of solidarity exposed by the virus poses an existential threat.

Usually measured in her remarks, German Chancellor Angela Merkel said this week that the EU is “facing its greatest test since its founding,” when the Treaty of Rome — the text on which the world’s biggest trading bloc is built — was signed in 1957.

Spanish Prime Minister Pedro Sanchez said that the EU is fighting “a war against an invisible enemy that is putting the future of the European project to the test.”

“Either we rise to this challenge or we will fail as a union. We have reached a critical juncture at which even the most fervently pro-European countries and governments, as is Spain’s case, need real proof of commitment. We need unwavering solidarity,” he said.

For now, the rescue package shows that hundreds of billions in funding can be marshaled under the collective might of the euro single currency area, on top of the already heavy coronavirus spending undertaken by national governments.

But Thursday’s agreement could not hide deep differences between countries like Austria, Germany and the Netherlands in northern Europe and those worst-hit further south like Italy and Spain, but also France, over the eventual need for “coronabonds” or “eurobonds” to share debt among nations.

“We can be satisfied with the result, really satisfied,” Dutch Finance Minister Wopke Hoekstra told Dutch reporters after the meeting. But he added: “we are, and will remain, opposed to eurobonds.”

Spain’s economy minister, Nadia Calviño, also hailed the agreement, but she told Cadena SER radio that Madrid will “continue working to establish in the mid-term a mechanism to share the European debt, the so-called coronabonds.”

For most people, coronavirus symptoms clear up in two to three weeks. But for some, especially older adults and people with existing health problems, it can cause more severe illness, including pneumonia, and death.

EU leaders tasked the European Commission with coordinating an “exit strategy,” and as Austria and the Czech Republic moved it tried to rush out its action plan this week. But others warned that the Easter vacation, when people should stay inside, isn’t the time to talk about easing quarantine.

Spokesman Eric Mamer said it’s “quite a tricky issue because member states find themselves in different stages of the fight against the pandemic” but he suggested that the commission could go public with its plan if more countries move alone.

In a deeply interconnected Europe, Brussels believes that any exit should take into account the virus’s spread throughout the EU, the capacity of health systems to cope with a possible second wave, the impact of any new border closures and the need to for countries to keep their partners informed.

The commission is also urging countries to overcome tendencies of a more miserly nature, by lifting national export bans and restrictions that deprive pharmacies in neighboring countries of essential medicines and to avoid “national stockpiling” equipment, which can fuel panic buying.

“The consciousness must grow very quickly that we are facing an unprecedented challenge,” commission Executive Vice-President Frans Timmermans told the Dutch daily Volkskrant. “The need for solidarity must reach everyone, and solidarity goes far beyond helping to alleviate the immediate medical need.”