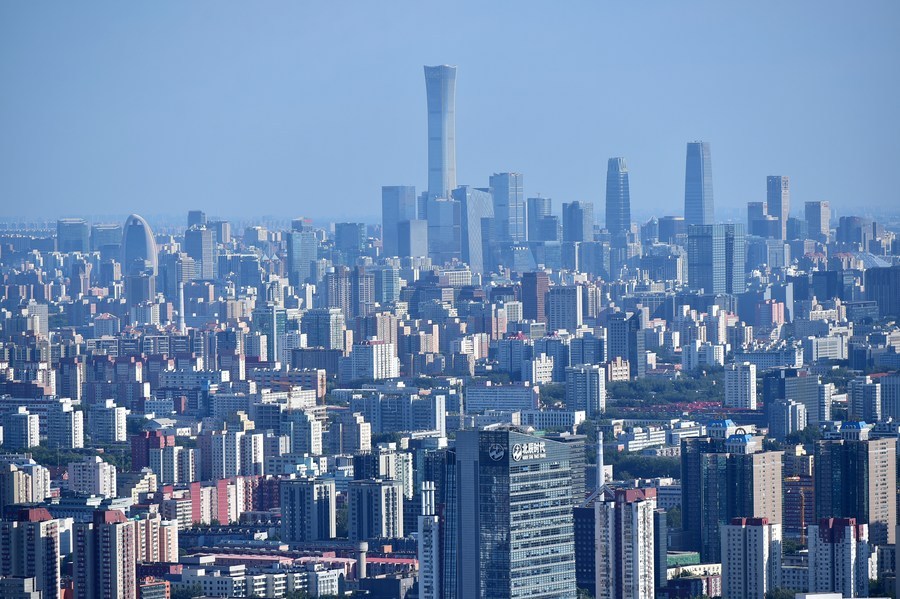 Photo taken on Sept 9, 2020 shows the view of the skyscrapers of the Central Business District (CBD) in Beijing, capital of China. (Photo: Xinhua)

China's business environment has become more accessible for European companies in a number of areas, the European Union Chamber of Commerce in China said.

Many firms, the chamber's leaders said, are reinforcing their position in joint ventures and onshore supply chains.

Besides, European companies are increasing spending in China to enlarge their local market share, they said.

Charlotte Roule, the chamber's board member, said China is rolling out the red carpet for companies with technologies that the country needs for its overall industrial upgrade and to meet its decarbonization targets.

In this context, she mentioned machinery, chemicals, semiconductors, green energy and environmental services.

The chamber found companies in segments like consumer goods, automotive, services like consulting, education and healthcare, and financial services like insurance and banking, that onshored in China are seen with fast growth.

China-EU trade surged 26.7 percent year-on-years to 2.52 trillion yuan ($390.35 billion) in the first half of this year, while foreign direct investment from European companies in China soared 50.7 percent year-on-year, data from the General Administration of Customs and the Ministry of Commerce showed.

Roule said European companies are taking steps to secure their operations in China and mitigate exposure to geopolitical trends to have a better chance of navigating a potentially fraught near- to medium-term future.

"This is unsurprising as companies cannot be globally competitive without a strong presence in China," she said, adding if the United States and China proceed down the path of trade conflicts and technological divergence, then it is imperative that exposure be minimized. For many European companies in China, that means onshoring as much as possible.

"The European business community in China hopes that each side will now consider how they might proceed with the commitments made under the China-EU Comprehensive Agreement on Investment (CAI), regardless of whether or not the deal will be ratified," said Roule.

Her view was shared by Liu Chang, chair of the chamber's government affairs forum. Liu said that in the context of market demand, supply chain stability, global companies' existing footprint, current growth in China or future development strategy, China-US or China-EU decoupling is not realistic. Any such course will likely harm either side.

"To meet the common challenges brought by COVID-19 and other factors, we all expect that China and the EU could strengthen their cooperation," Liu said, noting that a large number of the chamber's member companies turned a profit in 2020, demonstrating that, even in challenging times, European companies certainly can adapt and be successful.

In the past decades, multinational corporations have fully integrated into the development pattern of the Chinese economy and its constituent industries, and became an integral part of globalization, said Liu, who is also the vice-president for China unit at Knorr-Brese AG, a German braking and control systems provider for commercial vehicles and trains.

Sun Fuquan, vice-president of the Beijing-based Chinese Academy of Science and Technology for Development, said European companies continue to see business opportunities in China not only in areas like rapidly growing trend of high-quality domestic consumption, but also in new areas like new digital technologies that the country has shown time and again it readily adopts.