BUSINESS EU sets out to break monopoly of US dollar

EU sets out to break monopoly of US dollar

FRANKFURT, Sept. 20 (Xinhua) -- Carrying a dream of unity and common identity across Europe, the euro, the 20-year-young single currency covering over 330 million Europeans, is recently being pushed into the spotlight of underlying changes in the international currency system.

"We must do more to allow our single currency to play its full role on the international scene," European Commission President Jean-Claude Juncker vowed in his State of the Union address last Wednesday in Strasbourg, in a call to strengthen the single currency as "the face and the instrument of a new, more sovereign Europe" in order to break the dominance of the US dollar in the global financial system. 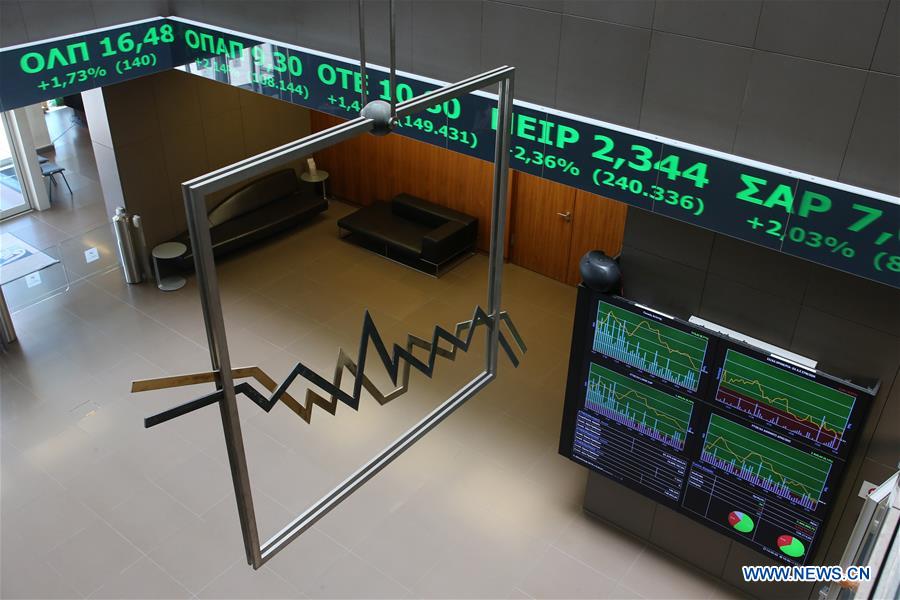 A view of the Athens stock exchange building in Athens, Greece on Aug. 20, 2018. (Photos: Xinhua)

"Before the end of the year, the Commission will present initiatives to strengthen the international role of the euro," said Juncker, sending a clear and unprecedented signal, highlighting the substantial resolution of the European Union (EU) to act accordingly in the near future, when the broad-based expansion of the euro area economy is expected to continue, albeit with growing uncertainty from the outside.

In fact, it had taken longer for Europe than the United States, Japan and emerging markets to get back on track of steady economic growth after the global financial crisis starting in 2008 and ensuing sovereign debt crisis, forcing Europe to address immediate crises in Greece, Ireland, Spain, Portugal and Italy rather than to try to find a solution to the root cause of structural defects related to the single currency bloc.

Almost since European Central Bank (ECB) President Mario Draghi in July 2012 pledged that the ECB "is ready to do whatever it takes to preserve the euro," the euro area regained the momentum to recover, even if frailly at the start, which yet created increasingly more space for policymakers to tackle structural problems as well as infuse more confidence to raise the status of the single currency.

As of the second quarter of 2018, five years of continued economic expansion were seen in the euro area, with the labor market improving notably and extensive deleveraging proceeding -- although not easily. Looking ahead, the latest ECB macroeconomic report released last Thursday foresees annual growth of 2.0 percent in 2018, 1.8 percent in 2019 and 1.7 percent in 2020, believing that economic expansion in the eurozone will remain solid, mainly supported by strong domestic demand.

"An interest rate hike by the ECB is expected next year, which will help boost the euro. The opportunity for the euro to strengthen its position is coming," commented Zhao Xueqing, research fellow of Institute of International Finance, Bank of China.

However, uncertainties related to global factors, above all the threat of increased protectionism stemming from US President Donald Trump's administration, have been a growing headache for Europe, which in turn largely impels the EU to be weaned from dependence on the opposite side of the Atlantic.

"It is absurd that Europe pays for 80 percent of its energy import bill -- worth 300 billion euros a year -- in US dollars when only roughly 2 percent of our energy imports come from the United States," Juncker complained.

Furthermore, Juncker called it "ridiculous" that European companies buy European planes in dollars instead of euros. "This all needs to be changed," he noted, against the backdrop of the rising mistrust and widening gulf between the EU and the United States.

However, disparity between the euro and the dollar remains significantly wide so far. For instance, the dollar's share of currency reserves reported to the International Monetary Fund (IMF) stands at around 60 percent, while the euro's share of global reserves -- with only 20 percent -- falls far behind.

Rome was not built in a day. The euro must have patience and perseverance in chasing the greenback, for which a series of specific projects should be consistently carried forward and accomplished by the EU.

First of all, improving the functioning of the EMU remains a priority. "We must first put our own house in order by strengthening and deepening our Economic and Monetary Union, as we have already started to do," Juncker said.

Speaking at a hearing of the European Parliament in July, Draghi urged further convergence and integration among euro area member states by completing the banking union with a European deposit insurance scheme, by bolstering a crisis management framework, for example, strengthening the permanent firewall for the eurozone -- the European Stability Mechanism (ESM), and by building a capital markets union.

"None of the measures are possible without trust between member states, and that requires national governments to play their part in increasing the resilience of their economies and modernising economic structures," Draghi underlined.

"We must increase Europe's autonomy and sovereignty in trade, economic and financial policies," German Foreign Minister Heiko Maas said last month in Berlin. "It will not be easy, but we have already begun to do it."

Commenting on the plan of creating an independent payment system in Europe, Zhao told Xinhua that geopolitical risks, including US unilateral sanctions against Iran, where plenty of European companies are present, have pushed up a sense of urgency for European policymakers to establish independent payment and settlement infrastructures.

"On the other hand, with the help of a new financial infrastructure, the euro area will be able to benefit from Brexit -- to resettle a massive euro settlement from London to the continent of Europe," she added.

Moreover, strengthening the euro's global role would require more unity and deeper EU reforms. Zhao pointed out that a certain extent of fiscal synergy would be necessary to preserve monetary stability, and communication efficiency at different levels within the EU should be enhanced.

Draghi said that the ECB stands ready to cooperate with the EU Commission and member states on defining or enhancing the international role of the euro, even though it's not part of the ECB's mandate. The EU's endeavor to enhance the euro and break the monopoly of the dollar may not necessarily result in a thorough replacement of the greenback; instead, Europe appears to be making strides towards a multipolar international monetary system, a widely welcomed move.

The share of dollar reserves has shrunk for five consecutive quarters as the greenback weakened in the first three months of 2018, while the euro, Chinese renminbi (RMB) and British sterling's shares of reserves increased, according to the IMF, showcasing a strong trend toward "de-dollarisation."

While getting increasingly more international recognition, the RMB, which was included in the IMF's Special Drawing Rights (SDR) basket as a fifth currency two years ago, is also committed to contributing to a more multipolar economic order.

At the end of 2017, the total RMB-denominated financial assets held by foreign institutions and individuals amounted to 4.28 trillion yuan ($625.7 billion), up 41.3 percent year on year.

The ECB as well as the central banks of Germany, France and others have added RMB to their foreign exchange reserve pool and accordingly reduced their dollar reserves.

"There must be further opportunities of cooperation between the euro and RMB, as 'de-dollarisation' proceeds," Zhao said. Examples of cooperation include actively adopting local currencies for settlement in bilateral trade, linking factor markets and exchanges between China and Europe and applying bilateral currency swaps more extensively.