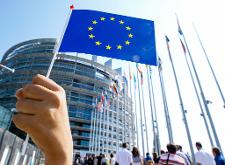 BRUSSELS, Jan. 7 (Xinhua) -- European Union (EU) states agree on Monday to supervise investment firms based on their scale, and subject the largest ones to banking rules.

There are about 6,000 investment firms in the European Economic Area. Most of them are rather small, but a limited number of investment firms hold a significant proportion of all assets and provide a very broad range of services. Until now, all investment firms have been subject to the same capital, liquidity and risk management rules.

The new rules, agreed by representatives from EU member state governments, would place different requirements for investment firms according to their size, nature and complexity, according to a press release of the Council of the EU.

The largest firms would be subject to the full banking prudential regime and would be supervised as credit institutions. Smaller firms would follow easier rules.

The Council text further strengthens rules that would apply to third country investment firms. It sets out in greater detail some of the requirements for giving them access to the single market and grants additional powers to the European Commission.

Given that many of the large investment firms in Europe are based in London and the United Kingdom is set to exit the EU shortly, the rules are expected to hit London-based investment firms.

The rules agreed on Monday does not become law immediately. The Council and the European Parliament will have to reach consensus on the texts after negotiations.