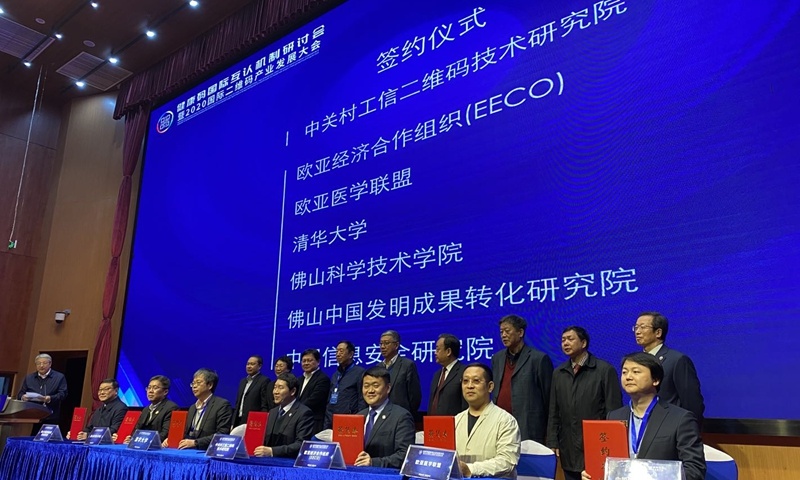 Eurasian countries have shown great interest in an international digital health code for individuals proposed by China to prevent the spread of the coronavirus, said representatives from various medical associations on Monday.

"Countries like Russia, Kazakhstan and Armenia have expressed a lot of interests in introducing such mechanism to push forward the global cooperation on the COVID-19 QR code from medical and informational technology perspectives," Ge Jian, Chairman of the General Council of the Eurasian Economic Cooperation Organization (EECO) told the Global Times on a seminar held in Foshan, South China's Guangdong Province on Monday.

The seminar was set up to discuss the International Mutual Recognition Mechanism of Health Code, which aims to speed up cross-border personnel exchanges by recognizing a person's health via a QR code which China has established months ago to combat the virus.

Ge said the QR code would act as a "digital passport" and may become a necessary step to recover cross-border personnel exchanges and work resumption in the post-COVID era, especially between countries establishing "green channels" or "fast lanes".

"We are interested in China's experiences. China has put the QR health code system into use in more than 100 cities. A QR code which shows a person's health status would greatly ease the burden of medical staff and the whole medical care system," Aizhan Sadykova, President of the Eurasian Medical Association, said in a virtual speech at the seminar.

Many experts have pointed out that China's proposal has to ease political mistrust and concerns over user privacy and data security. The head of a Chinese research institute suggested each country would manage the data of their own citizens.

"The mechanism would be based on four principles: safeguarding information security of the countries involved, guaranteeing user privacy, standardizing code recognition and providing efficiency and convenience," Zhang Chao, President of Beijing-based Zhongguancun Industry & Information Research Institute of Two-dimensional Code Technology (ZIIOT), told the Global Times at the seminar on Monday.

A three-step process would better enhance the protection of user privacy and data security. "A third-party supervisor would recognize who you are, an operator is responsible for encrypting your data, and the platform will deal with the data," Zhang proposed.

Zhang cited an example of how such mechanism may work. "If a Russian comes to China, a request will be first sent to the mechanism's global center in order to confirm where the person comes from. Then the information will go to Russia's digital health system and once the person's information passes validation, a digital QR health code will be generated and approved by the Chinese inspection staff at the border," Zhang said.

A scan of a person's health code that produces a green code indicates they are likely not infected with the coronavirus, a yellow or red code would mean mandatory quarantine because the individual may have been in close contact with virus. People in China need to show a green code before entering supermarkets, hotels, parks and restaurants.

A study by Oxford University released in April found that if 56 percent of a country's population used a tracking app, the coronavirus epidemic could be completely suppressed.

Countries including Australia, Japan and Singapore have all used tracking apps to trace peoples' movements and potential exposure to COVID-19, but so far there is no mutual recognition mechanism for the apps.

During the seminar, a technical committee was established, with the participation of more than 11 medical associations from Germany, Russia, Mongolia, Uzbekistan, Bulgaria, Pakistan, Kazakhstan, a hospital in Kyrgyzstan, Fund for Regional Development of Chinese-Armenian Relations, the Eurasian Medical Association and the EECO.

Zhang said such mechanism could be a long-term use. "Whenever a virus crops up, the mechanism would help humans to respond quickly."