The European Central Bank is expected to leave its stimulus efforts running at full steam Thursday — even as the economy shows signs of recovery thanks to the easing of pandemic restrictions. 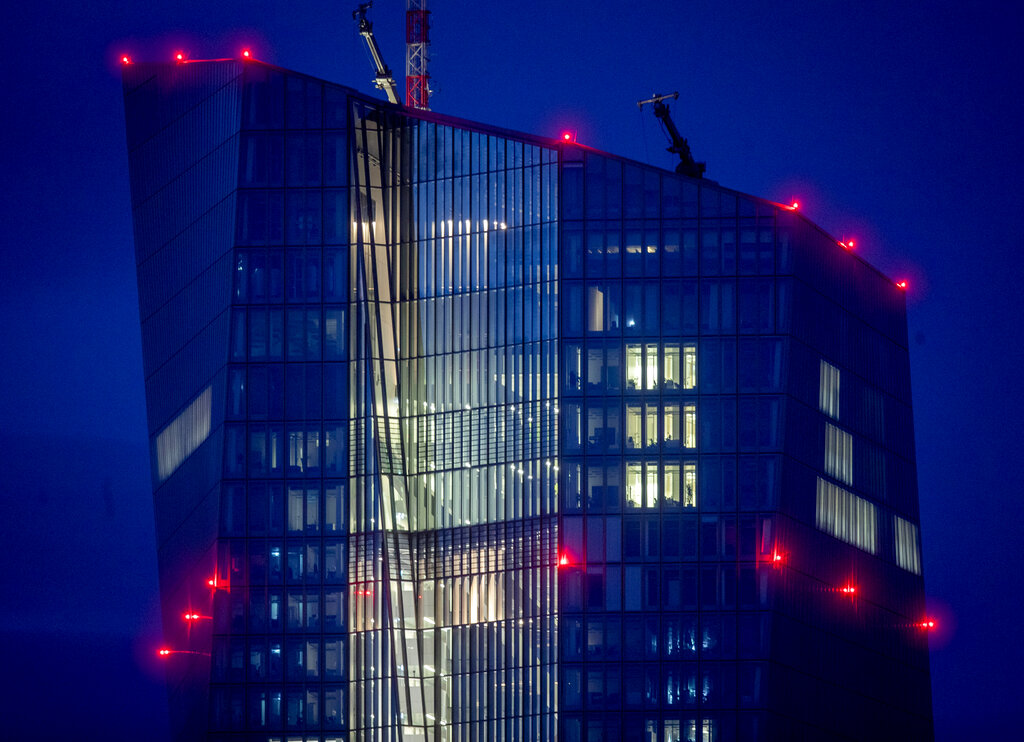 In this Oct.5,2020 file photo red warning lights shine on the building of the European Central Bank in Frankfurt, Germany. (Photo: AP)

And that could present a challenge for ECB head Christine Lagarde. She faces a balancing act: acknowledging improving economic data without triggering a premature market reaction that anticipates the eventual reduction in central bank support for the economy.

Any talk of a stimulus taper could mean higher borrowing costs for companies — the last thing the ECB wants right now.

“Even if economic developments would in our view clearly justify at least having a first tapering discussion, the sheer mention of such a discussion could push up bond yields further and consequently undermine the economic recovery before it has actually started," said Carsten Brzeski, global head of macro at ING bank.

The central bank for the 19 countries that use the shared euro currency has been purchasing around 85 billion euros per month in government and corporate bonds as part of a 1.85 trillion euro ($2.25 trillion) effort slated to run at least through early next year. The purchases drive up the prices of bonds and drives down their interest yields, since price and yield move in opposite directions. That influences longer-term borrowing costs throughout the economy, sending them lower.

That's exactly what the bank wants at a time when many companies are struggling with reduced demand and higher debt and need to keep credit lines open so they can get to the other side of the pandemic.

Any hint, however, that the ECB is thinking about tapering the purchases could send market rates higher earlier than the central bankers would like. That's why any discussion could be postponed until the bank's Sept. 9 meeting or later.

The U.S. Federal Reserve will face a similar communications challenge; several officials have said that as the economy recovers, the U.S. central bank will eventually have to reassess its stance. Currently it is purchasing $120 billion in bonds each month. Fed policymakers next meet June 15-16.

IHS Markit's surveys of purchasing managers showed activity increasing sharply in May, including for the hard-hit services sector. The index reached 57.1, with anything over 50 indicating expansion. Statistics for economic output in the first quarter were revised up to minus 0.3% from minus 0.6%; the ECB expects a strong rebound in the second half of the year and growth of 4.0% for all of 2021.

Rising inflation also complicates the ECB's messaging. Normally, rising prices would lead a central bank to withdraw its stimulus. But in this case, ECB officials and economists say recent higher inflation figures are the result of temporary factors that will fade, leaving inflation below the ECB goal.

Eurozone annual inflation hit 2.0% in May due largely to higher oil prices. The ECB's goal is less than but close to 2%. The base comparison to lower oil prices during the pandemic year 2020 will soon drop out of the statistics, however, meaning post-pandemic inflation could be weaker than current figures might otherwise suggest.

Top bank officials have been making stimulus-supporting comments in recent days, leading analysts to think no real change is coming on Thursday. At its March 11 meeting, the government council said it would “significantly increase” the pandemic purchases during the April-June quarter.

“After co-ordinated messages from ECB speakers in recent days, we expect the ECB to hold the course and keep purchasing assets at the current high pace,” said Paul Diggle, deputy chief economist at Aberdeen Standard Investments. "But either way, investors will want to see the ECB thread the needle of talking up the economic recovery, while avoiding the dreaded “tapering” word.”