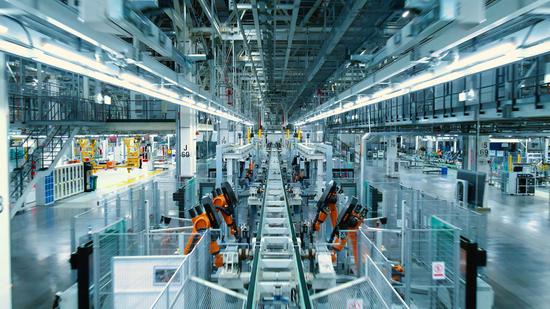 At the Universal Beijing Resort, what attracted the attention of many tourists were not only the signature Transformers and Jurassic World themed zones, but also a special BMW roadshow therein, which showcased a new X5 vehicle, one of the German carmaker's most popular models.

According to the company, the X5 has been among its best-selling models worldwide since its debut in 1999. But what made the launch of the new X5 model especially significant was its new position as "the flagship of BMW's locally produced lineup."

On March 31, the company launched its all-new X5 with a China-exclusive wheelbase design, marking the first time that the model was made in China.

At a time when many Chinese cities are fighting against COVID-19 resurgences, BMW's launch of the new model shows its strong confidence in China's anti-pandemic measures and the country's stable and sustained economic development.

Many other European enterprises have also fixed their eyes on the booming Chinese market, and they foresee long-term success regarding China's promising economic prospects and sound business environment.

On Feb. 11, the German auto giant strengthened its partnership in China by extending the joint-venture contract of BBA until 2040, and increased its shares from 50 percent to 75 percent by investing some 27.9 billion yuan (about 4.4 billion U.S. dollars).

"We continue to expand our long and successful commitment to China," said Oliver Zipse, chairman of the board of management of BMW AG. "Our continued success in the world's largest automotive market can only go hand in hand with the growth and further development of our BBA joint venture."

Bearing a total investment of more than 30 billion yuan, the project will be aimed at economic and trade cooperation between China and Europe, as well as northeast China's revitalization.

This joint project was expected to be put into operation around the end of 2024 with an annual production capacity of 150,000 vehicles, the automakers noted.

Swiss compressor manufacturer Burckhardt Compression AG is also betting on China's super-large market. In 2021, the company acquired the remaining 40 percent of the shares of Shenyang Yuanda Compressor, based in Shenyang City, and made it a wholly owned subsidiary.

The Swiss company told Xinhua that the sales revenue of Shenyang Yuanda Compressor has maintained double-digit growth in recent years, having expanded its factory area from 89,000 square meters to 164,000 square meters to increase production capacity, which is currently occupied through to October.

According to the latest data from the Ministry of Commerce, foreign direct investment into the Chinese mainland, in actual use, expanded 37.9 percent year on year to 243.7 billion yuan in the first two months of this year.

China remained one of the top investment destinations for foreign companies, especially German firms. A report released by the German Chamber of Commerce in China and KPMG showed that nearly 60 percent of German companies in China reported improved business operations last year and 71 percent plan further investment in the country.

China's determination and confidence in high-level opening-up and continuous effort to improve the business environment for multinational enterprises has made the Chinese market more attractive, which brought win-win outcomes both for Chinese and multinational companies, noted Jochen Goller, president and CEO of BMW China.