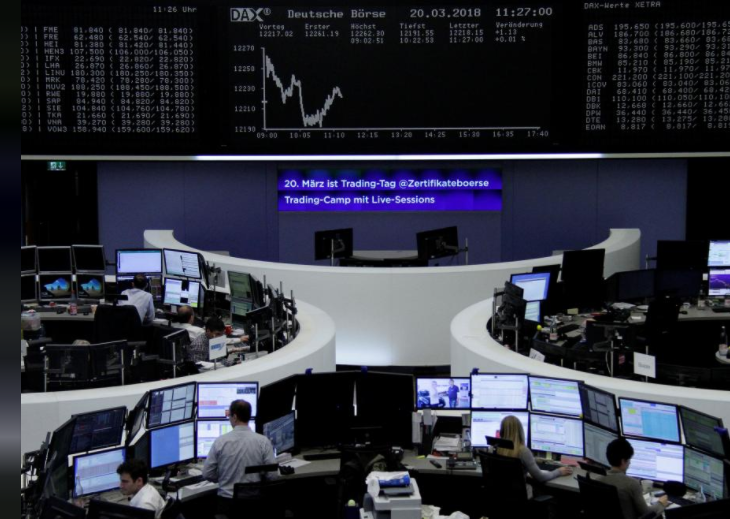 The German share price index, DAX board, is seen at the stock exchange in Frankfurt, Germany, March 20, 2018 (Photo: Reuters)

European shares fell on Friday, with autos and basic resources stocks bearing the brunt of a wide sell-off triggered by mounting worries that U.S. tariffs on up to $60 billion of imports from China could escalate.

Most sectors were trading in negative territory, sending the pan-regional STOXX 600 benchmark index falling for a third day, down 0.9 percent to its lowest level since February 2017.

All eyes were on the response from China, which urged the United States on Friday to “pull back from the brink”, and unveiled its own plans to impose tariffs on up to $3 billion of U.S. imports.

Although there are risks that the tariffs could trigger a full-blown trade war, some investors said they still did not expect that to happen, highlighting that the retaliation measures announced by China remained relatively mild.

Caution, however, pushed investors into defensive stocks like utilities .SX8P and telecoms .SXKP, which bucked the trend with gains of 0.1 percent and 0.3 percent respectively, as they are seen as less exposed to a deterioration in global trade.

Euro zone indexes including the export-sensitive DAX .GDAXI also fell 1.8 percent but remained above early March lows, while the FTSE .FTSE declined 0.4 percent to fresh 15-month lows reached on the back of a strengthening pound.

“Our central scenario remains one in which retaliation will be contained and will leave little impact on growth, but the risk of it happening alone is enough for us to maintain a preference for defensive assets,” said UniCredit economists led by Chiara Silvestre in a note.

Among the few gainers on Friday were shares in precious metals miners Fresnillo (FRES.L), Randgold (RRS.L) and Polymetal (POLYP.L), all up between 0.8 and 4.2 percent, as the gold price rose on the back of growing demand for safe haven assets.

Still on the tariff front, the previously announced U.S. tariffs on steel and aluminum imports will take effect on Friday but more countries, including the European Union, have obtained a temporary exemption.

“In theory it would be a soothing news but in reality it risks making the confrontation between the U.S and China harsher,” said JCI Capital fund manager Alessandro Balsotti.

Elsewhere in corporate arena, Indivior (INDV.L) plunged 6.3 percent following an U.S. court ruling against the maker of opioid addiction treatment Suboxone. Indivior said it intended to appeal against the ruling in favor of generic competitor Alvogen.