European shares flat on the week as earnings season peaks 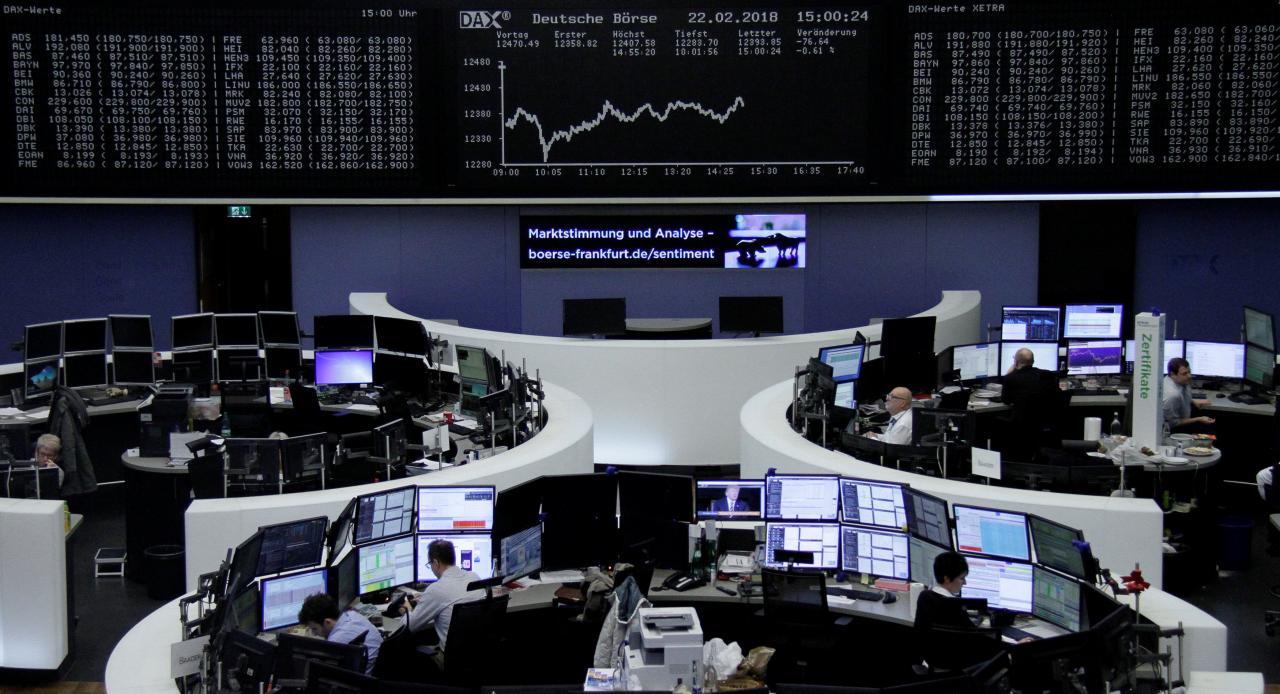 The German share price index, DAX board, is seen at the stock exchange in Frankfurt, Germany, February 22, 2018. REUTERS/Staff/Remote

European shares ended the day in positive territory after a choppy session, posting a slim weekly gain as investors digested a flurry of company results that included disappointing updates from Royal Bank of Scotland and Valeo.

“The STOXX is on course to end the week flat as markets stabilize and volatility calms...,” said Chris Beauchamp, Chief Market Analyst at IG just before the close.

“While there hasn’t been much upside, we have also successfully navigated another week without a major selloff, an encouraging development that clearly bodes well for the week ahead.”

RBS (RBS.L) declined 4.8 percent after posting its first full-year profit since 2007. Traders said the underlying result missed expectations, while the lack of an update on a settlement with the U.S. Department of Justice for mis-selling toxic mortgage-backed securities also weighed.

French auto parts maker Valeo (VLOF.PA) slumped 11 percent to a six-month low, making it the biggest faller on the STOXX 600 . Its second-half profit fell on adverse exchange rates and raw materials prices, prompting UBS to cut its price target on the stock.

Elsewhere among financials, Standard Life Aberdeen (SLA.L) fell 2.5 percent after agreeing to sell the bulk of its insurance business to Phoenix Group (PHNX.L) for 3.24 billion pounds, while Swiss RE rose 2.5 percent after reporting better than expected 2017 net income.

In the energy sector, Neste (NESTE.HE) hit a record high following an upgrade from Barclays, which said demand for renewable fuels should continue to increase. It ended the day up 3.5 percent.

Telecoms were lifted by a 5 percent rise in BT Group (BT.L), after Britain’s telecoms regulator OFCOM set a more generous cap on prices the company can charge rivals to use its fast broadband service.

Berenberg analysts upgraded BT to buy from hold saying clarity over the investment case was set to improve and that its share prices already reflected “fairly negative” outcomes on regulation, its pension review, and capex risk.

The sector, which has been underperforming the broader market in the past few years on worries over competition, regulation and costly investment plans, was also boosted by gains in Telecom Italia .TLIT.MI, up 2.1 percent on heavy newsflow about possible dealmaking.

Three sources told Reuters that the Italian former phone monopoly had chosen Goldman Sachs and Credit Suisse to work on a spin-off of its fixed-line network.