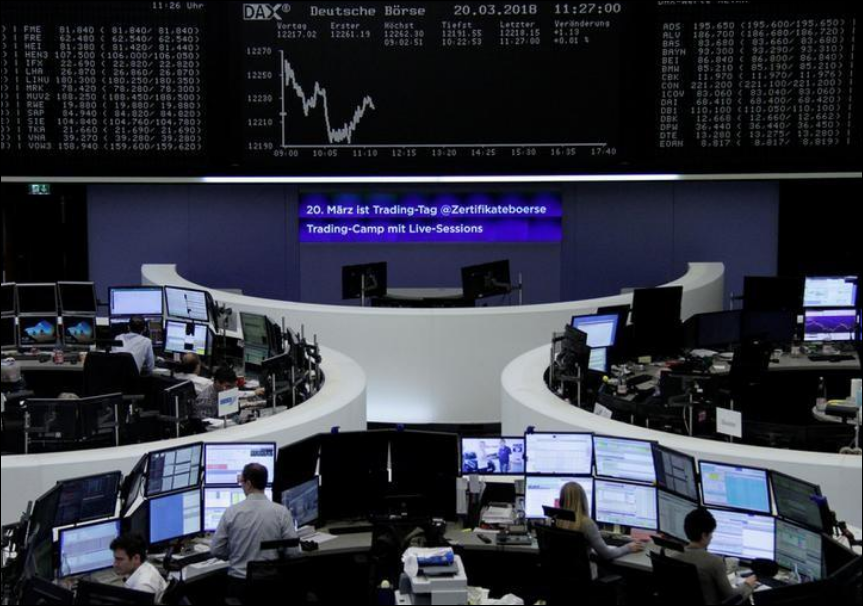 The German share price index, DAX board, is seen at the stock exchange in Frankfurt, Germany, March 20, 2018. (Photo: Reuters)

European shares breathed a sigh of relief on Friday with Italian stocks supported after a deal to form a coalition government ended three months of political deadlock and removed the risk of another general election.

Italian stocks .FTMIB rallied as much as 2.9 percent, the standout performers in Europe as Italian banks .FTIT8300 gained 3.8 percent. Recent political uncertainty has roiled Italian stocks, resulting in a slide of more than 9 percent for the Italian benchmark in May, its worst month since June 2016.

Giuseppe Conte was sworn in on Friday as Italy’s prime minister, heading western Europe’s first anti-establishment government. Investors had feared that a repeat vote could become a proxy referendum on Italy’s euro membership.

Shares in Italian banks Banco BPM (BAMI.MI), BPER (EMII.MI), UBI (UBI.MI) and Intesa Sanpaolo (ISP.MI) were among the biggest risers on the STOXX, up between 3.3 percent to 8.5 percent after sustaining heavy losses in the previous month.

However, some market watchers remained cautious given that Italy’s anti-establishment parties, the League and the 5-Star Movement, are planning to spend big.

Italian shares ended off highs, weighed down by a Reuters report that EU lawmakers from the two parties forming its new government coalition backed this week a rejected proposal to set up funds to help countries quit the euro.

A trader at a European bank said the decline was also triggered by tecnhnical factors and a 4.5 percent slump in Fiat Chrysler (FCHA.MI) shares.

Fiat Chysler’s departing CEO Sergio Marchionne delivered a plan to ramp up sport utility vehicles and invest 9 billion euros in electric and hybrid cars in a bid to double operating profit by 2022. Some investors who had expected news about possible spin offs were disappointed.

Elsewhere Spanish equities .IBEX rose 1.8 percent after Spanish socialist Pedro Sanchez was catapulted to power, taking over as prime minister from veteran conservative Mariano Rajoy, who lost a no-confidence vote in the wake of a corruption scandal.

Away from politics, semiconductor stocks were a weak spot after shares in Dialog Semiconductor (DLGS.DE) plunged 15 percent. The chipmaker said that Apple was planning on cutting smartphone power chip orders, which will shave 5 percent off Dialog’s 2018 revenues.

“Becoming more positive for the investment case remains difficult due to the uncertainty related to the company’s Apple business,” analysts at Baader Helvea said in a note.

Elsewhere shares in Deutsche Bank (DBKGn.DE) recovered some of the previous session’s heavy losses, climbing 2.8 percent higher following Thursday’s drop of more than 7 percent in the after a report that the U.S. Federal Reserve last year designated the bank’s U.S. operations to be in “troubled condition”.

On Thursday, S&P downgraded Deutsche Bank’s credit rating to BBB+ from A-.