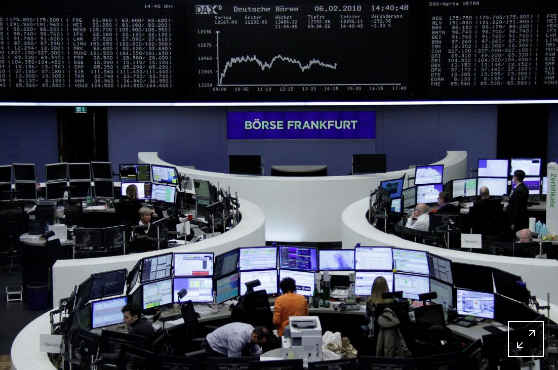 The German share price index, DAX board, is seen at the stock exchange in Frankfurt, Germany, February 6, 2018. REUTERS/Staff/Remote

European shares closed in negative territory on Thursday as volatility made a brutal comeback and ended a short-lived rebound after the beginning of the week’s global sell-off.

Europe’s VSTOXX volatility index .V2TX jumped to 32, its highest since the UK’s Brexit referendum, and all European bourses ended deep in the red.

In Frankfurt, growth-sensitive stocks such as Volkswagen (VOWG_p.DE) or BASF (BASFn.DE), lost 3.8 percent and 3.3 percent respectively.

The pan-European index is down more than 4 percent after equities took a battering worldwide this week.

“Technically, the rebound has failed,” said Mikael Jaccoby, of broker Oddo, explaining that markets are now clearly in a “risk-off” mode.

Results from ABB (ABBN.S), a bellwether of European heavy industry, failed to cheer investors who have loaded up on cyclical stocks since December in the hope of a profit boost from synchronized global growth. The stock plunged 6.7 percent.

Danish telecoms company TDC (TDC.CO) led the STOXX 600, shooting up by nearly 18 percent -- its best day since June 2007 -- after it rejected a takeover approach from Macquarie and three Danish pension funds.

Swiss Re’s (SRENH.S) shares were up 2.1 percent after the reinsurer said it was in talks with Japan’s SoftBank (9984.T) to sell a minority stake.

SocGen’s shares rose by 1.9 percent after the bank reported forecast-beating results despite a quarterly drop in profit.

“French retail revenues better than guidance and good numbers in markets, with equity derivatives back to normal,” Jefferies analysts said.

Italy’s UniCredit rose 2.1 percent after profit topped forecasts and Banco BPM (BAMI.MI) was up 0.3 percent after the bank raised its target for shedding bad loans.

France’s Pernod Ricard (PERP.PA), up 2.1 percent after it raised its profit goals, were among the other companies to gain after earnings statements.

“The question was does this correction change the earnings picture or the economic picture? At this point, no it doesn‘t,” said Pierre Bose, head of European strategy at Credit Suisse.

After this week’s sharp correction, valuations of the STOXX 600 have fallen back below their one-year average.

”It’s not cheap, but it’s much closer to fair value,“ Bose said. ”The market was moving close to vertically for the first few weeks of this year and absolute valuation has been a bit expensive for the past 18 months.

“From that point of view the correction that we’ve had is actually extremely helpful.”