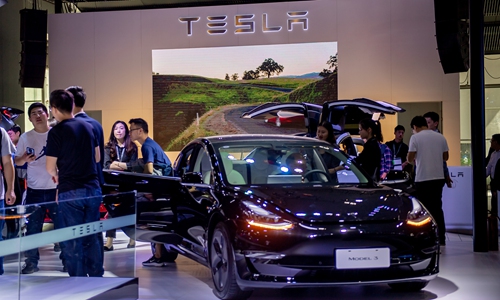 A Tesla Model 3 displayed at the Guangzhou Autoshow on November 22. (Photo: VCG)

China has been a keen supporter of NEVs and has implemented production quota requirements for automakers. However it cut subsidies for NEVs substantially this year as part of an overall plan to reduce subsidies, making the vehicles costlier. In October, NEV sales fell 45.6 percent from year-earlier levels.

Prior to the subsidy cut, China's market for NEVs, which include plug-in hybrids, battery-only electric vehicles and those powered by hydrogen fuel cells, had been a bright spot, with sales jumping 62 percent last year.

"For next year, we foresee the NEV market will continue to grow, maybe not as dramatically as in the past," Stephan Woellenstein, Volkswagen Group's chief in China, told Reuters in an interview on the sidelines of the Guangzhou Autoshow last week.

A key part of the revival is linked to more big automakers launching NEV models, he said. This would help NEVs become more mainstream. "This normally makes a difference and will also change consumer perceptions and drive the market."

Volkswagen AG is ramping up production of electric cars to about 1 million vehicles by end of 2022, according to manufacturing plans seen by Reuters, enabling the German carmaker to leapfrog Tesla Inc and making China the key battleground.

Volkswagen is preparing two Chinese factories to build electric cars next year. The Chinese plants will have a production capacity of 600,000 vehicles, which have not been previously reported.

Tesla is still trying to reach its goal of making more than 500,000 cars a year by building a new factory in Shanghai.

On November 22, Tesla officially unveiled its Model 3 electric vehicle manufactured in its Shanghai gigafactory, and it said it would start delivering the cars before late January.

The made-in-China Model 3 vehicles have entered Tesla-run stores in China and also appeared at the Auto show.

However, as it has not yet obtained the regulatory permit to drive on Chinese roads, the Shanghai-built Model 3 currently can only be used for in-store display instead of test drives.

Carmakers such as Volkswagen, Toyota's Lexus, Daimler's Mercedes Benz and Tesla came out in force at the Guangzhou Autoshow to showcase newly launched electric vehicles with fresh designs.

Brian Gu, president of Guangzhou-based electric vehicle start-up XPeng, which just raised $400 million from Xiaomi and other investors, said he believed that improvements to the country's charging infrastructure would help NEV sales to recover next year.

Another positive is the falling prices of NEV as more automakers start producing vehicles, he added.

"In about two years, from my perspective, electric vehicles will be significantly cheaper than internal combustion engine cars, as battery costs will come down very rapidly and volumes will drag down costs."

However, not all executives were as optimistic. Ma Fanglie, general manager of BAIC Group's electric vehicle unit BAIC BluePark, said the industry is "feeling a lot of pressure" and that more supportive policies were needed.

Fu Bingfeng, executive vice chairman of the China Association of Automobile Manufacturers said that government bodies were discussing ways to support the industry in the medium to long term.

"Our work now will focus on boosting real consumption-side demand, including improving the infrastructure and supply chains."