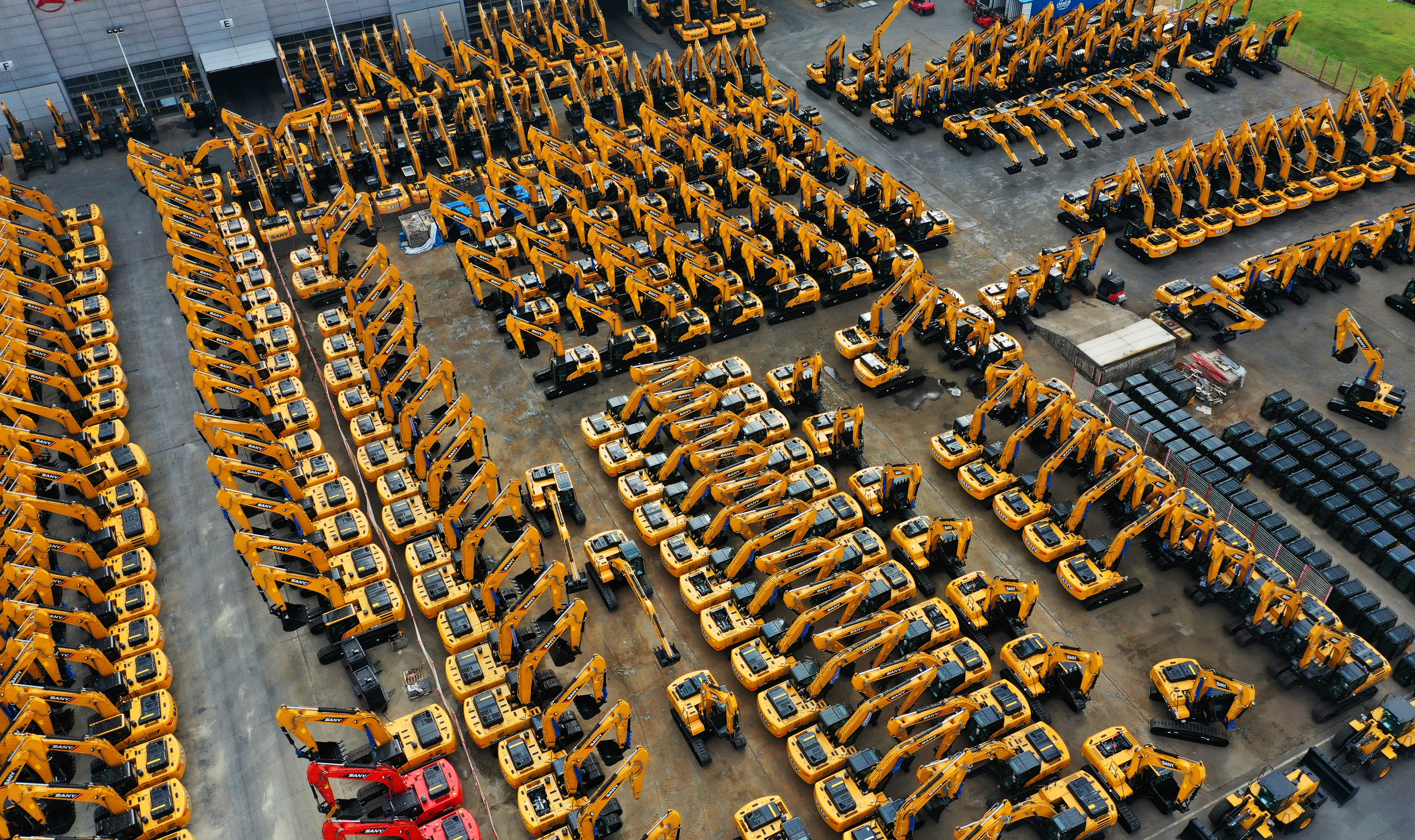 Excavators pile up after rolling off a production line in Shanghai. (Photo: China Daily)

Excavator sales grew by over 50 percent on a yearly basis for the fifth consecutive month in August in China in a strong sign that the country is relying on infrastructure spending to offset the COVID-19 economic shocks, experts said.

According to them, full-year sales of excavators, engineering vehicles widely used in construction, are expected to be around 300,000 units. The country's 25 excavator manufacturing companies sold 20,900 excavators in August, up 51.3 percent on a yearly basis, according to data from the China Construction Machinery Association.

"The drag on infrastructure construction during the flood season in South China is fading, and financial instruments such as special Treasury bonds are being allocated continuously for use. Commencement of major infrastructure projects in various provinces has boosted the demand for excavators," said Wu Chaoming, deputy-head of the Chasing International Economic Institute, during an interview with Securities Daily.

Excavator sales have also been buoyed by the over 3.4-percent growth on a yearly basis in real estate investment during the first seven months of the year.

"Demand for excavators has also risen as companies are looking to replace old machines with new ones that conform to the National IV emission standards," he said.

Fang Jianxian, general manager of lmjx.net, the official website of the road machine chapter of the CCMA, said work has resumed on several overseas projects as the epidemic is being reined in in several countries.

"Although the overall construction machinery exports declined in the first half of this year, excavator exports increased by 17.8 percent on a yearly basis. We estimate that excavator exports will continue to grow in the second half of the year," he said.

The high growth in excavator sales is also reflected in the performance of related listed companies. The semiannual financial report from Chinese heavy machinery firm Sany Group showed that in the first half of this year, the company's excavator sales increased by 17.22 percent on a yearly basis to 18.6 billion yuan ($2.7 billion).

Fang from lmjx.net believes that the growth momentum would be sustained in the fourth quarter of the year. Although the monthly growth rates may vary, excavator sales for the whole year are set to hit a record, he said.

"In 2021, as the country continues to focus on a new development pattern featuring dual circulation, which takes the domestic market as the mainstay while letting domestic and foreign markets boost each other, infrastructure construction will boom and so will excavator sales," he said.

Tao Bo, an analyst with the BOC International (China) Co Ltd, told Securities Daily that excavator sales in September will see a 40-percent growth on a monthly basis, and the strong demand will be sustained in the fourth quarter. Total sales for the whole year are expected to reach 300,000 units, he said.