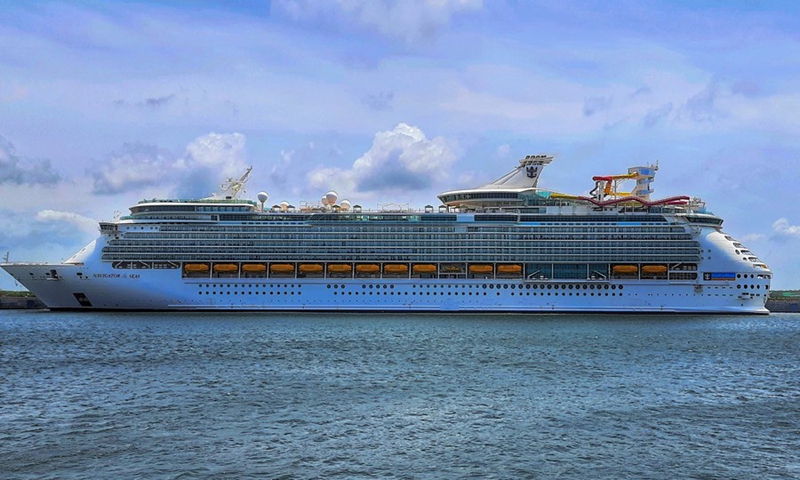 A cruise ship calls at the Hambantota International Port (HIP) for the purposes of receiving bunkers in Hambantota, Sri Lanka, Aug. 2, 2021.(Photo: Xinhua)

After Sri Lanka confirmed to Indian media that a Chinese research vessel has been allowed to dock at the Hambantota port, Chinese experts said on Monday that such a move is not only normal but also help generate revenue for the country facing an economic crisis and that India has no rights to interfere.

Citing Sri Lanka's army spokesman, Indian media outlet PTI reported on Monday that Sri Lanka has allowed the Chinese research vessel, the Yuan Wang 5, to dock at Hambantota port this month. India officials have previously raised worries and said they would be monitoring the development.

Tian Shichen, founder of the Global Governance Institution and director of the International Center for the Law of Military Operations, told the Global Times that India has no right to meddle in Sri Lanka's domestic affairs, and behind India's hype of the normal port call is its oversensitiveness.

Tian said that Indian ships make similar port calls in other countries so there is no reason to make a fuss out of a lawful and reasonable port call by a Chinese ship.

Sri Lanka's Defense Ministry also noted that the call is "nothing unusual" as vessels from countries including India, Japan and Australia periodically make such calls, according to Indian news outlet The Hindu.

In 2017, Sri Lanka leased the southern port to China Merchant Port Holdings. Despite the economic woes afflicting Sri Lanka, the port's dry bulk cargo increased 1.5 percent year-on-year in the first five months of 2022. The Port of Hambantota also facilitated the transportation of 5,000 tons of oil to the fuel-starved country.

Chinese experts said that ships making port calls generate foreign exchange revenue for the host country for services such as refueling and obtaining supplies, and this could provide some help to Sri Lanka to address its current economic woes.

Liu Xiaoxue, an associate research fellow at the Chinese Academy of Social Sciences' National Institute of International Strategy, told the Global Times on Monday that the mission of the Hambantota, a commercial port run by a Chinese company, is to serve ships from all over the world.

"Now Sri Lanka is facing an economic crisis, and a port such as Hambantota needs more ships to make more calls so as to generate revenues and dollars for the Sri Lankan government," Liu said.