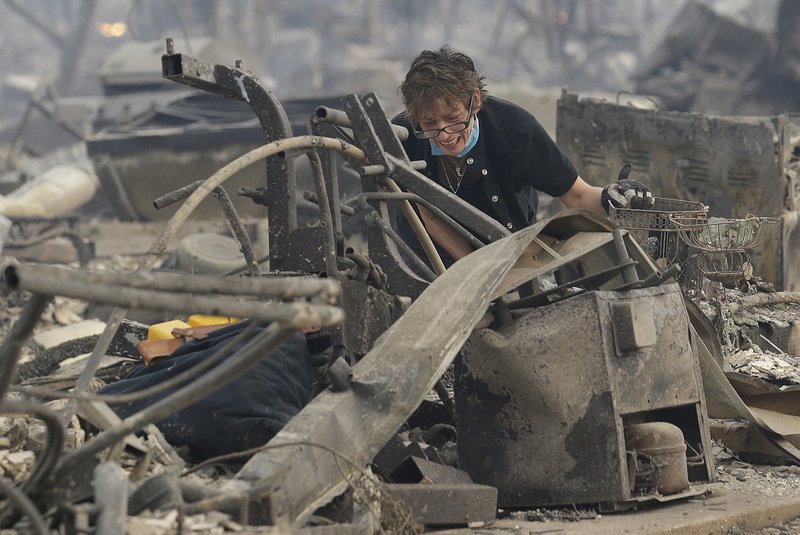 Kristine Pond reacts as she searches the remains of her family's home destroyed by a fire in Santa Rosa, Calif. on  Oct. 9, 2017. (File photo: AP)

The utility still faces billions of dollars in potential damages from other wildfires, including a blaze last year that killed at least 86 people and became the nation’s deadliest in a century. It’s not clear what sparked the flames that leveled the town of Paradise, but PG&E equipment has been blamed for other fires.

Bankruptcy also would give the company “breathing space” to formulate a plan to prevent its equipment from causing more catastrophic fires in the future, said Jared Ellias, a bankruptcy attorney who teaches at the University of California, Hastings College of the Law.

“They are not out of the woods. There are more fires to come,” Ellias said.

Investigators said a private electrical system, not equipment belonging to PG&E , caused the October 2017 wildfire that destroyed more than 5,600 buildings in Sonoma and Napa counties. California’s firefighting agency concluded that the blaze started next to a residence, and it did not find any violations of state law.

It was great news for PG&E, which saw its stock price close at $13.35, a nearly 75 percent jump. Still, the company hinted in a statement that it wasn’t retreating from its bankruptcy plan.

“Regardless of today’s announcement, PG&E still faces extensive litigation, significant potential liabilities and a deteriorating financial situation, which was further impaired by the recent credit agency downgrades to below investment grade,” the company said.

PG&E announced Jan. 14 that it will file for bankruptcy in the face of at least $30 billion in potential damages over California wildfires in 2017 and 2018.

Gov. Gavin Newsom said his office estimates that $17 billion of that figure is from the Tubbs Fire in wine country. Newsom said the figure raises questions about whether PG&E would file for bankruptcy.

The utility is facing hundreds of lawsuits from victims of multiple fires.

A bankruptcy filing, which is expected Tuesday, would put an immediate stop to those lawsuits and consolidate them before a bankruptcy judge. In bankruptcy court, the wildfire victims have little chance of getting punitive damages or taking their claims to a jury, and many experts think they will have to settle for less money.

Avoiding jury trials makes it likely that PG&E will still file for bankruptcy, said Michael Kelly, an attorney who is representing victims of several wine country fires in lawsuits against PG&E.

“I don’t think it has anything to do with money,” Kelly said. “I think it all has to do with lawsuit tactics.”

Kelly vowed to keep fighting the company despite the finding by state fire investigators — a sign that PG&E won’t be able to easily shed potential liability for the blaze.

Fire investigators’ conclusions are not binding in court, where plaintiffs could dispute them and present evidence in favor of an alternate finding, said Scott McNutt, another bankruptcy attorney who teaches at the University of California, Davis School of Law.

“They’re facing many other claims for other fires that alone compel them to file for bankruptcy,” McNutt said.