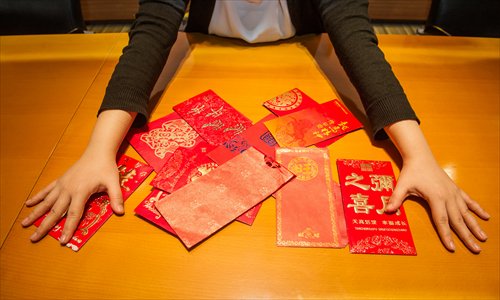 Year-end bonuses are usually linked with employees' performance as well as the total profits a company managed to make in a business year. (Photo: Global Times)

Seeds, fitness classes, condoms and expired calendars are the among the strangest year-end bonuses that white-collar workers in China have received during Spring Festival, according to a new survey.

The survey, conducted by Zhilian Zhaopin, one of China's top job-hunting websites, showcased its respondents' weirdest year-end bonuses. Some said they have also received certificates of merit, stocks that could be sold after 10 years or hammers as their year-end bonus, items that they found "extremely confusing."

In the survey, 15.3 percent of white-collar workers said they were "not sure" about their annual bonus, and 40 percent were sure that they would not get it this year, twice as much as that of last year.

Meanwhile, the average expected 2019 year-end bonus for male white-collar workers is 10,922 yuan, 45 percent higher than for women. The gap has widened further this year.