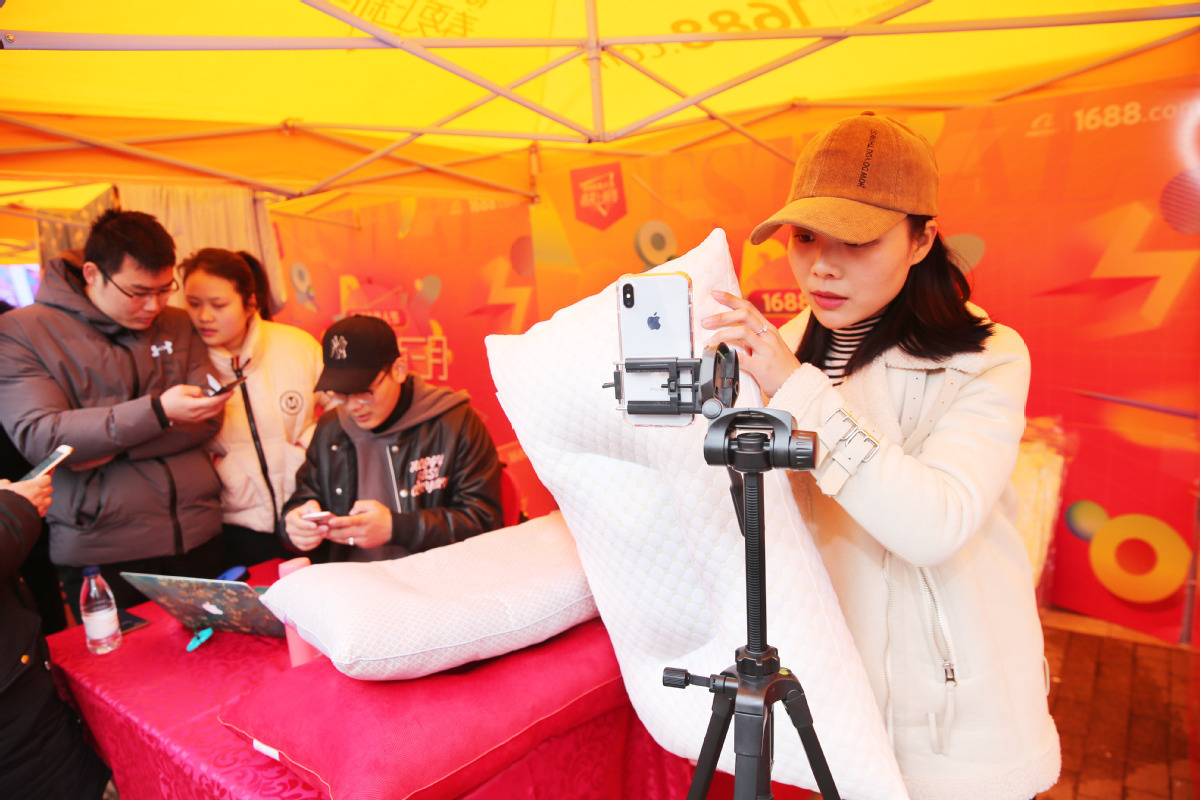 An entrepreneur (right) demonstrates her textile products through livestreaming during a promotional activity launched by 1688.com, a B2B platform of Alibaba Group, in Nantong, Jiangsu province. (Photo: China Daily)

With COVID-19 dealing a heavy blow to global trade, some companies are starting to look in their own backyards, in a sense.

But the switch from exports to domestic sales is no easy feat. Limited domestic sales channels, lack of brand awareness and varying requirements and trade settlement methods between domestic and foreign trade are all substantial obstacles impeding its full pursuit.

1688.com, a B2B platform of Alibaba Group, is looking to lend a helping hand. The company plans to overhaul its digitalization plan dedicated to small and medium-sized factories and introduce a new model that allows them to conduct both wholesale and retail business at the same time.

During a conference with suppliers and partners in April, 1688.com announced plans to construct 700 logistics routes across the nation's core industrial zones, and build 100,000 "super factories" within three years.

"Reconstructing new trade and consumption patterns through digitalization is integral to promote the dual-circulation pattern," said 1688 General Manager Wang Hai. "For SMEs to take prompt action, we feel a responsibility to provide them with the necessary infrastructure and make things easier for them."

While lesser known outside of China, 1688.com is host to a huge number of Chinese wholesalers selling a variety of merchandise in the domestic market, and is a key part of the supply chain feeding retailers on Alibaba's Taobao and Tmall websites.

At the heart of the action plan is an effort to link street vendors directly with factories, effectively circumventing middlemen and saving time and costs.

Wang said the legion of small-scale merchants on the site has managed to gain the upper hand in price negotiations, while manufacturers are more willing to mass-produce as the economy of scale serves to trim costs, thus creating a win-win situation.

"Data analytics also kicks in, giving traders a sneak peek of current consumer trends so that they no longer need to operate their business purely based on intuition, and they can avoid stockpiling," Wang said.

As such the platform is linking factory data with consumers through Tetao, or the special edition of Taobao Marketplace featuring budget items, and aims to incubate 10,000 sought-after products with monthly sales volume of 100,000 yuan ($15,560).

Another upgrade comes on the logistics front: 1688 provides door-to-door delivery services and vows to build more than 100 local warehouses to reduce costs in the dispatch of goods.

In a similar vein, e-commerce site Pinduoduo has rolled out a string of training sessions, lecturing traditional exporters on how to adapt their outbound business to fit local needs.

"It takes a few years and a lot of money to train our employees to understand how marketing works for domestic consumers. Thus we decided to work with e-commerce platforms to make up for the expertise gap," said Ren Mingxing, founder of Shanghai Meidu Textile Production.

This is part of a Shanghai municipal government-orchestrated event to connect over 1,000 export-driven enterprises with leading e-commerce platforms where they manage to promote goods to the domestic market, according to the Shanghai Commission of Commerce.

Pinduoduo is looking to introduce over 1,000 such companies to open stores on the site, according to co-founder Da Da.

Discounts are also steep. For instance, a 20-inch suitcase made of recyclable materials, which was priced at 1,580 yuan, is being offered for just 299 yuan online, bringing benefits to customers and valuable cash flow to enterprises, said Yang Yanfeng, a partner at Shanghai Haichen International Trade Co Ltd.