BUSINESS Export volume may fall 50% in manufacturing hub of Guangdong

Export volume may fall 50% in manufacturing hub of Guangdong 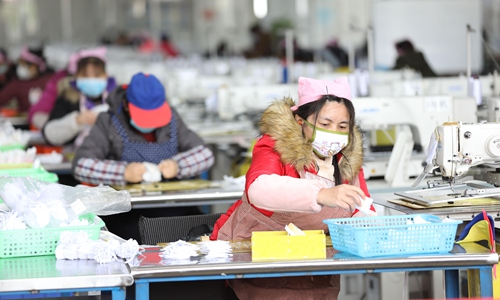 Workers start manufacturing at a shoe factory in China. Workers are required to wear masks and measure their body temperatures twice a day. (Photo: Chinese News)

Employment difficulties, logistical disruptions, and the ongoing spread of the coronavirus pandemic will continue to cast shadows on the world's footwear industry, and industry insiders predicted that trade volume may fall by 50 percent in South China's Guangdong Province, the largest shoe production hub in China.

"The resumption rate of Guangdong shoe factories is at 60 percent on average now," Zhang Wenfu, secretary-general of the Guangdong provincial committee on shoemaking standardization, told the Global Times, adding "the supply chain has not fully recovered." Meanwhile, a lack of new overseas orders has created uncertainties for the shoe producers in the region.

"There were some foreign trade orders before the Chinese New Year, but very few these days," Zhang said.

Guangdong accounts for half of the country's shoe exports, with East China's Fujian and Zhejiang provinces accounting for the rest.

"The profit of the shoemaking sector is not high. After the epidemic, the profit will drop by at least 30 percent and the export volume of Guangdong's shoe industry will decline by 50 percent," Zhang said.

In recent years, some brands, such as Nike and Adidas, have shifted their production to countries such as Vietnam where the production costs, labor costs, and environmental standards are comparatively low, said Zhang, adding that the impact of the virus outbreak might prompt some foreign trade orders to move abroad.

Lu Qinlai, general manager of Wenzhou Bomei Shoes Co, which only handles only foreign trade, told the Global Times that even if most of his employees have returned to work, the lack of foreign trade deals has made him worried.

Lu's company produces about 2 million pairs of shoes for export per year, with the total value reaching more than $10 million. Half of his clients are from Europe and the others are from the US.

However, due to the disruption of the supply chain and growing uncertainty of the outbreak overseas, there are few new orders coming from abroad these days.

Jinjiang, the city where Lu's factory is based, is renowned in Fujian for producing shoes. Yet, the pandemic has disrupted the city's plan to hold its biggest annual expo for foreign trade goods including shoes, which is now postponed and may even be canceled.

A manager surnamed Wu, from the Jinjiang Association for the Promotion of International Trade Expo, told the Global Times that the organization had been expecting 2,300 booths this April, around 750 for shoe producers.

"Our shoe industry relies on foreign trade, but at present, many domestic exhibitors are not sure whether they can participate or not, and foreign traders cannot come here," Wu said, adding that the group is now considering to host the fair online instead.

He Wenyi, executive director of the China Institute for Sports Value at Peking University, told the Global Times that the coronavirus outbreak may have an impact on Chinese shoe producers with some foreign deals shifting to other countries.

"Despite some disruptions around the world, China's advantages of shoemaking are still here in the whole industrial chain from raw materials to production techniques," he said, adding that up to 70 percent of the world's shoes are made in China.

"China has been the world's largest shoe producer for decades with mature production and supply chains in place that cannot be replaced," He said.

According to statistics from the China Leather Industry Association, China exported 9.54 billion pairs of shoes in 2019 - up 0.1 percent year-on-year, with an export value of $44.95 billion, growing by 1.1 percent. China's shoes exported to the US accounted for 16.8 percent of the total in volume and 25.3 percent in value, meaning the country is still the largest destination for China's footwear exports.