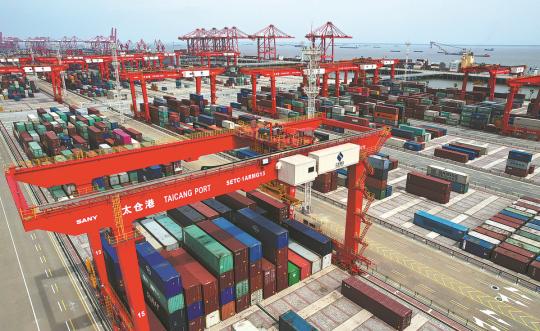 Medium-sized ports around Shanghai, including those at Taicang and Zhangjiagang in Jiangsu province, saw a surging volume of transshipment to Shanghai in March, since many neighboring cities adopted strict anti-COVID measures for truck drivers going to and coming from Shanghai due to the city's lockdown, said forwarders and Customs officials.

Even though Shanghai International Port Group, the operator of Shanghai Port, announced last week that its daily throughput had remained around 140,000 TEUs (twenty-foot equivalent units) in March, getting containers into the city has become a challenge for truck drivers serving the city as many neighboring cities restrict travel to and from Shanghai.

These cities, especially in Zhejiang and Jiangsu provinces, have been requiring truck drivers from Shanghai to have swab tests at expressway exits or even hunker down for 14-day quarantines in designated hotels.

To resolve the shortage of truck drivers and prevent logistical delays, Taicang Port, facilitated by Nanjing Customs, has been helping export-oriented companies in Suzhou, Jiangsu province, ship containers to ports in Shanghai via waterway transshipment. This has effectively ensured the smooth transportation of exports for domestic manufacturers, said Wei Wei, head of logistics management at Taicang Customs, a branch of Nanjing Customs.

The Taicang-Shanghai waterway transshipment service has transported a total of 59,000 TEUs, containing goods such as electronic products and auto parts, to Shanghai in March, soaring 68 percent on a yearly basis, according to Customs data.

Once clearances for such international cargo are completed by Taicang Customs, they can be shipped along the waterway in between four and six hours to Yangshan Port, Waigaoqiao Port and Wusong Port in Shanghai, said Zou Wei, customer service manager at Taicang-based Suzhou Modern Terminal Co Ltd.

Luo Jinsong, a manager at Taicang Port International Transportation Co Ltd, said many cities along the upper and middle reaches of the Yangtze River－such as Chongqing and Wuhan, Hubei province－also have opted to transfer their goods to Shanghai via Taicang. The company handled 2,000 TEUs in March, registering a record high.

Although waterways, railways and aviation transport can park, stop and land only at certain locations, their shipping capacities are significantly bigger compared to trucking.

They have played a reliable role in dealing with the epidemic, said Liu Dacheng, deputy director of the Internet Industry Research Institute of Tsinghua University in Beijing.

The phased lockdown triggered by the recent COVID-19 resurgence in Shanghai will remain for the time being, as authorities are using the time to verify and analyze Monday's mass testing results and transfer those infected, said the city government on Monday.