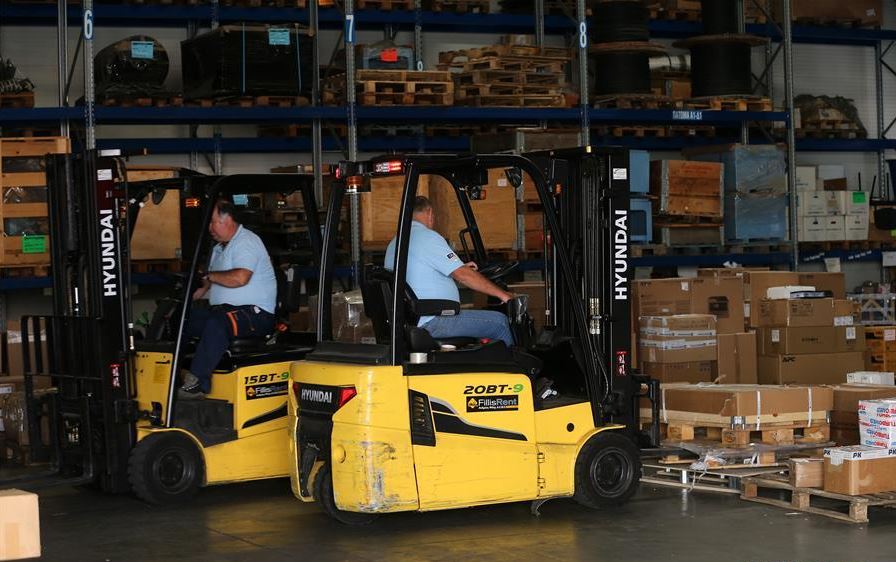 Workers forklift packaged industrial materials in a warehouse in Athens, Greece, on Aug. 21, 2018. Increased exports of goods and services held a key role in Greece's exit from the bailout programs after eight years, according to official data. (Photo: Xinhua)

Increased exports of goods and services held a key role in Greece's exit from the bailout programs after eight years, according to official data.

Although many industries were hit hard by recession and industrial units moved abroad to deal with tax hikes, Greece has potential for a dynamic comeback and should focus on "industry gain" to reverse the "industry drain", experts told Xinhua.

Greece's return to growth is attributed also to a rise in exports of goods and services, according to Greek Statistical Authority experts. By focusing on exports, Greek businesses tackled the sharp fall in domestic consumption, the experts explained in regular reports.

When the crisis broke out in late 2009, exports accounted to about 19 percent of Greece's GDP. By 2017 the share had climbed to 30 percent and the positive trend continues.

According to a recent National Bank of Greece survey the dynamic products that supported the ailing economy include basic commodities which had secured significant shares in international markets for years, such as aluminum, marble and olive oil, as well as quite new products in Greece's export portfolio, like yoghurt.

Greek exports grew strongly also in the first half of this year by 15.7 percent to 16.4 billion euros ($19 billion) compared to the same period in 2017, according to a Panhellenic Exporters Association report. In the same January-June period, imports stood at 27 billion euros.

Over taxation and the introduction of capital controls in the summer of 2015 were pinpointed as main factors obstructing further improvement by the Panhellenic Exporters Association.

"Capital controls limited business. A country with capital controls, as you can understand, loses also credibility abroad. Nevertheless, the private sector in our country managed to retain the good name we had created," he told Xinhua in a recent interview.

Although the indexes of industrial production and exports look good, the image is not entirely rosy.

"We are not selling our products at the prices we would like in order to have profit, but we export, because there is no domestic demand and we do not want to keep them on the shelves," he explained.

Korkidis suggested that the focus should shift also to sectors which can give more, like agricultural production.

"The industry has been hit hard. We all know by now that Greece cannot have heavy industry, but can have an industry with long history behind and know-how," he said.

"Many industrial units were transferred to other Balkan countries due to over taxation. Maybe it is time for their return, if the taxation rates for businesses decrease from the current 29 percent to 26 percent and then 20 percent within a couple of years. I believe that this is what should happen so that we can have an industry gain like we had the industry drain," he stressed.

"What we would like to see is every small import company developing into a small export company also," Korkidis told Xinhua.

Yorgos Kavvathas, President of the Hellenic Confederation of Professionals, Craftsmen and Merchants (GSEVEE) suggested also a national growth plan and emphasis on how to resolve the businesses' financing issues.

"A country with four systemic banks cannot move ahead to growth. She needs a Development bank of special purpose which will support those sectors of the economy which can become the steam engines that will pull forward the train of growth," he told Xinhua.

"What we need to do is to eventually draft a national strategic plan for growth which will determine the sectors that will be the drivers. And we do have such sectors," he stressed.

Constantinos Achladitis, CEO of Golden Cargo SA, a logistics and warehousing services company based at Piraeus port that is part of Greece's imports/exports supply chain, accommodating mainly the maritime sector, also referred to a positive climate of hope over the exit from bailouts, but also concern over pending issues.

"There is stability and an optimistic note from the second half of 2017, but still this has not reached the real economy," he told Xinhua.

Over taxation was a big issue, but a more flexible framework to support growth was also a prerequisite to move further, he said.

"The capability of Greek enterprises to become competitive in the international environment needs the lawmakers' support. The establishment of protectionism barriers still is hindering the Greek companies' development," Achladitis noted. (1 euro= $1.15)