BUSINESS Exports on all cylinders in Q3

Exports on all cylinders in Q3 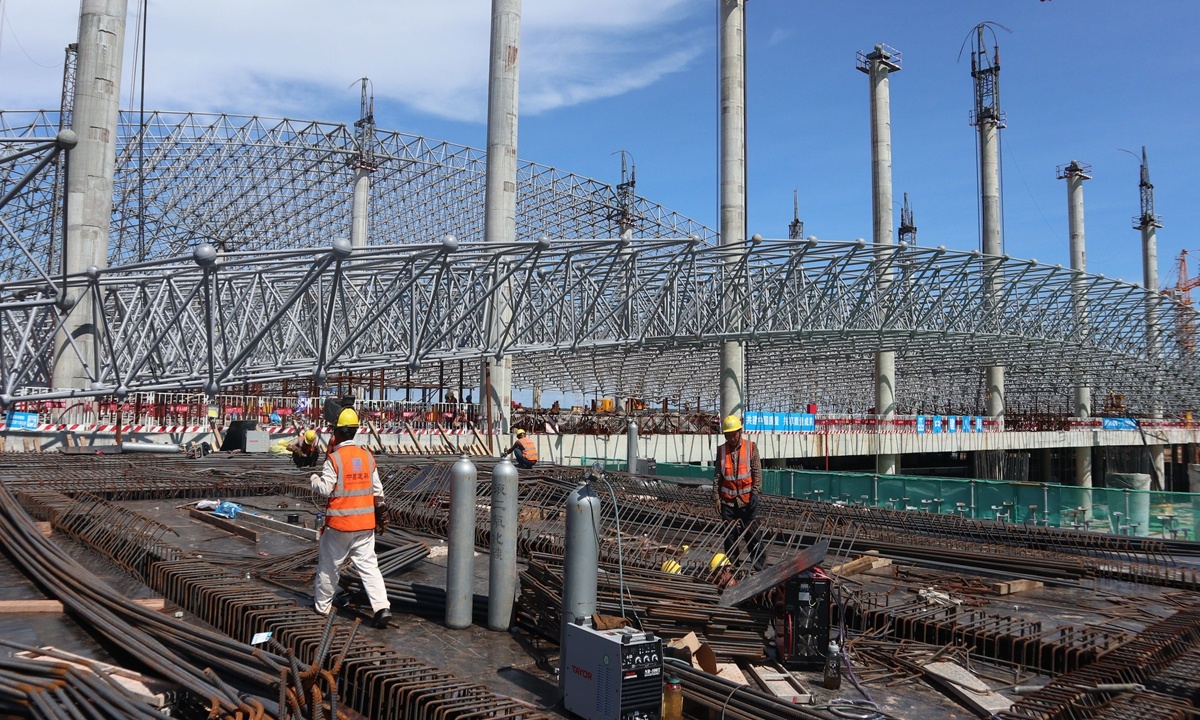 The main structure for the Zhanjiang International Airport in South China's Guangdong Province is finished. Construction will be completed by the end of November 2021 and the facility will open in March 2022. Photo: cnsphoto

The world's factory hummed "unexpected strongly" in the third quarter as China posted a record 10.2-percent increase in exports amid the spread of COVID-19 globally, with foreign demand warming up and domestic manufacturing activity getting back to normal.

Exports jumped 10.2 percent year-on-year to 5 trillion yuan ($742 billion) while imports were up 4.3 percent to 3.88 trillion yuan, the General Administration of Customs (GAC) said on Tuesday.

Exports grew for the sixth month in a row, as the third quarter saw record foreign trade volume, including exports and imports, while the overall foreign trade performance was "markedly better than expected," said Li Kuiwen, spokesperson for the GAC.

The expansion was supercharged by stronger exports of medical equipment, home appliances and consumer electronics. The exports of epidemic control materials such as medical equipment and drugs propped up total exports by 2.2 percentage points while the increase in consumer electronics commerce pushed up total exports by 1.1 percentage points.

The rapid pace of growth, one of the fastest among the world's major exporting nations, was in line with forecasts by analysts, consolidating views that China's third-quarter GDP growth could have surpassed 5 percent year-on-year.

According to Tian, the growth reflected a global supply gap, as other countries' production capacity contracted but their demand persisted, partially owing to overseas governments' policy stimulus. This generated opportunities for Chinese factories to make products for them.

Liu Xuezhi, a macroeconomics expert at the Bank of Communications, told the Global Times on Tuesday that one of the reasons for China's stronger export performance is that the Chinese manufacturing sector is able to scale up production quickly to produce what's necessary amid the COVID-19 pandemic, including medical equipment such as ventilators and consumer items, when millions of people are confined to their homes.

China Inc. also benefited greatly from its earlier resumption of work and production in the second quarter after the coronavirus was effectively controlled.

Lin Jiang, a professor of economics at Lingnan College of Sun Yat-sen University, said China's foreign trade performance for the quarter was better than expectations, but now it is time "for China to move on and compare its economic data with that of the pre-virus period rather than with the US or EU, whose economies are still crippled by the pandemic."

"The data showed that the world needs Chinese goods and Chinese exporters remain unchallengeable, despite the pressure brought by US' decoupling attempts and tariffs," Lin told the Global Times on Tuesday.

For the first nine months, China's total foreign trade expanded 0.7 percent year-on-year to 23.12 trillion yuan, landing in positive territory for the first time and recovering from a 6.4-percent deficit in the first quarter and continuing a consolidating trend that began in the second quarter.

"A fast expansion in exports plus a sudden widening of the trade surplus in the third quarter will provide an evident boost to China's third-quarter GDP growth, putting it the medium to high range," Liu told the Global Times.

Tian agreed, noting that foreign trade was likely the sector that contributed the most to China's GDP growth in the third quarter.

Looking at the fourth quarter, China's exporters will still face rising headwinds from possible worsening of the global pandemic during the coming winter season and slumping world demand, analysts said.

ASEAN has remained China's largest trading partner in the first three quarters, according to the GAC.