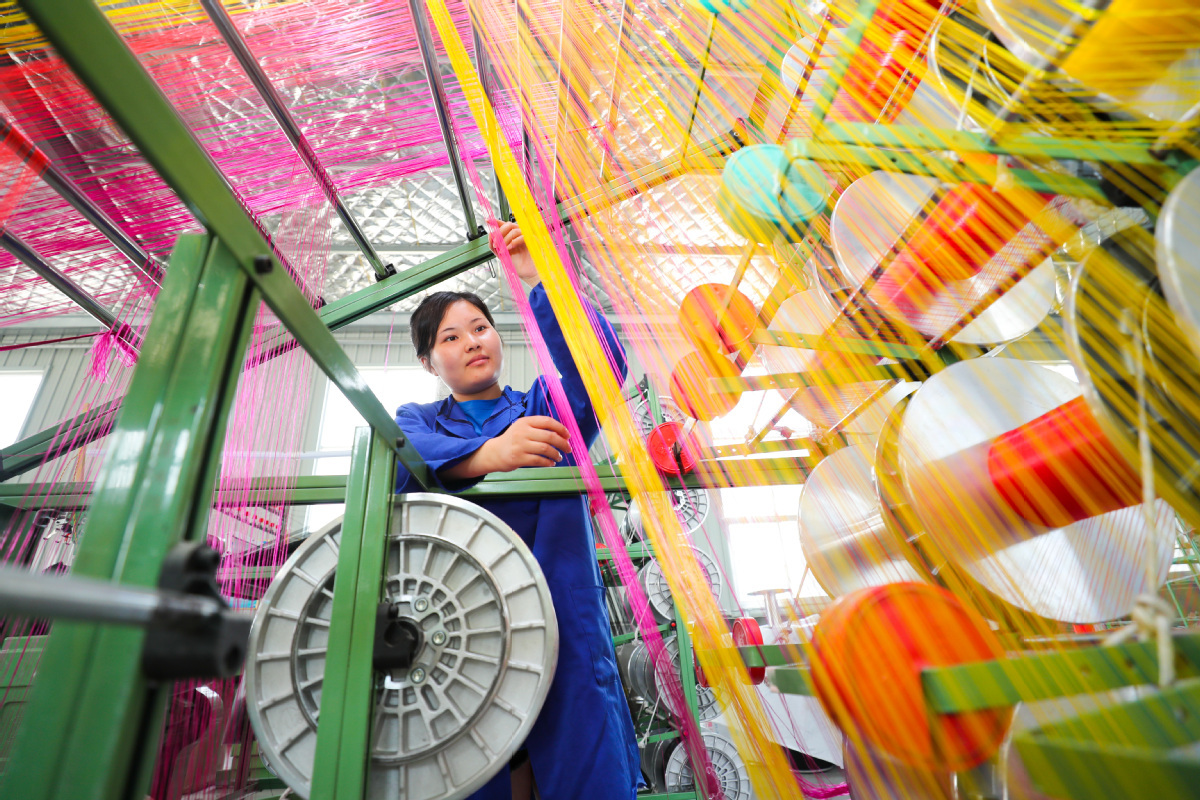 An employee works on the production line of a plastic product maker in Lianyungang, Jiangsu province. (Photo: Xinhua)

Though China's foreign trade stabilized during the second quarter, exporters will have to put in extra efforts to tap global markets and boost domestic consumption in the second half of this year to circumvent rising external pressure, experts said.

To minimize the influence of unilateralism and protectionism, it is important for China and its partners to seal deals, including the China-EU comprehensive bilateral investment treaty, the Regional Comprehensive Economic Partnership and the China-Japan-South Korea Free Trade Agreement as soon as possible to generate fresh momentum, said Bai Ming, a senior researcher at the Beijing-based China Academy of International Trade and Economic Cooperation.

Amid the complex and severe world economic situation, China must opt for a smooth functioning of the economic cycles of both the domestic and global markets based on the healthy performance of the domestic economy or a "dual circulation" development pattern that comprises the optimum exploitation of domestic market resources, and exchanges between the domestic and international markets, said Li Yiping, a professor at the School of Economics under the Renmin University of China in Beijing.

In addition to being the biggest trade partner of more than 120 countries and regions, China introduced a new policy in early July to support domestic manufacturers to make products on one production line, using the same standards and the same quality requirements for both foreign and domestic markets, to cut costs and achieve the transformation from exports to domestic sales.

This policy has been expanded to fields like general consumer goods and industrial goods, according to the Ministry of Commerce.

Xing Ziqiang, chief economist with the investment bank Morgan Stanley China, said uncertainties will continue to be a part of China's economic growth in the second half of the year. However, the overseas spending by Chinese consumers will largely flow into the domestic market, and its value may reach 1 trillion yuan ($142.84 billion) on an annualized basis. Such a trend will prompt Chinese exporters to scout for growth potential at home, largely to offset losses in overseas markets, said Xing.

Thanks to the recovering global market demand and Chinese exporters' surging orders from foreign clients last month, especially from member economies of the Association of Southeast Asian Nations and countries and regions related to the Belt and Road Initiative, China's foreign trade rose 5.1 percent on a yearly basis in June, with exports up 4.3 percent and imports by 6.2 percent, according to data released by the General Administration of Customs.

Although the COVID-19 has been destructive to the global economy, it has brought opportunities for regional economic restructuring and innovative activities, including accelerated growth of the digital economy and reshaping the forms of regional cooperation between China and the ASEAN, said Xu Ningning, executive president of the China-ASEAN Business Council.

Whether the ASEAN will remain China's largest trading partner for a long time depends on the market opening of both sides, as well as other factors, such as their complementary industrial structures, the conclusion of the RCEP talks, the development of Belt and Road Initiative, the economic recovery of the European Union, the United States and Japan, he said.

The ASEAN became China's biggest trading partner in the first half of this year, accounting for 14.7 percent of the nation's total foreign trade volume, amid upgraded free trade area protocol and supply chain cooperation, data from the General Administration of Customs showed.

The expansion was partly buoyed by growing farm product trade with ASEAN members under the upgraded protocol of the China-ASEAN Free Trade Area, which came into effect in October 2019, said Zhang Yongjun, a researcher at the Beijing-based China Center for International Economic Exchanges.

Zhang Xiaomei, the head of the Hubei branch of the China Council for the Promotion of International Trade, said countries should oppose protectionism and unreasonable trade barriers. Restrictions should be canceled, removed or clarified so as to help enterprises' export and safeguard the stability of global supply chain.