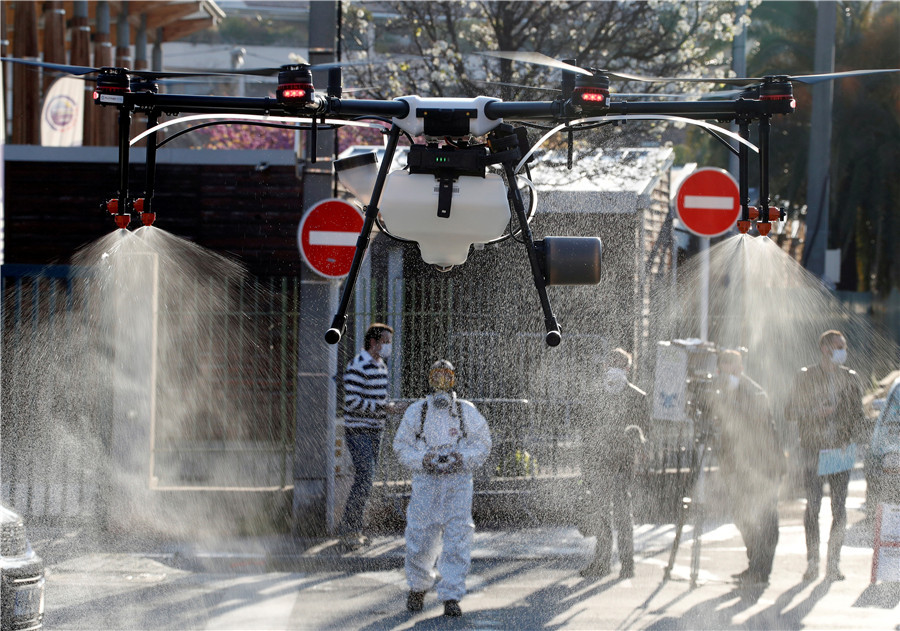 A disinfection squad uses a drone to spray disinfectant in the streets of Cannes, France, on Friday. (Photo: Agencies)

Chinese drone manufacturers are leveraging their technological prowess in helping other countries combat the novel coronavirus pandemic as infection rates and death tolls around the world continue to increase dramatically.

Shenzhen, Guangdong province-based DJI, the world's largest commercial drone manufacturer by market share, said its drones have been used in some European countries－such as France, Spain and Italy－to effectively enforce lockdowns or spray disinfectant in residential areas as part of a broader drive to contain the spread of the contagion.

Drone technology has emerged as a key tool to support front-line staff who are at high risk as they work to keep communities safe. Police in Nice, France, with the help of Drone06－a French company specialized in shooting aerial pictures and acquiring geospatial data－have deployed DJI's Mavic 2 Enterprise drones with its mounted loudspeaker to enforce lockdown measures, according to DJI.

The drones fly around the city center and areas prone to mass gatherings to broadcast standard precautions like keeping a safe distance or traveling only when purchasing necessities. Nice was the first French city to adopt such measures, paving the way for more cities to follow suit.

Spain is the first European country to use DJI's agricultural drones to spray disinfectant over large areas.

Both Italy and Spain also have used DJI's technology to monitor people's movements in public places to reduce infections during the ongoing battle against the deadly virus. DJI is also rolling out a set of initiatives to aid qualified police, health departments, the Red Cross and fire and rescue service agencies across Europe.

"Our experience working with public health and safety stakeholders in China since the early days of this pandemic has given us valuable insights and understanding that we can expand across the globe," said Romeo Durscher, DJI's senior director of public safety integration.

"As the fight against coronavirus moved to Europe, we have seen police using drones for similar tasks, from identifying large gatherings in Italy to warning beachgoers to go home in France," Durscher said.

Moreover, a police department in the US state of California is set to use drones equipped with loudspeakers and cameras to enforce coronavirus lockdown. It bought two $11,000 DJI drones, doubling the size of its small fleet, and rigged them with speakers and night vision cameras.

"Drones are playing a critical role in improving the efficiency of anti-pandemic activities and reducing the burden of frontline service personnel. This experience is beginning to be valued by European countries and the US," said Xie Tiandi, DJI's director of communications.

The company is mobilizing resources and providing equipment, technical training and after-sales services to pandemic-stricken countries around the world, Xie said.

Founded in 2006, DJI has a share of almost 70 percent of the consumer drone market worldwide, with Europe and North America its biggest customers. It is ramping up efforts to expand its product portfolio.

The UK government has decided to use Chinese drones for disinfection operations to fight the contagion's spread in the country. China's largest agricultural drone maker, XAG Co Ltd, is prepared to provide technical support to 48 British police drone teams and 100 similar operations in the country's fire service.

Its drones have also been applied in Italy to disinfect trash collection stations and parking lots in a bid to reduce infections. XAG has also teamed up with local authorities in South Korea and Vietnam to use drones to disinfect schools and government office areas, the company said.

"We are fully committed to supporting drone disinfection operations and pandemic prevention programs by governments and providing technical support to our overseas partners," said Justin Gong, co-founder and vice-president of the Guangzhou-based company.

"Depending on our accumulated experience in China, we can provide customized solutions for different scenarios, including schools, business districts, garbage disposal sites and hospitals," Gong added.

"In the past, drones were rarely used in the prevention and control of epidemics overseas. Now, more people are learning about the cutting-edge technologies and wide application scenarios, which will be beneficial for the rapid development of Chinese drone makers in the future," Yang said.

Drones have been used in China as key tools for responding to the COVID-19 outbreak via aerial disinfection, medical sample transport and delivery of other goods.

XAG allocated 5 million yuan ($708,000) for voluntary drone disinfection operations in China to fight the outbreak. The company said more than 2,600 agricultural drones have been donated to join disinfection work, covering an area of 902 million square meters across China since the COVID-19 outbreak.

DJI has deployed its agricultural-use drones in certain areas to spray disinfectants. Target areas include factories, residential areas, hospitals and waste treatment plants. Its drones have been used for measuring body temperatures from a distance in many communities and at road checkpoints.