Facing a referendum on money, Swiss traders look for hedges 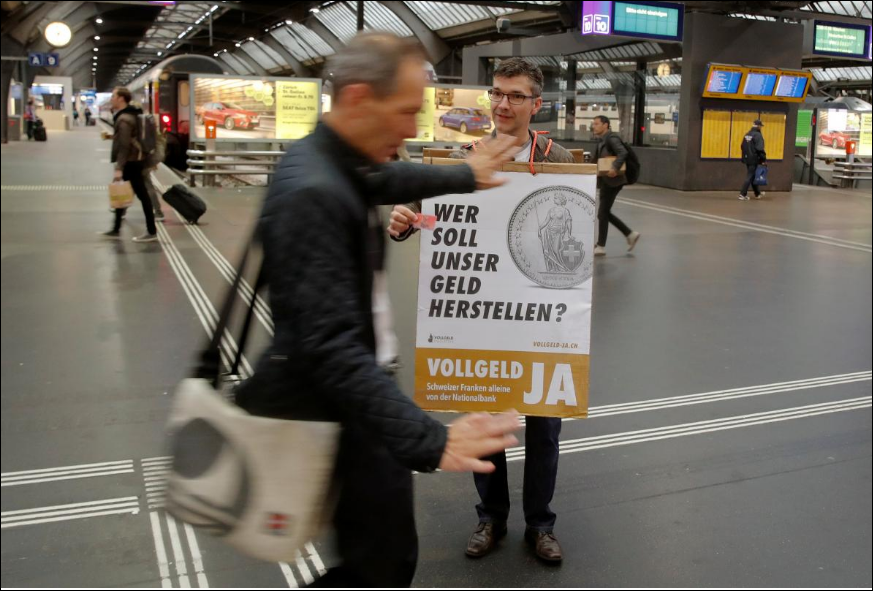 A member of the sovereign money initiative, a referendum campaign that would abolish traditional bank lending and allow only money created by the Swiss National Bank (SNB), offers flyers to travellers at the central railway station in Zurich, Switzerland May 3, 2018. The poster reads, "Who should produce our money? Sovereign money yes - Swiss francs from National Bank only". (Photo: Reuters)

Switzerland’s banking and monetary system is facing the possibility of a huge shake-up, and while the possibility looks remote, investors are buying up insurance against swings in the franc and the shares of the biggest Swiss lenders.

Swiss voters go to the polls on June 10 for a referendum on whether Switzerland should switch to a so-called sovereign money system. Approving the measure would make it much harder for commercial banks to extend credit, turning the Swiss National Bank into the only source of new money in Switzerland.

Opinion polls indicate the initiative, known as Vollgedd, won’t pass — only a third of voters currently back the plan branded “a dangerous cocktail” by SNB Governor Thomas Jordan. But with a tenth of voters still undecided, fears of a Brexit-style shock remain.

A “yes” vote would mean banks could lend only the money they administer in savings accounts, or what they get from relatively expensive money markets and the SNB, and it would crimp the SNB’s ability to intervene in currency markets.

That means a more volatile Swiss franc, probably a move higher for a currency that's viewed as a safe haven CHF=EBS. And it would hit the profits of banks like UBS (UBSG.S) and Credit Suisse (CSGN.S).

Backers of the referendum say it would make the banking system much safer and will reduce the occurrence of financial crises, by taking the power to create money away from banks.

“This kind of a banking system hasn’t been seen for a long time,” said Neil Weller, a currency strategist at JP Morgan Asset Management in London. “The referendum would also unleash a lot of uncertainty into Swiss assets, including equity and bonds.”

Some traders are preparing for the risk through tail-risk hedging strategies, insuring against market corrections via put options on stocks and the dollar/Swiss franc. A put option holder has the right to sell a specified amount of a security at a set price, benefiting if the security’s price falls.

Bank shares will probably fall if the referendum succeeds,increasing the value of the options. They’re still cheap, because they are mostly “out of the money” — their strike prices are well below current levels.

Option markets indicate some activity in out-of-the-money puts on UBS and Credit Suisse, expiring a couple of days after the referendum, according to Thomson Reuters data.

For example, the volume of puts on Credit Suisse expiring the Friday after the referendum are at a peak of 29,080 and 27,628 contracts for a strike price of about 25 to 30 percent below the cash market price, according to Thomson Reuters data.

UBS and Credit Suisse shares fell to multi-month lows in May. They were partly reacting to Italian political turmoil and worries over contagion across Europe’s banks, but Vollgedd would exacerbate their problems. To lend, they would have to get funds from money markets or borrow from the central bank.

That is a big deal in a country where the banking system is twice the size of the economy, according to ING strategists.

With market volatility still low, “this is the equivalent of buying a cheap insurance policy,” a sales trader at a U.S. bank said.

The biggest impact may be felt in currency markets, where the SNB intervenes regularly to hold down the value of the franc during global market stress. A “yes” vote “would greatly reduce the ability of the SNB to intervene ... and would lead to upward pressure on the franc,” JPM AM’s Weller said.

Accordingly, in currency derivative markets, two-week risk reversals CHF2WRR= that encompass the date of the event show a slight bias towards franc calls — expecting the Swiss currency to appreciate against the dollar.

Some bets are also against the currency EURCHF=EBS. Some large options are struck about 3 to 5 percent above current market levels on the euro/franc suggesting some punters may be betting the euro could rise initially if the vote goes through. SDRV

Italy’s political ructions have lifted the franc to around 1.1547 francs per euro and 0.99 francs to the dollar.

But before that, speculators had built record short positions, betting the SNB would stick to ultra-low interest rates longer than other central banks. Governor Jordan stressed this week that negative interest rates and interventions were suited to the country’s “fragile” currency markets.

Kaspar Hense, a portfolio manager at Bluebay Asset Management, said a “yes” vote would unleash a deflationary shock across the Swiss economy, which the central bank would have to fight.

“The franc should in its first reaction appreciate,” he said, because traders would ramp up bets that the SNB wouldn’t keep trying to weaken the franc.