Slicing through juicy cuts of pork belly alongside rarer delicacies of ox brain and sheep intestine, young butchers at a Frankfurt trade hall cast a suspicious eye towards the so-called fake meat products on display. 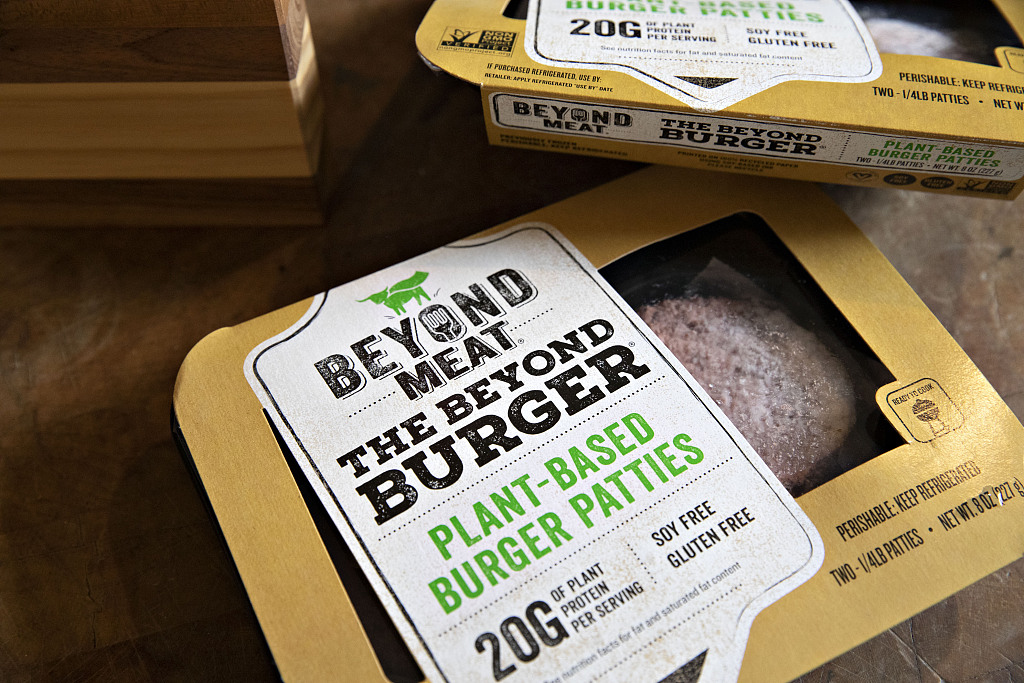 Packages of Beyond Meat Inc. plant-based burger patties are displayed for a photograph in Tiskilwa, Illinois, US, on Tuesday, April 23, 2019. (File photo: VCG)

Puzzlingly, for the butchers, the fake meat seems to be popular.

"As a butcher, it just can't be that we have to get into plastic!" said Paolo Desbois, an 18-year-old French butcher, referring disparagingly to the synthetic burgers, sausages and nuggets at the IFFA meat industry convention.

The concept that animals are meat -- and plants are not -- never used to challenged.

But increasingly plant-based protein products are trying to muscle in on the meat market.

Derived from sources like soy, peas or beans, the synthetic products are being manufactured without using animals.

And Desbois, who placed second in a young butchers competition at the convention, feels they undermine "the essence of the profession".

"It's just not possible to work with synthetic meat," he said.

"As a butcher, I'm for real meat. I think a lot of people would see it the same way," she declared.

Non "real" meat products have been making headlines lately, backed by investors with an appetite for supplying plant-based burgers and sausages to the trendy diet-conscious masses.

The celebrity-backed vegan burger start-up Beyond Meat, for example, made a sizzling Wall Street debut on May 3 when it more than doubled its share price.

Whether meat substitutes will ever be able to 100 percent replicate the taste, colour, smell and texture of a freshly chopped up slaughtered animal is debatable.

But some young butchers suspect their growing popularity will inevitably have a transformative effect on their trade.

"It's just shifting with the world and working with it rather than against it," said 19-year-old British butcher Lennon Callister.

Trade skills are "what sets butchers apart from supermarkets," he argued, but accepted consumers are starting to look at food differently.

Josja Haagsma from the Netherlands, who won the young butchers competition, agreed that synthetic meats were changing opinions.

"Maybe the next generation" will be the ones pressed to apply their knives and creativity to the task, Haagsma said.

Vegetables used to be considered a side dish, at best, for carnivore connoisseurs.

But in increasingly health conscious societies, where governments warn about the dangers of consuming too much red meat, plant-based products are widening in appeal.

Alongside ethical concerns over animals bred for the dinner table and green advocates urging the public to eat less meat to save the environment, the scope for more no-meat products is growing.

"It's very important that we think about it, that we consume less" but "good quality meat," said Haagsma.

"You can use organic meat and homegrown cows, and not the cows from the big companies," she said.

The growing numbers of people turning to plant-based meat alternatives include vegans, who shun all animal products, and flexitarians, who advocate moderate consumption of meat.

One sign of their expanding popularity? Silicon-valley company Impossible has linked up with Burger King to offer a plant-based version of its signature Whopper.

Nestle and Unilever are also aiming to cement their presence in the sector.

The move by big conglomerates into the sector has made young butchers note that changes are on the way.

"There'll be less of this mass-produced stuff, which is also really, really bad for the climate," said 23-year-old German Raphael Buschmann.

However, while recognising environment-conscious citizens are rethinking their diets, Buschmann predicted a limit to the industry changes.

Vegetarian sausages would not be added to his displays any time soon.