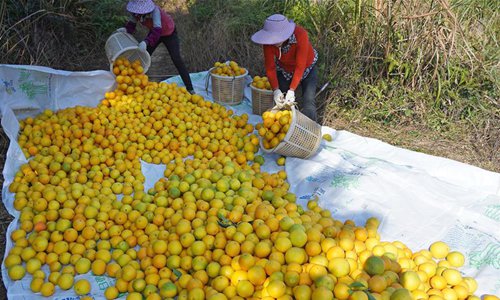 Chinese netizens on Friday criticized malicious customers of an online fruit shop for greed and lack of conscience after they exploited the shop's pricing mistake to earn profits which put the shop in danger of closing down.

The customers in question made their orders at the fruit shop on China's e-commerce platform taobao.com after a user of a video-sharing site spread the error with his followers and asked them to make orders.

The user had his account at the Bilibili or B-station shut down on Thursday and apologized after his behavior drew public ire. Taobao.com announced it would help the shop minimize its losses.

The fruit shop owners, two farmers, planned to sell their oranges at 26 yuan for 4.5 kilograms, but mistakenly priced the oranges for 26 yuan per 2.25 tons on their online shop. According to taobao.com, the families of the two farmers are entirely dependent on the online shop.

But tens of thousands of orders involving 7 million yuan were made overnight, and the two faced complaints when the shop shut down as it could not afford to make the deliveries.

Chinese netizens showed understanding and sympathy to the farmers while criticizing buyers for using their mistakes to make unjust profits.

"Your gain is based on sacrificing your morality and ignoring social fairness and the shop's survival, and we should let off people's honest mistake," one netizen said.

The shop's website was still open on Friday, but no products were displayed. A notice said that the shop owners showed gratitude to netizens across the country who supported them after their careless pricing mistake, and they would refund customers and resume operation with the help of taobao.com.

The incident also brought to light a group of "bonus hunters" specializing in exploiting honest mistakes of merchants to demand products with a value far higher than the payment amount and demanding compensation if the shops could not afford the deal. The Bilibili user in the incident involved was one such "bonus hunter" who had around 3,000 followers.

An online survey on Weibo showed that 70 percent of the 6,200 respondents believed such behavior is shameful and should be banned.