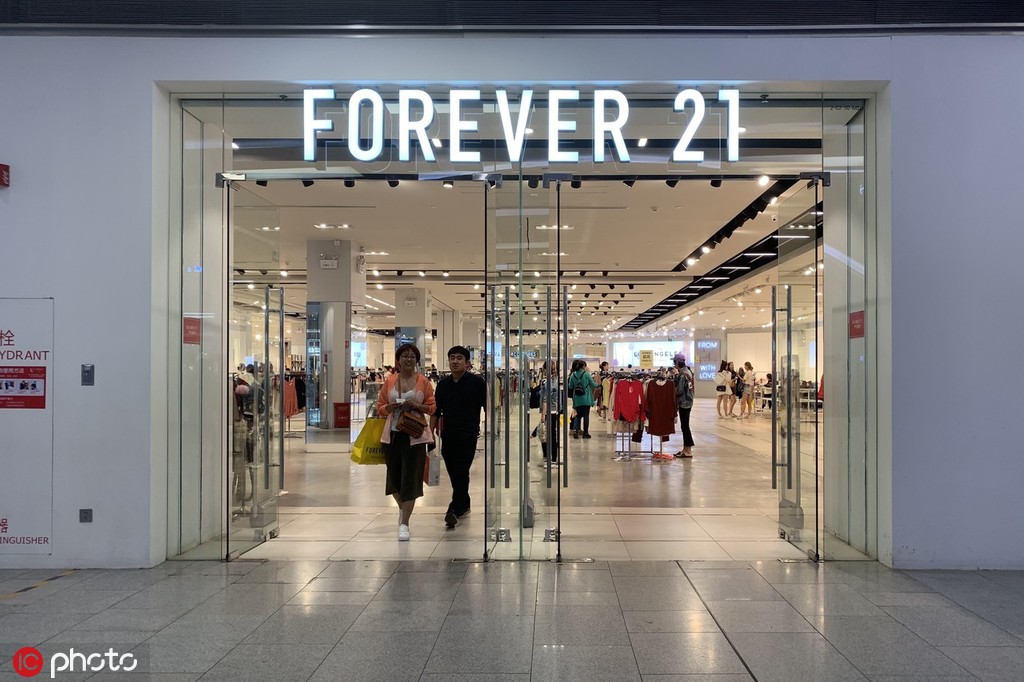 The 35-year-old US retailer Forever 21, which has said it will shut all of its stores in China, reflects the strain of fierce competition that fast fashion brands face in China.

Many foreign fast fashion brands have seen slowing growth in the Chinese market in recent years, in sharp contrast with earlier days when they could make some quick and easy money.

But now, they are struggling to meet Chinese consumers' increasing demand for quality goods, observers said.

Some Chinese consumers said the inferior quality of fast fashion, which is inexpensive and rapidly produced to meet the latest trends, and its generally Western designs do not tailor to Chinese preferences.

"Chinese consumers are becoming more rational, and they are not blindly following the crowd to imitate others," said Zhao Ping, deputy director of the Chinese Academy of International Trade and Economic Cooperation of the Ministry of Commerce.

"Before, some fast fashion brands imitated the designs of luxury brands and attracted some consumers. Now it's not like that anymore. But some brands didn't realize the problem," said Zhao.

"Most foreign fast fashion brands are not doing a good job in localization, as they are not familiar enough with the commercial culture and consumer mentality in China. They think that since fashion brands originated in developed countries, Chinese consumers will buy into them easily. That's not true now."

"Localization of multinational corporations must keep pace with the times," she said. "Otherwise, they will easily be abandoned by consumers."

Since launching its first store in Changshu, Jiangsu province, in 2008, Forever 21 opened 28 stores in China and closed eight. Facing the strong rivals that dominate the Chinese market, like Spanish company Zara, Sweden's H&M and Japan-based Uniqlo－each of which has opened more than 500 stores－Forever 21 has had a hard time.

The company has also continued to post losses in its international business. Since 2016, it has withdrawn from Belgium, the Netherlands, the United Kingdom, Germany, France, Japan and Australia, in addition to closing some stores in the United States.

Forever 21's Chinese website has shut down. Some of its brick-and-mortar stores have closed, and others are clearing out stock with significantly discounted prices. The brand mainly features US leisure styles and targets young female consumers. Most of its clothes carry price tags that are below $60.

In November, meanwhile, UK fashion chain Topshop said it would close its online flagship store on Tmall, a major e-commerce platform owned by Alibaba in China, after about five years of online operation.

Li Yun, a shopper in her 30s who lives in Beijing, said: "If I valued stylish designs, I may choose some trendier brands. If I valued quality more, I may choose Uniqlo. Some fast fashion brands don't really have any outstanding advantages other than their cheap prices."

More industrial players, including local fashion brands and some well-received internet online retailers, are joining the clothing sector, and the market pattern in China has changed.

"In fact, with a slowing global economy, the fast-expanding strategy of fast fashion brands is not in line with the current economic status," said Zhao, of the Chinese Academy of International Trade and Economic Cooperation. "Fast fashion brands should reposition themselves, improve the quality of their clothes and produce more durable products. Being green and sustainable should be the growth path."

Uniqlo, meanwhile, catered to the new consumption pattern of China's young consumers, who are willing to pay for quality rather than quantity. From 2014 to 2018, its market share climbed from 0.7 percent to 1.2 percent in the Chinese market.

From 2019 to 2023, the annual growth rate for apparel in China is expected to decline, whereas China will remain the top global market in terms of retail value, according to Euromonitor International.