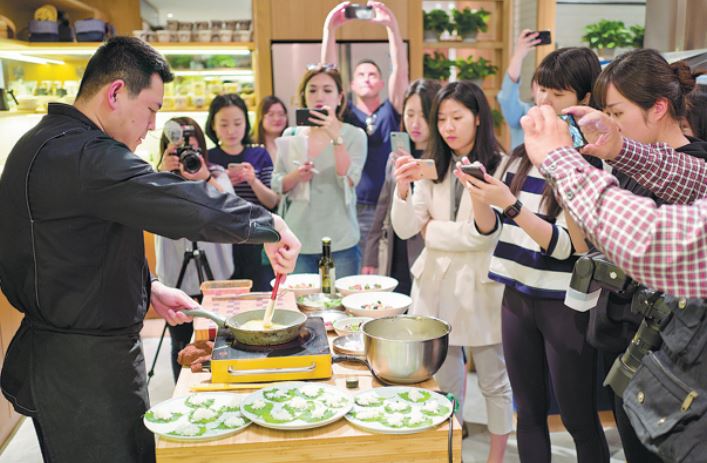 A chef cooks with egg-free mayonnaise, made from green peas by US company Just, during a tasting event in Shanghai in May. (Photo provided to China Daily)

From biscuits containing insect protein and egg-free mayonnaise to meal replacement powder and pork chops grown in a lab, as technology advances, foods that once only existed in science-fiction movies are appearing more frequently on dinner tables.

Chinese people are food lovers who take their meals seriously. But some people would happily trade the pleasure of culinary exploration for efficiency.

"In our fast-paced lives, working overtime and working over night have become normal. Not everyone has the luxury of being able to cook for themselves, and constantly ordering takeout food has health issues," said Shao Wei, founder of Ruofan, a food-tech company that develops powders and drinks to replace meals.

Shao, an engineer, thought if there wasn't time for a proper meal, it wasn't worth taking up too much time eating. Instead, absorbing nutrition and energy should be done as quickly and simply as possible.

Shao said what surprised him was that the major users of his products were not IT workers as he predicted, but government employees, police officers and doctors.

"Those communities usually can't eat their meals at regular times, or just eat instant noodles," he said, adding that these groups know what their bodies need and would rather sacrifice taste for efficiency and sufficiency. Currently, the product has about 10,000 users.

In May, the company's egg-free mayonnaise was launched in China's e-commerce channels as well as some supermarkets and restaurant chain Hunter Gatherer. Instead of using eggs, the company uses green peas to create the texture of eggs.

Josh Tetrick, the company's CEO, said its "vegetable egg" has a bright future in the Chinese market, which produces about 435 billion eggs a year.

As the population grows and urbanization speeds up, Tetrick said the demand for protein resources such as eggs will grow - while the amount of usable agricultural land is not keeping pace. By using green peas, land use, water and carbon emissions can be significantly reduced, Tetrick said.

Tetrick said China will become the top market for its product in the next five years - not only in terms of consumption potential, but also because of rising awareness among younger Chinese toward sustainability.

"Behind the rise of artificial protein is the change in the way people eat and consume, it is also a sign of the rise of alternative food," said Li Jian, a professor of the School of Food and Chemical Engineering at Beijing Technology and Business University. "Whether and how much consumers can accept such artificial protein and how much it will cost are key if such technology can secure future market."

Li Mingcheng, a cafe owner in Ningbo, Zhejiang province, who tried a sample of Just's mayonnaise, said the idea was attractive.

"It was awesome - not so much taste-wise, it tastes like normal mayonnaise, but the whole concept," he said. "I'm always into odd things and love to try them. If one day we can grow meat in a tank, I would definitely try it."