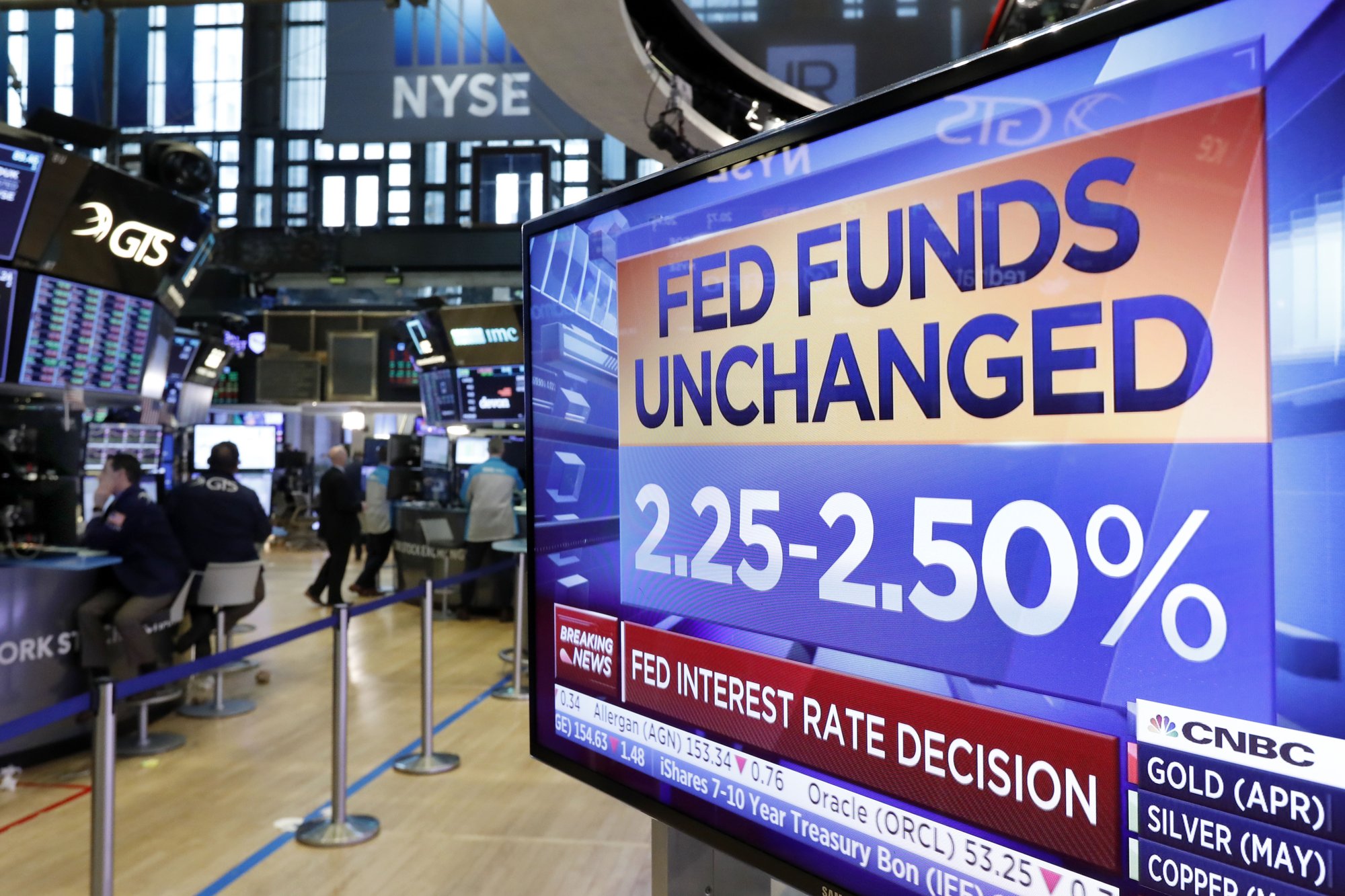 A screen on the floor of the New York Stock Exchange shows the rate decision of the Federal Reserve, Wednesday, March 20, 2019. (Photo: AP)

Banks led US stocks mostly lower Wednesday after a brief rally sparked by the Federal Reserve’s latest policy update faded. The real action centered in the bond market, where prices rose sharply, pulling Treasury yields down to the lowest levels they’ve seen in more than a year.

The central bank said it expects no interest rate increases this year and issued a dimmer outlook on the US economy.

Yields have been falling steadily since November, as worries rose about a slowing global economy and traders subsequently made moves in anticipation of a more patient Fed.

The Fed’s decision to put rate increases on hold is a marked change from three months ago, when the central bank projected two rate hikes in 2019. The move comes as Fed officials project that the US economy will grow more slowly this year and in 2020, a change from the panel’s projections just three months ago.

The central bank also said it will stop shrinking its bond portfolio in September, a step that would help hold down long-term interest rates.

“Powell’s suggestion that the Fed is on hold this year is important,” she said. “The question for the market remains whether or not the four rate hikes from last year and the unwinding of the balance sheet at the same time could be continuing, even now, to tighten financial conditions.”

It was only last autumn that interest rates were on the rise and rattling investors, who worried that an overly aggressive Fed would keep raising rates and choke off growth in the face of a slowing global economy. The Fed increased rates four times last year and three times in 2017.

Besides encouraging more borrowing and economic growth, lower interest rates can make stocks look more attractive to investors, at least when compared with the lower amount of interest that bonds are paying.

On the losing end, though, are US banks, whose profits can take a hit if the gap between short- and long-term interest rates narrows. Financial stocks in the S&P 500 fell 2.1 percent for the largest loss among the 11 sectors that make up the index. Bank of America lost 3.4 percent.

Administration officials are set to visit China for more negotiations late next week. Trump said the talks are “coming along nicely.”

Wall Street is hoping for a resolution to the damaging trade war between the world’s largest economies, which has made goods more costly for companies and consumers.

Despite Wednesday’s downbeat finish, the market is still off to a roaring start to the year. The S&P 500 index is up 12.7 percent so far in 2019. That’s better than the full-year gains for the benchmark index in four of the past five years.

News of tighter supplies of oil and continued production cuts helped to briefly push the price of benchmark US crude oil above $60 a barrel. It hadn’t closed above that price since November. It fell back slightly in afternoon trading, finishing with a gain of 1.4 percent to $59.83 a barrel.

The rise came after the US government reported that supplies of oil fell 9.6 percent last week and news that OPEC plans on maintaining deep production cuts.