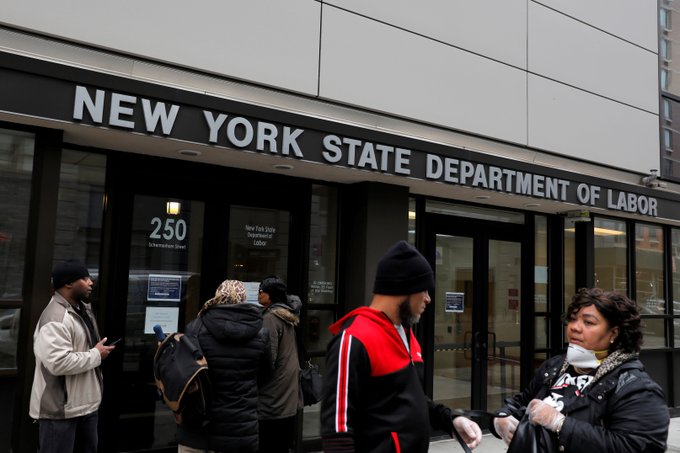 WASHINGTON, April 5 (Xinhua) -- While a recent study shows that U.S. unemployment rate could jump to 32 percent due to the spread of COVID-19, the U.S. job market was not in "free fall", a senior U.S. Federal Reserve official said on Sunday.

"I would push back against the idea of the economy or the job market being in free fall," James Bullard, president of the Federal Reserve Bank of St. Louis, said in the "Face the Nation" program on CBS.

"We're asking people to stay home to invest in national health, and we're asking them to use the unemployment insurance program in order to get the transfers they need to be able to pay bills while they're at home, while they're not able to work because health authorities are trying to get the virus under control," he said.

Bullard's comments came after a study from the Federal Reserve Bank of St. Louis estimated in late March that the coronavirus outbreak could cost 47 million American jobs in the second quarter, bringing the unemployment rate to 32 percent.

"Our estimates, which are available at our blog, St. Louis Fed on the economy blog, suggest the unemployment rate could go anywhere between 10 percent and 42 percent," Bullard said, adding the projected 32 percent figure is "a compromise in the middle."

The U.S. Labor Department reported on Friday that U.S. employers cut 701,000 jobs in March and the unemployment rate soared to 4.4 percent.

The latest data, however, does not reflect many coronavirus-related business and school closures that occurred in the second half of the month, as the monthly survey is conducted in the middle of the month.

As the COVID-19 pandemic continues to ripple across the country, experts believe that the labor market is going to see double-digit unemployment rate in the near future, with tens of millions of Americans losing their jobs.

Diane Swonk, chief economist at Grant Thornton, a major accounting firm, wrote in a blog that "the drop in payrolls in March was unprecedented for the start of a recession and will get more than 20 times worse in April."

"Unemployment will soar into the double digits, while participation plummets," Swonk said. "There is no scale to measure the misery associated with COVID-19 on all fronts."

The United States reported more than 337,000 COVID-19 cases and over 9,600 deaths as of Sunday evening, according to the Center for Systems Science and Engineering at Johns Hopkins University.