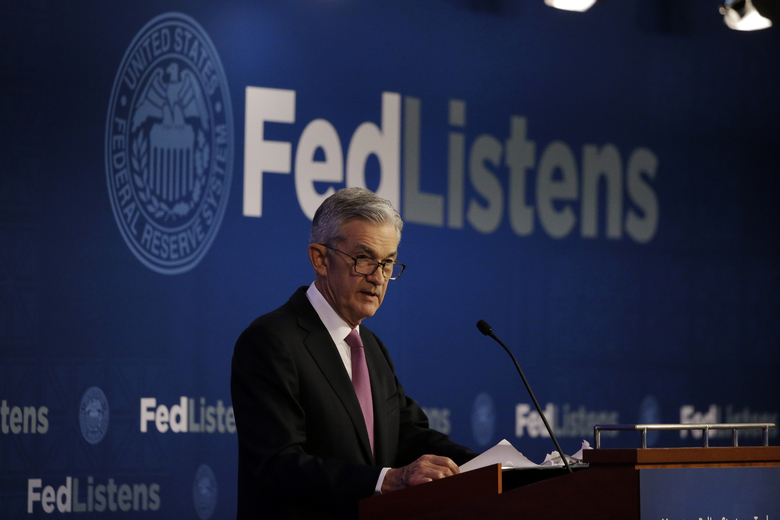 In this June 4, 2019, file photo Federal Reserve Chairman Jerome Powell speaks at a conference involving its review of its interest-rate policy strategy and communications in Chicago. (File photo: AP)

Eleven years since the last global financial crisis in 2008, central banks around the world are once again being pushed to the brink of opening the monetary floodgates.

During his testimony in front of the Committee on Financial Service on July 10, US Federal Reserve Chairman Jerome Powell said the "growth in business investment seemed to have slowed notably" due to uncertainties around the economic outlook. The Fed should "act as appropriate" to maintain the current economic expansion.

According to Powell, inflation has been below the 2 percent benchmark, which Federal Open Market Committee (FOMC) uses as a gauge to decide whether to cut rates or not. "Many FOMC participants believe a more accommodative monetary policy had strengthened," he said.

Powell's speech has confirmed an interest rate cut might be on the cards. After the speech, the index futures of the US stock market rallied to erase previous losses. The Dow Jones Industrial Average surged over 100 points to an all-time high.

In fact, before Powell's testimony, the Fed signaled an interest rate cut during the meeting in June, to which the market reacted positively. As the CME Group's FedWatch tool indicates, there is a 100 percent probability of a rate cut.

As a bellwether for the global economy, the US is fueling expectations of a rate cut, which will likely prompt global central banks to inject liquidities into the markets. Major contributing factors are that global economies, including the US, appear to be sluggish. Morgan Stanley has warned of a global economic and stock market downturn. Worldwide, manufacturing indexes have deteriorated. Bond yield curves are trending down, which shows worsened economic prospects and increased demand for safe haven assets.

Pessimistic sentiment on future economies is weighing on European countries' policymaking. The investor sentiment index of the Sentix research group for the eurozone fell to negative 5.8 in July compared to the negative 3.3 in the previous month. This number is far from the expectation of 0.1.

While China and the US have reached a trade truce and resumed trade talks, confidence among European investors appears to have worsened. It reveals that the market has lost hope for improved business and trade prospects, and this pessimism is significant enough to influence European countries' monetary policy.

Policymakers at the European Central Bank (ECB) are considering whether to relaunch the 2.6 trillion euro ($2.92 trillion) bond-buying scheme. ECB President Mario Draghi said in June that if inflation does not pick up, the ECB will adopt more monetary stimulus.

Amid the pressure from a global economic recession, central banks in certain countries can no longer be assured of keeping their independence. Heads of central banks have become the adherents of political leaders. The only thing left to do is to release more liquidity to the market. The world financial market will become a boom created by a bubble.

Though it signifies huge problems in the long run and drastic economic crisis, monetary easing has become the go-to policy tool of global central banks.

Monetary easing worldwide is inevitable. What will be the Chinese central bank's move? There are not many options for the People's Bank of China (PBC). Some believe the PBC will follow suit after the Fed cuts interest rate.

However, whether to lift the floodgates is not important in the current situation. For one, the effects of monetary easing, either negative or positive, are diminishing. No matter which stand the PBC takes, it might be hard to go against the global trend of monetary easing.

The prospect of a global recession has cast a shadow on the world economy. Central banks are on the verge of reopening the monetary floodgates after the financial crisis. Though the new round of monetary easing may inflate a massive bubble which could be poisonous, there are few alternatives for central banks worldwide.