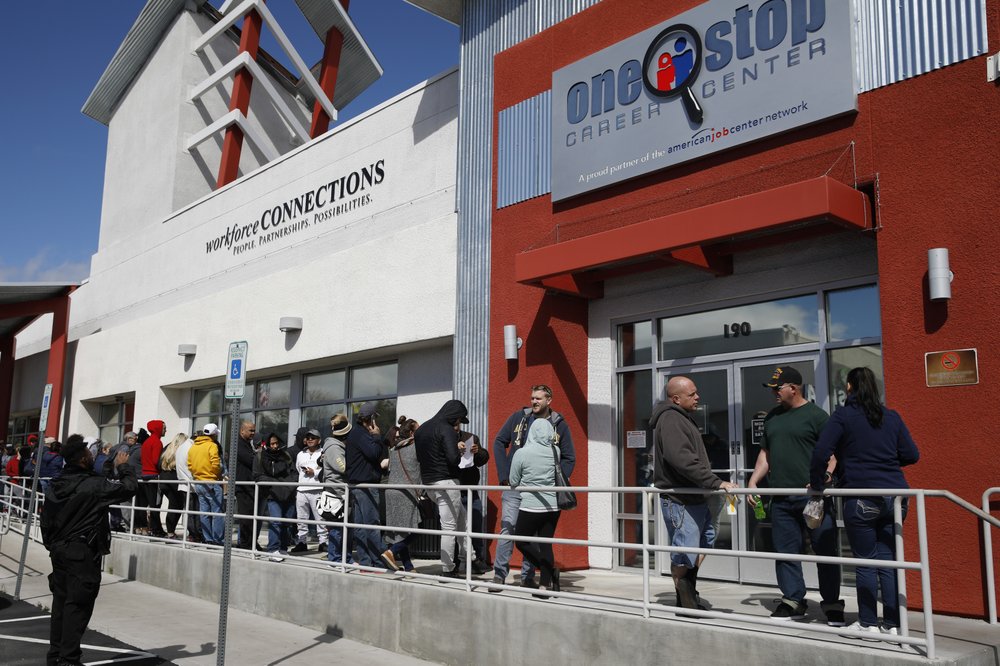 In this March 17, 2020 file photo, people wait in line for help with unemployment benefits at the One-Stop Career Center in Las Vegas. (Photo: AP)

WASHINGTON, April 15 (Xinhua) -- Economic activity "contracted sharply and abruptly" across all regions in the United States as a result of the COVID-19 pandemic, the Federal Reserve said on Wednesday.

"The hardest-hit industries - because of social distancing measures and mandated closures - were leisure and hospitality, and retail aside from essential goods," the Fed said in its latest survey on economic conditions, known as the Beige Book, based on information collected from its 12 regional reserve banks before April 6.

"All Districts reported highly uncertain outlooks among business contacts, with most expecting conditions to worsen in the next several months," the Fed said.

The survey showed that employment declined in all districts as the COVID-19 pandemic affected firms in many sectors.

"Employment cuts were most severe in the retail and leisure and hospitality sectors, where most Districts reported widespread mandatory closures and steep falloffs in demand," the survey said, adding severe job cuts were also widespread in the manufacturing and energy sectors.

"Contacts in several Districts noted they were cutting employment via temporary layoffs and furloughs that they hoped to reverse once business activity resumes. The near-term outlook was for more job cuts in coming months," the survey said.

The survey noted that no district reported upward wage pressures, with most citing "general wage softening and salary cuts" except for high-demand sectors such as grocery stores.

"These trends were seen as reflecting weaker demand for many goods and services in the wake of the COVID-19 pandemic," the survey said.

The survey came after the Commerce Department reported earlier Wednesday that U.S. retail sales plunged in March by the most on record as the COVID-19 pandemic is starting to take a big toll on the U.S. economy.

The US economy is expected to contract by 5.9 percent this year, according to the World Economic Outlook (WEO) report released by the International Monetary Fund (IMF) on Tuesday.