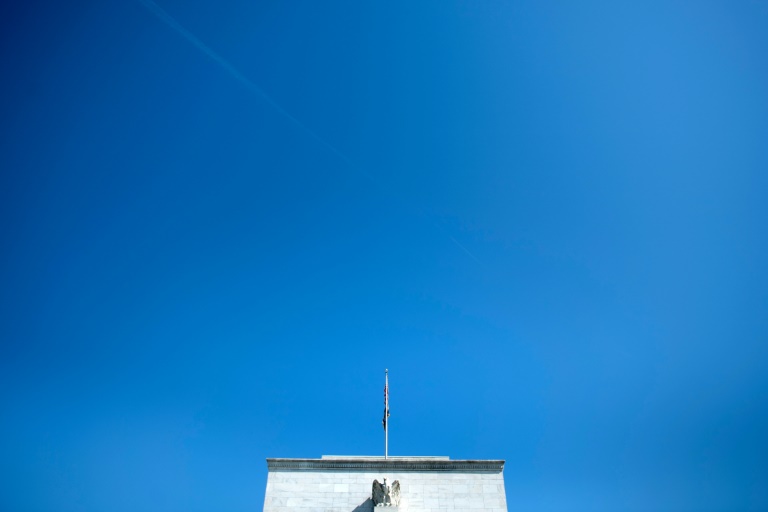 "Most participants" at the meeting agreed that if the economy continued to perform as expected "it would likely soon be appropriate for the committee to take another step," the Federal Reseve minutes from a meeting May 23, 2018 said (Photo: AFP)

US central bankers are likely to raise the key interest rate "soon," the Federal Reserve said Wednesday, a clear signal of a rate hike coming next month, as financial markets expect.

Fed officials cited the strength of the economy, and solid hiring trends, as well as the fact inflation had inched higher at long last.

However, the Fed will continue to move only gradually, even if inflation rises "modestly" above its two percent target -- as long as that increase is only "temporary" -- according to the minutes of the May 1-2 meeting of the policy-setting Federal Open Market Committee.

"Most participants" at the meeting agreed that if the economy continued to perform as expected "it would likely soon be appropriate for the committee to take another step," the minutes said.

The Fed last raised the benchmark federal funds rate in March, the sixth increase since December 2015, to a range of 1.5-1.75 percent.

It is expected to hike at least twice more this year but markets have been watching closely for signs the FOMC might be more aggressive in combatting inflation, which has finally picked up to about two percent after languishing for months well below that level.

Kathy Bostjancic of Oxford Economics is among those expecting three more rate hikes this year.

She said the minutes revealed "as expected that Fed officials overall are more optimistic about the near-term trajectory of the economy."

While more economists agree with Bostjancic that three more hikes are likely, the Fed's median forecast was for two more -- although it was very close.

And the minutes said there were "a range of views" among FOMC participants about how many more times the Fed would have to raise interest rates.

A key factor will be how prices and wages behave, but the minutes tamped down concerns the Fed would react aggressively if inflation nudges above the two percent target.

The minutes confirm the widespread interpretation of the May 2 statement that twice highlighted the fact the Fed's inflation target is "symmetric" -- meaning the actual rate can be a little above or below.

Officials noted that even though the rate had at long last reached two percent, it was "premature to conclude" that inflation would remain at the target level, given that prices had remained stubbornly subdued in recent years.

And although some said inflation was likely to "modestly overshoot" the target, "a temporary period of inflation modestly above two percent would be consistent with the committee's symmetric inflation objective," the minutes said.

In fact, a period a bit above two percent "could be helpful" in solidifying expectations that some price increases are on the way -- a process central bankers call "anchoring" inflation expectations.

That is important in monetary policy since expectations that prices will fall can sap economic activity.

Chris Low of FTN Financial said despite some difference of opinion on the trajectory of prices, "no one is concerned about a significant or lasting overshoot."

While they generally expect "above-trend economic growth," Fed officials noted "a number of risks and uncertainties" about the outlook.

That includes labor shortages that could constrain some industries and pressure wages and prices higher, as well President Donald Trump's trade policies.

While the minutes noted that the impact of trade policies would depend on US actions and the reaction of trading partners, "the uncertainty surrounding trade issues could damp business sentiment and spending."

The Fed has mentioned trade uncertainty several times in recent statements, given the potential for undermining business investment as Trump officials negotiate with China to head off a possible trade war.

Trump has imposed steep tariffs on steel and aluminum and the Fed noted rising costs for those and other inputs for US businesses, as well as the potential for higher Chinese tariffs on US agricultural goods, to "hurt US competitiveness."

In addition, rising oil prices, if they remain high, could fuel US price increases directly, the Fed said.

Wall Street, which greeted the news warmly, closed modestly higher with the tech-heavy Nasdaq leading the way with a gain of 0.6 percent.