FedEx may temporarily relocate aircrew and families out of Hong Kong 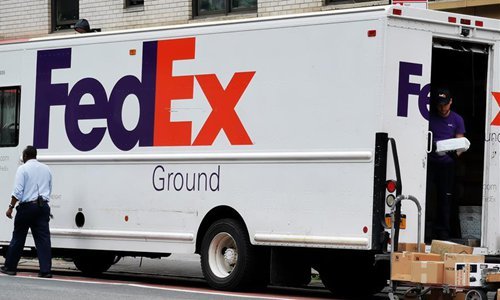 FedEx told GT that they may have a temporary modification of their HK base, citing the HK government considering new temporary measures requiring crewmembers to quarantine upon return to the island.

The company did not explain where the next base will be, but SCMP reported that it could be San Francisco.

We are aware the Hong Kong government is considering new temporary measures requiring crewmembers to quarantine upon return to Hong Kong, and we are developing plans to ensure compliance with the new requirements in a manner that also prioritizes the safety and well-being of our team members and the communities we serve, according to a note sent to the Global Times on Thursday, adding these steps may include a temporary modification of their Hong Kong base.

FedEx's Asia-Pacific hub is located at Guangzhou Airport, but it has daily flights connecting Hong Kong and cities such as Paris, Liege, Osaka, Memphis, and Taipei. It also is a major shareholder in the Asia Airfreight Terminal at Hong Kong International Airport (HKIA).

The Hong Kong government announced a further tightening of epidemic prevention measures, stating that from December 25, those who have stayed in places outside China on the day of arrival at Hong Kong or during the 21 days before that day have to undergo compulsory quarantine for 21 days in designated quarantine hotels.

Airport Authority Hong Kong announced the 2020 air traffic figures, saying due to the impact of COVID-19, the HKIA handled a total of 8.8 million passengers and 160,655 flights in 2020, which represent year-on-year decreases of 87.7percent and 61.7 percent, respectively.

However, total cargo throughput at HKIA in 2020 remained relatively stable at 4.5 million tons, a year-on-year decline of 7.0 percent. The airport handled 68,660 cargo flights during the year, an 18.3 percent increase compared to 2019.