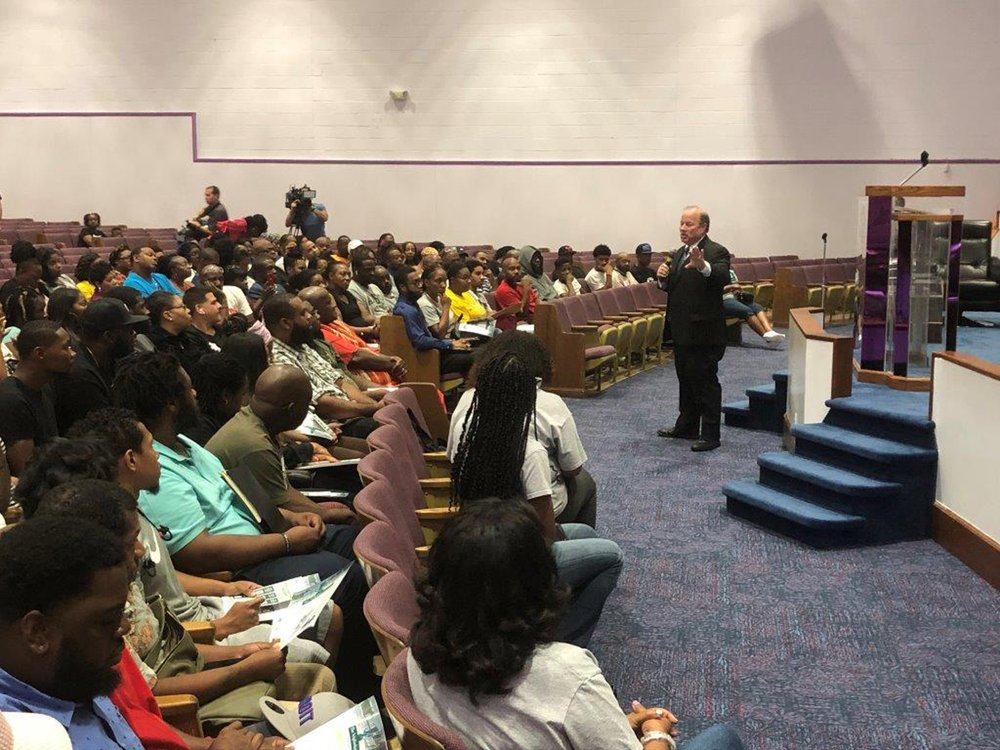 Detroit Mayor Mike Duggan speaks with Detroit residents during a job readiness event where they pre-registered to apply for jobs at a coming Fiat Chrysler assembly plant on the eastside and another nearby facility operated by the automaker, August 6, 2019. (Photo: AP)

Both are among the thousands of people who are looking for jobs with Fiat Chrysler under a city program that gives Detroit’s residents first crack at the application process. It’s part of a $108 million land development deal between an automaker that’s building a massive new plant and a city where the unemployment rate is more than twice the national average.

Detroit officials hope the deal with Fiat Chrysler will mean residents have a better shot at good-paying jobs with the automaker, although Fiat Chrysler is obligated only to consider Detroit residents for the work before opening up the jobs to others. Fiat Chrysler is getting land and tax breaks to build in Detroit.

“I sat with FCA (Fiat Chrysler) and I said this: ‘I’m going to give you want you want,’” Mayor Mike Duggan said. “We clear the land and give it to them. I want a window where Detroiters apply for the jobs first. No one in this country has ever got the preference.”

Many cities have workforce development programs to prepare people for jobs and make them aware of available employment, but Detroit’s requirements that residents receive priority in job interviews and the application registration process are unique, said Tamara Atkinson, chief executive for the regional nonprofit Workforce Solutions Capital Area Workforce Board in Austin, Texas.

“I have not come across another city that is as intentional in how Detroit is using city incentives to prioritize a local hire campaign,” Atkinson said.

Detroit has made gains since its 2014 exit from the largest municipal bankruptcy in history, and its population seems to have stabilized at around 680,000 — less than half of the 1.8 million who lived there in the 1950s.

Duggan wants those who stuck it out during Detroit’s lean years to stay. More than 24,000 residents have created accounts on the city’s Detroit at Work website and registered for job readiness events tied to the Fiat Chrysler openings. The automaker expects to hire about 4,900 mostly production jobs at the new plant and a nearby facility, with pay starting at just over $17 per hour. Laid-off and temporary Fiat Chrysler workers will get to apply first, then Detroit residents have a 30-day window before the automaker starts taking applications from others.

“What we want is for people to own homes and raise families in this city,” Duggan said. “If you’re making $60,000 you can get a nice house in the city of Detroit.”

Davis, 49, who has worked in property management for 25 years, said the $220 she spends each month on health insurance takes a big chunk out of what she earns. Landing a job at Fiat Chrysler would fill the gap, she said.

“It’s a very important opportunity for the benefits. I don’t plan on quitting my other job,” Davis added.

Pleasant, 22, who has two young daughters to support and quit working as a pizza shop manager when his hours were cut.

“When they said they were allowing Detroiters to apply first, I jumped at it,” Pleasant said. “A job is a job. You have to do what you have to do to make a living.”

Fiat Chrysler has undergone its own recovery since the federal government’s $80 million bailout of the U.S. auto industry. Italian automaker Fiat took over Chrysler after the U.S. automaker filed for bankruptcy in 2009. It expects to spend $1.6 billion building the new plant in Motor City.

Meanwhile, the city and state will split land acquisition and preparation costs. The city also agreed to give Fiat Chrysler about $12.1 million in property tax abatements.

The company did not respond to requests for comment about its hiring plans. However, when city leaders approved the land deal in May, Mark Stewart, chief operating officer for Fiat Chrysler North America, said: “We’re putting Michigan and Detroit first. This is our home. We’re very proud.”

The deal likely will put some Detroit residents into jobs they otherwise would not get, said Michigan State University economist Charles Ballard. But he cautioned that the unemployed rate may change only a little, as many unemployed people may not have the necessary skills to work in an auto industry that’s been changed by technology.

“This is true of unemployed all across the country,” Ballard said. “The group that’s more likely to be unemployed is the group that has less education and less skill.”

The city’s unemployment rate was 8.8% in May, according to Michigan’s Department of Technology, Management and Budget, compared with 4.2% statewide and 3.6% nationwide.

“We know those jobs are pathways to middle-class lives and we know that elected officials will continue to offer these incentives because they need to claim credit,” Ted De Barbieri, associate law professor at Albany Law School in New York. “Whether a project was going to move forward anyway or if it doesn’t come, an elected official can say, ‘I did all I can do.’ It shows the importance of employers to local elected officials. We know that constituents need jobs.”