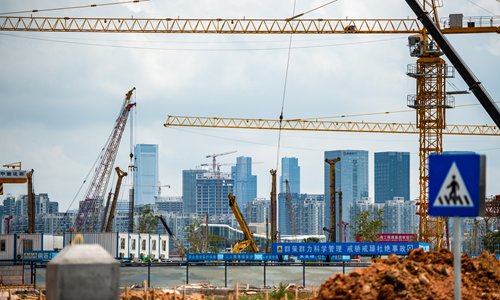 More than 80 Chinese developers on Monday joined fierce bidding for five residential sites in Shenzhen, South China's Guangdong Province, which industry insiders called it a landmark auction for the domestic manufacturing hub with a population of 13 million. Analysts said the auction sent signals of stabilized growth to local real estate markets, which feature scarce land supplies and strict industry restrictions. The auction attracted domestic mega developers such as Vanke, Poly and Huarun as well as local real estate companies like China Merchants Shekou Industrial Zone Holdings Co, news site nbd.com.cn reported on Monday.The deposits paid by the real estate enterprises reached 110 billion yuan ($16 billion) as of three days before the auction, the report said.The use rights of five residential sites, with a total of 170,000 square meters of land, were scheduled for bids, according to information released by the Shenzhen Land & Real Estate Exchange Center.The scarcity of land in Shenzhen helps the auction draw great attention in the industry, and it is the city's largest during the past two decades, Song Ding, a research fellow at the Shenzhen-based China Development Institute, told the Global Times on Monday.In 2018, 10 residential sites were auctioned in Shenzhen, with a total area of 158,600 square meters and transactions worth 9.8 billion yuan, according to information from industry website sz.news.fang.com.The city will continue to supply residential sites in the second half of the year to stabilize expectations in the local housing market, the report said, citing local authorities."The auction showed Shenzhen's demand to replenish its housing inventory, which wasn't that large, and the local government has been beefing up efforts to ease scarce land supply," said Yan Yuejin, research director at E-house China R&D Institute.Yan told the Global Times on Monday that making more land available will help stabilize local home prices.A signal has been sent - the local housing market will advance in a stable manner, analysts said, noting that acquiring land will also be conducive for companies to raise funds and grab more market share.The average price of new commercial residential housing in Shenzhen rose 0.4 percent month-on-month in May, according to the National Bureau of Statistics.