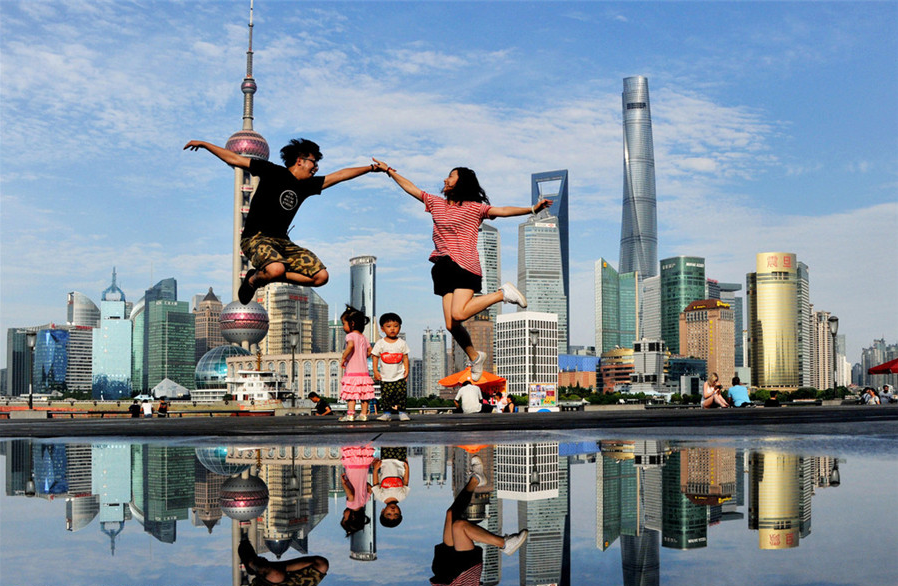 Tourists pose for photos at the Bund after a rainstorm with the skyline of Pudong's Lujiazui Financial District in Shanghai. [Photo/IC]

The high-level opening-up of China's financial sector will be one of the key drivers to promote reforms and prevent risks during the 14th Five-Year Plan (2021-25), as the economy is set to recover and become the top global performer this year, according to a policy suggestion report released by a high-profile think tank on Sunday.

China needs to expand the opening-up of the financial industry to pursue high-level economic opening-up, said Lu Lei, deputy head of the State Administration of Foreign Exchange. Expanded opening-up can also help ease the negative effects of China-US frictions and anti-globalization sentiment in some countries.

The nation needs to build an international financial hub and provide renminbi-denominated financial assets worldwide, which requires promoting the interconnection between Chinese and global financial markets and cultivating global trading markets, said Lu, who is also a member of the China Finance 40 Forum think tank.

Lu's suggestions are part of the Jingshan Report released by CF40 on Sunday. The report proposes economic and financial policies for China's 14th Five-Year Plan, which maps out key development pathways and goals.

Lu and his CF40 colleagues estimate that major economies will maintain an accommodative monetary policy, including unconventional measures such as quantitative easing and subzero interest rates in the coming years, which will affect China's monetary and financial policies.

The SAFE official highlighted the necessity of deepening market-oriented reforms of the interest rate and exchange rate mechanisms, including improving setting benchmark interest rates and using reform measures to facilitate the efficiency of monetary policy transmission.

"We will continue to push forward the reform of the market-oriented exchange rate system, improve the managed floating exchange rate regime based on market supply and demand, with reference to a basket of currencies, and maintain the flexibility of the renminbi exchange rate. The exchange rate should play a role in macroeconomic adjustments and be an automatic stabilizer of the international balance of payments," Lu added.

In the CF40 report, policy advisers called for taking advantage of the domestic "super-scale markets" of goods and services, labor and financial products to facilitate the "dual circulation" model of economic growth.

China is aiming to steer its economy toward internal demand drivers with the recent announcement of the "dual circulation" model, in which "internal circulation" takes a dominant role and "external circulation" additionally supports the economy. The country's top policymakers have reiterated this year that stance as a core policy tone for the development plan for the next five years.

Given the increasing external uncertainties caused by rising protectionism and the COVID-19 pandemic, regulators need to pay great attention in the short-term to fluctuations of cross-border capital flows and further facilitate the flexibility of the renminbi exchange rate while leveraging "macro-prudential" regulatory measures to offset the potential risks, said Wang Xin, head of the research bureau of the People's Bank of China, the central bank.

"As we expect China will be the only economy to achieve positive GDP growth this year, and the international balance of payments is likely to maintain a surplus, renminbi-denominated assets will remain attractive for international investors," Wang said.

Moody's Investors Service has revised its forecasts for China's economic growth, as a result of the second quarter's actual economic performance. The rating agency raised the 2020 growth forecast for China to 1.9 percent from 1 percent, thanks to a stronger-than-expected rebound in real GDP in the April-to-June period.

"Fiscal stimulus measures that have facilitated China's (second quarter) rebound on the production side are reflected in the strong pickup in industrial production and fixed-asset investment," according to a Moody's research note.